Black 19 drives to the basket and jumps to make a lay-up. Defender White 98 is standing in contact with the no-charge semicircle line. A contact occurs and the referees call an offensive foul.

Article 33.3 A defensive player has established an initial legal guarding position when:

Outcome: Correct decision. White 98 established a legal guarding position before Black 19 jumped into the air. Even though White 98 was inside the no-charge semicircle, the contact created by Black 19 with his knee must be penalized. As Black 19 still had the ball in his hands when the contact occurred, this is team control foul.

Blue 11 receives the ball and shoots to the basket. After the ball has touched the ring, defender Yellow 15 taps the ball away from his basket. The game continues.

Outcome: Incorrect decision by the referees. When Yellow 15 touched the ball, some part of the ball was within the basket and below the level of the ring. This touch prevented the ball from passing through the basket. An interference violation should have been called and 2 points should have been awarded to Blue 11.

Black 10 receives the ball and jumps to shoot. After the ball has left his hand, defender Yellow 27 blocks the ball. The referees call a goaltending violation.

Article 31.2.1 Goaltending occurs during a shot for a goal when a player touches the ball while it is completely above the level of the ring and:

Outcome: Correct decision by the referees. The ball was already on its downward flight to the basket when touched by Yellow 27. Black 10 was awarded 2 points. 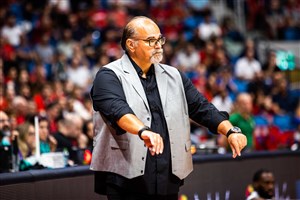 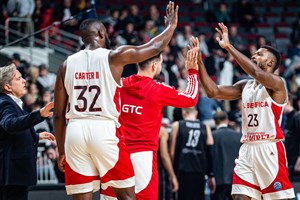