During the last minute of the game, Pink 1 gets the ball and attempts a jump shot. Defender Yellow 44 tries to block the shot. On the landing, there is a contact and the referee calls a personal foul in the act of shooting and awards 3 free throws to Pink 1.

Art. 33.6 states “A player who has jumped into the air from a place on the playing court has the right to land again at the same place. He has the right to land on another place on the playing court provided that the landing place and the direct path between the take-off and landing place is not already occupied by an opponent at the time of take-off”.

Outcome : Correct decision from the referees. When Pink 1 jumped for the shot, the spot where he finally landed was free, so he had the right to land there.

Purple 20 drives to the basket and takes the ball in his hands for a lay-up. Defender White 31 tries to reach the ball but creates a contact in Purple 20’s arm. After the foul, the White Team Coach complains the decision in an open and demonstrative way. He is charged with a technical foul.

Art. 36.3.2 says “The free throw (for the technical fouls) shall be administered immediately, regardless whether the order of any other possible penalties for any other fouls has been determined or whether the administration of the penalties has been started.”

Outcome : Correct decisions from the referees. The contact created by White 31 is a personal foul in the act of shooting. Purple 20 shall attempt 2 free throws. The technical foul to the coach will be penalized with 1 free throw that may be attempted by any player of the Purple Team. This free throw will be the first to be attempted. Then, the free throws for the personal foul will be attempted.

Tough Call 3: Iberostar Tenerife vs Filou Oostende – Foul not in the Act of Shooting

Red 22 drives to the basket while Yellow 25 is guarding him. A contact occurs and the referee calls a personal foul to the defensive player, saying that the basket is valid and awarding an extra free throw to Red 22.

Art. 15.1.3 states “A continuous movement in the act of shooting begins when the ball has come to rest in the player’s hand(s) and the shooting motion, usually upward, has started.”

Outcome : Incorrect decision from the referees. The foul was committed before the ball had come to rest in Red 22’s hands.  After the illegal contact happened, the ball still bounced on the floor before being caught by Red 22. A personal should have been called to Yellow 25, the basket should have been cancelled and the ball should have been awarded to the Red team for a throw-in from the free-throw line extended (art. 17.2.9) with 14 seconds on the shot clock.

White 9 secures a rebound and starts a fast transition. Black 10 is following him when White 9 changes his path and a contact occurs. The referees call a personal foul to Black 10. Afterwards, they use the IRS to decide if the foul should be upgraded to Unsportsmanlike Foul or not. Finally, the decision was that the contact was just a personal foul.

Art. 33.2 says “During the game, each player has the right to occupy any position on the court not already occupied by an opponent.”

Art. 33.4 says “When guarding a player who controls the ball, the elements of time and distance do not apply. The player with the ball must expect to be guarded and must be prepared to stop or change his direction whenever an opponent takes an initial legal guarding position in front of him.”

Art. 37.1.1 says “An unsportsmanlike foul is a player contact foul which, in the judgement of an official is an unnecessary contact caused by the defensive player in order to stop the progress of the offensive team in transition.”

Moreover, this foul cannot be considered Unsportsmanlike Foul as it doesn’t meet the criteria to be considered an unnecessary contact, but an unavoidable illegal contact.

Red 33 receives the ball in the low post play being closely guarded by White 12. White 12 defends his position with his forearm within his cylinder. On the reverse movement, red 33 extends his right arm outside his cylinder and creates a contact with White 12’s head. The referee calls a team control personal foul. Then, the referees use the IRS and decide that the foul should be upgraded to Unsportsmanlike Foul.

Art. 37.1.1 says “An unsportsmanlike foul is a player contact foul which, in the judgement of an official is excessive, hard contact caused by a player in an effort to play the ball or an opponent.”

Outcome : Correct decision from the referees. The contact created by Red 33 against the opponent’s head meets the criteria to be called as Unsportsmanlike Foul. White 12 shall be awarded 2 free throws followed by a throw-in for the White team from the throw-in line in White team’s frontcourt with 14 seconds on the shot clock.

In this clip we can see two consecutive offences by the Black Team. In the first one, Black 21 attempts a hook shot and in the second one Black 0 drives to the basket and releases the ball for a shot. The referees don’t call any infraction. During the next transition, the referee calls a technical foul to Black 21 for complaining. 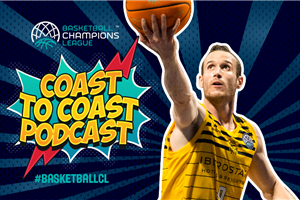 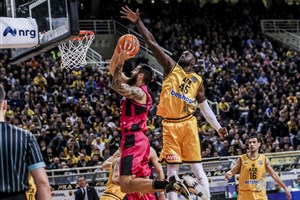