MIES (Switzerland) - Lietkabelis conjured a last-gasp victory against the odds in Israel to grab the final ticket to the Play-Offs in dramatic fashion, breaking the hearts of both Holon and Manresa fans in the process. Earlier on Wednesday night, Burgos put on a convincing display to take home the penultimate postseason berth.

Let's have a closer look at the eight games that concluded Group A and Group B action, and with it the 2019-20 Regular Season:

With ice running through this veins, Paulius Valinskas sunk three free-throws with just nine tenths of a second remaining to lift Lietkabelis to a 69-68 victory at Holon that earned the Lithuanian side the final ticket to the Play-Offs.

The hosts appeared to be within reach of the postseason berth when Guy Pnini knocked down a triple 2:23 from the final buzzer to give them a 68-63 lead.

Tomas Dimsa however scored with a layup 1:15 from the end to reduce the deficit to 68-66 and T.J. Cline missed a shot for Holon, with 21 seconds on the clock.

Zeljko Sakic brought the ball up, drew several Hapoel defenders and kicked out to Valinskas, who was fouled as he rose for a three-pointer.

After the game hero made all three shots from the stripe Holon called a timeout and drew a play for Troy Caupain, but his contested shot from eight meters out fell short.

Sakic paced Lietkabelis with 17 points and 9 rebounds, Dimsa had 16 points while man of the night Valinskas finished with 10 points. Marcus Foster had 17 points for Holon in a losing effort.

Sassari held off Manresa down the stretch for a 64-61 win that was not enough to propel them to first place in Group A, but had devastating consequences for the Spanish team, who missed out on the Play-Offs.

The Italian side improved to 11-3 in the standings but finished second in the group as Turk Telekom escaped victorious from Strasbourg. Manresa on the other hand dropped to 7-7 and, in combination with other results in the group, dropped from third to fifth place literally in the final minute of Regular Season action.

Manresa came from behind to grab a 42-40 lead midway through the third quarter but Stefano Gentile drilled a step-back triple from the top of the key with 6:43 remaining in the period to spark a 9-0 Sassari run.

The Italian team turned on the screws on defense and held on to its slim lead the rest of the way, as Manresa had the final possession with about 2 seconds left on the clock but failed to fire off a shot.

Miro Bilan paced Sassari with 14 points and 8 rebounds while Dyshawn Pierre, who also had 8 boards, added 12 points. David Kravish was the only Manresa player to score in double digits and finished with 11 points and 4 rebounds.

Turk Telekom survived a tight finale in France to edge out Strasbourg 90-89 and consequently edge Sassari for first place in Group A.

In a contest that featured 22 lead changes and never saw either team lead by double digits, the two teams entered the final second tied at 89 but Moustapha Fall drew a foul and went to the stripe.

Turk Telekom's big man split his free-throws and Damien Inglis's desperation triple fell short, for the visitors to celebrate the road win that gifted them first place in the group.

Kyle Wiltjer led the way for the winners with 32 points, his second-best offensive showing of the season, and added 8 rebounds, while Muhammed Baygül chipped in with 19 points. For Strasbourg, Boris Dallo finished with 23 points and 4 rebounds in a losing effort.

Oostende had the final word in a back-and-forth encounter in Poland and clinched a 75-70 win over Torun that lifted the Belgian side to third place in Group A.

The visitors had already secured a place in the postseason, but they improved to 8-6 in the standings thanks to this victory, while Torun dropped to 2-12 and finish bottom of the standings.

MiKyle McIntosh scored with a layup 8:03 from the final buzzer to put Oostende in front once and for all, 61-60, after 16 lead changes on the night. The Belgian side held on until the end as Torun struggled from long range, shooting only 23.5 percent from beyond the arc.

Earl Clark fueled a dominant second-quarter stretch by Burgos for the Spanish team to turn the tables on Vechta and prevail 87-71, earning a trip to the postseason in their maiden European campaign.

Burgos improved to 8-6 in the standings and took third place in Group B, courtesy of their head-to-head advantage over Bandirma, that also had an 8-6 record. Meanwhile Vechta, who were also playing in a European competition for the first time in club history, finished in fifth place on a 6-8 record and their campaign ends here.

Vechta needed to win by seven points to have any options of advancing to the Play-Offs, and they started off like a team on a mission.

The German side led 25-22 with about seven minutes left to halftime but Clark came up with 16 points, 6 rebounds and 2 blocks in that final stretch of the second quarter to instigate a 21-9 burst.

The hosts led by 12 points at the halftime buzzer and although Vechta managed to reduce the deficit to eight late in the third frame, Burgos scored the first eight points in the final stanza and cruised the rest of the way.

Clark finished with a double-double of 21 points and a season-high 12 rebounds, also adding 4 blocks, while Vítor Benite chipped in with 18 points, 5 assists and 5 boards. Ishmail Wainright and Jordan Davis finished with 14 points each for Vechta in defeat.

AEK used a 16-3 burst just before the halftime buzzer to gain control on proceedings and clinched an 83-72 win over Anwil to seal second place in Group B.

The Greek side finished at 9-1 while Anwil will exit the competition as sixth in the group, on a 5-9 record.

The Polish side got off to a strong start and were holding a 35-28 lead when 18-year-old Greek international Nikos Rogkavopoulos drilled a three-pointer 3:52 from the end of the second frame to help spark AEK's reaction.

The hosts jumped ahead 44-38 at the interval and never allowed Anwil to come any closer after the break, thanks in great part to the big contribution of their bench, that had 39 points compared with 19 from the visitors' bench.

Rogkavopoulos and Linos Chrysikopoulos finished with 15 points each while Anwil's Shawn Jones collected a double-double of a game-high 21 points and 14 rebounds in a losing effort.

Hapoel shifted gears midway through the third quarter to pull away from Antwerp and celebrated finishing top of Group B with an 88-73 success in Belgium, extending their winning streak to five games.

The Israeli team finished on an 11-3 record and have secured homecourt advantage through the Play-Offs, while Antwerp finished bottom of the group at 4-10.

The encounter featured 11 lead changes early on but, with the scores tied at 50-all and 7:10 remaining in the third frame, J’Covan Brown sunk a pair of free-throws to spark a 16-3 Hapoel run.

The Israeli team led by as many as 16 points down the stretch and the hosts had no energy left to mount a comeback attempt.

Tamir Blatt had 13 points and 3 assists to lead a multidimensional offense, as 11 Hapoel players wrote their name on the scoresheet. Antwerp's Dave Dudzinski finished with a game-high 15 points and 7 rebounds in defeat.

Teksut Bandirma closed out the Regular Season on a four-game winning streak as they built an early 22-point lead and kept Pau at arm's length the rest of the way for an 81-66 victory.

The Turkish team improved to 8-6 but stayed in fourth place in the group as Burgos, who had the head to head advantage with the Turkish team, took third. Pau meanwhile dropped to 5-9 and finished seventh in the group.

The hosts raced to a 22-11 lead on an Omar Prewitt dunk 1:43 from the first buzzer and never allowed the visitors to come within striking distance again. 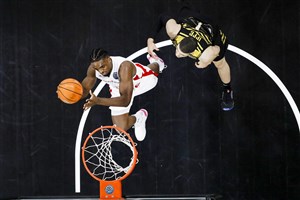