The Basketball Champions League has made history.

Basketball Champions League CEO Patrick Comninos says the competition has a hugely exciting future following the success of its debut season which climaxed with Iberostar Tenerife being crowned the inaugural winners.

"History was made here and I'd like to congratulate Iberostar Tenerife on becoming the first winners of the Basketball Champions League," he said. "They say even the longest journey starts with a single step and this was a massive stride in the right direction.

"The vibrant and passionate atmosphere in the arena in Tenerife was simply amazing and we couldn't have wished for a better stage for the final. The entire island of Tenerife was buzzing and this made for the ideal images to conclude this season. Our first Final Four weekend marked the climax of a remarkable year in which a brand-new sporting competition was born and began to take root in the hearts of passionate fans here and across Europe."

Basketball Champions League, which is co-owned by FIBA and 10 national leagues, was launched to ensure that clubs from leagues across the continent can compete in top-class continental competition based on merit.

Comninos explained the rationale for the competition, saying: "This is about serving the clubs and providing a competition which enables them to develop and become stronger. European club competition drives up standards on the court and that will translate into stronger and better competition in domestic leagues and, ultimately, national teams.

"Basketball Champions League does not exist for its own sake but as part of a broader strategy to grow basketball across Europe. It is based on established sporting principles of inclusion by merit rather than commercial brand value, and is an integral part of the new European basketball eco-system.

"The competition was true to its values and delivered on its goals as our competition welcomed 18 national champions." Tekele Cotton (MHP Riesen Ludwigsburg): "I've enjoyed this Champions League a lot. They're on top of everything. I feel like for the first year, there are a lot of great teams in it, a lot of great competition in it. There have not been any games that we've been able to take lightly and the way that they broadcast their league and the way they do their (social) media is phenomenal. I'm glad to have been a part of it."

Thaddus McFadden (PAOK) is just happy to be playing in the Basketball Champions League: "It's well organized. You know how the NBA promotes things? It's like that. The league has got the highlights after every game. It's a great league to play in. I see nothing but good for the league, great teams. This first year has been amazing. You might expect that after 15, 20 years. But the first year? That's amazing."

Rodrigo San Miguel (Iberostar Tenerife): "I see that they put the results and information very fast and I think it’s great for fans to be able to monitor things instantly."

Zack Wright (AS Monaco): "You did a great job with this competition this year. For it being the first year, I'm extremely impressed! Keep up the good work!"

Rion Brown (Kataja): "I really enjoyed playing in the Champions League this season. I hope I get the opportunity again next year. This was a great experience."

Troy Barnies (Szolnoki Olaj): "Cheers with everything you all are doing with the league. You're doing a fantastic job."

Frank Robinson  (Partizan): "You guys did great for the first season and overall. Thank you from myself and our team for the professionalism."

John Patrick (Head Coach of MHP RIESEN Ludwigsburg): "We went into it wide-eyed, without really any assumptions and we were excited about the idea of playing in the Champions League in the initial season. It's certainly exceeded any experience we've had before, to be in an initial group with Sassari, Besiktas, AEK, Partizan, Zielona Gora. Our fans also caught on very quick to the level of the Champions League and understood pretty quickly what an elite competition it is so, it's been kind of a movement, understanding that this thing is for real and then that we can have some success has been motivating for everybody." 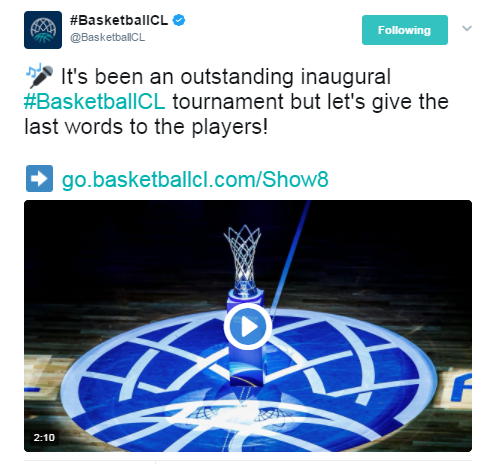 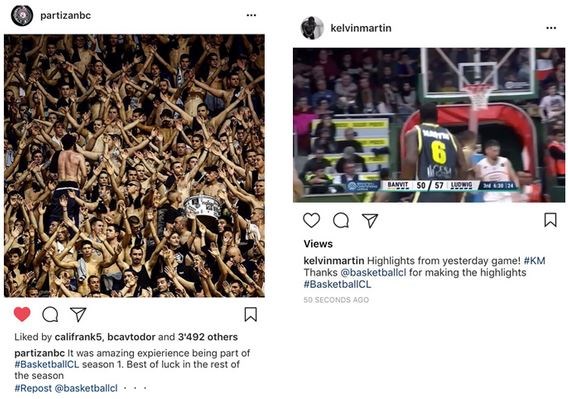 The decision to increase the prize to the magic million mark was taken after consultation with clubs and is both a clear performance incentive and a statement of intent from Basketball Champions League which launched in 2016-17 to provide high-level international club competition for teams which qualify on the basis of their performances in domestic leagues.

The second season of the Basketball Champions league gets under way on Tuesday September 19 with the first of three home and away Qualifying Rounds. Qualification will provide 8 clubs who will join 24 pre-qualified clubs for the Regular Season starting on Tuesday October 10.

The Regular Season will consist of four groups of eight clubs and will be played over 14 gamedays followed by a Round of 16 and Quarter-Finals (all played in a home and away format) to provide the Final Four. The venue will again will be selected from among the qualifying clubs' cities.

The 2017-18 Basketball Champions League has been formatted to encourage the development of local talent and clubs will be required to include at least five home grown players in a 11-12 player roster or at least four in the case of a roster of 10. Home grown players are defined as those registered with the National Federation of the Club for at least three seasons between the ages of 12 and 20.

WHAT IS IT ALL ABOUT? DEFINING BASKETBALL CHAMPIONS LEAGUE

Basketball Champions League has been designed to strengthen club basketball across Europe and, in doing so, boosting national teams as well as promoting the growth of the sport in Europe and worldwide.

It represents innovation and fresh thinking at every level and is designed to be:
- Inclusive
- Performance and talent-driven
- Based firmly on sporting principals which always come first
- Leagues and FIBA own it
- It aims to benefit all of basketball
- Hard-wired into the basketball ecosystem
- It reflects the breadth and diversity of European club basketball