MIES (Switzerland) - If there is one common thread in the views of the coaches that will do battle in Group C of the 2020-21 Basketball Champions League, is their admiration towards the 2019-20 MVP, Keith Langford, and AEK in general.

The group includes the Athens yellow-blacks as well as BCL newcomers Cholet, BCL old hands Hapoel Holon and Tsmoki Minsk, who fought their way through qualification to reach the Regular Season.

We asked each coach 10 questions to help us preview Group C action, which tips off Wednesday October 20th:

Ilias Papatheodorou (AEK): The best coach for me is Stefanos Dedas and Hapoel Holon has the best roster, because they have experienced players who know how to play the game and Dedas is a suitable coach for them.
Erman Kunter (Cholet): I think most people would say that AEK has the best roster in our group, they played in the BCL Final for the 2019-20 season and in my opinion also AEK has the best roster.
Stefanos Dedas (Hapoel Holon): AEK is the best team in this group and one of the best in all of the BCL. They have created tradition in BCL all those years with two Finals appearances, one trophy and good results. They are the favorites for the first spot in the group.
Rostislav Vergun (Tsmoki Minsk): I think all the teams that participate in the group stage of the BCL are high quality opponents. AEK stands out a little bit since they have several high-level players with experience playing at the highest European level and they showed it by reaching the 2019-20 Final. So I would pick AEK as the favorite.

Ilias Papatheodorou: I think AEK vs. Holon and Cholet vs. AEK are the games to watch.
Erman Kunter: I think it would be our game against AEK.
Stefanos Dedas: I believe the best game to watch will be our game against AEK in our gym later on in the season, hopefully with our fans in the stands. If the situation is good and fans can return to the stands, I am sure that that game against AEK will be amazing to watch.
Rostislav Vergun: It depends, especially in the current situation with the pandemic. I would say every game deserves attention since every win has great value as teams look to advance. I expect a lot of close games that will go down to crunch time and the level of skill these teams have promises a lot of spectacular moments.

Which of the games in this group will be the toughest for your team and why?

Ilias Papatheodorou: The games at Cholet and Holon will probably be the toughest for us because both of them have a good roster, play in good national leagues --the French and Israeli leagues, respectively-- and we have a tough schedule those two weeks.
Erman Kunter: The BCL has lots of good teams this year so I don't think there is anything like an easy game, every game will be very tough. The schedule says we play three times at home, we have to win those three games, but every game will be difficult.
Stefanos Dedas: The road game at Cholet will be important because they are our main rival for the second spot. Getting there requires a tough trip, combining airplane and bus travel, but we will try to prepare ourselves mentally and physically for the trip and for the game as well.
Rostislav Vergun: Coming from the Qualification Round, I don't expect us to have any easy games in this group. I respect all three opponents and I would consider them the favorite in our direct matchups. Of course when there is a direct flight it makes things a bit easier, but at this stage and time I don't think it matters so much. We will try to do our best in every game.

Ilias Papatheodorou: One of them is Robert Lowery of Minsk, I know him well and I know he is a player full of energy, it's very difficult to play against him.
Erman Kunter: At the moment we have not yet scouted in depth all teams and all players but on paper AEK have two-three very good players like Keith Langford, Holon have already played in France and while we don't know too much about Minsk we know that they are always participating in European competitions.
Stefanos Dedas: Definitely Keith Langford is the top player in our group and maybe in all BCL, as far as achievements in his career are concerned. His profile and his 2019-20 MVP award speak for themselves.
Rostislav Vergun: I would pick Keith Langford as somebody who stands out, he is a really unique player. He has the ability to create with the ball, he can resolve any situation on his own.

Name one or more players in this group which you expect to be a positive surprise (can be a player on your team).

Ilias Papatheodorou: Nikos Rogkavopoulos [of AEK] is one of those players, he is young, he works really hard every day and I think he will be a positive surprise this year. The second one is Terrell Parks of Cholet, he is much better than people think.
Erman Kunter: As I said, we haven't scouted all teams yet but I think we have on our team two or three youngsters who are very good prospects and can be good players in the future. I think BCL is the second competition in Europe after the EuroLeague, so I expect there to be a lot of talent, which we will see when the competition starts.
Stefanos Dedas: It's difficult to predict but the Greek small forward Nikos Rogkavopoulos has the potential to surprise as a prospect. He showed some of his abilities at the Final 8.
Rostislav Vergun: I really want my players to be the ones who surprise others. It's a huge challenge for us as a team and I hope for my players as well, to establish themselves at this level. I would like Maksim Salash to demonstrate that he is ready for the next step.

Ilias Papatheodorou: Holon play an interesting type of game, they play really fast and are a very good offensive team.
Erman Kunter: We know that French teams play differently compared to the other teams, for example AEK will try to control the pace, Minsk plays a little bit of eastern style of basketball, while Holon plays in a similar to us way. So there will be a clash of two different styles, on one side an eastern style and on the other there will be us and Holon, playing faster, with more fast-break situations etc. It will be a very interesting group.
Stefanos Dedas: All three opponents play regular basketball. AEK base their game on Langford's talent while Cholet and Minsk rely on the size of their domestic players. It's hard to say that some of our opponents play interesting basketball. I believe we play the more exceptional style and I am sure that fans will realize it during the games.
Rostislav Vergun: This is a hard question, I would say that they are all different and I give tremendous respect to all of them and I can't pick one of them. I would say that on any given night we will see matchups between different styles and it will be down to which one is better on that particular night.

Ilias Papatheodorou: AEK will probably have the slowest pace and Cholet the fastest.
Erman Kunter: We will try to play with the fastest pace, to be the quickest team, and I think AEK and Minsk will try to control the tempo of the game.
Stefanos Dedas: French teams like Cholet have the athleticism to run the floor well, something that we have to be aware of. In the set game, I think AEK because of their quality can have the effective slowest pace as a typical Greek coach is on it. We try to combine both. We will see.
Rostislav Vergun: I don't think anyone is trying to play slow, the modern game requires the ability to maintain a good solid pace of game, so the level of players which everybody has will give the opportunity to play fast, depending on how deep a team you have. As I said at the start I would pick AEK as the favorites because of their level of talent and because they look to be a little bit deeper.

Ilias Papatheodorou: Tel Aviv (Holon is just south of Tel Aviv center)
Erman Kunter: I've been once in Minsk and it was really, really cold, it's one of the coldest cities in Europe. I've been of course in Tel Aviv and since I am originally from Turkey, our food is similar to Greek food, so I would like to stay and eat in Athens - if, of course, the president is paying!
Stefanos Dedas: I have visited Cholet twice with my former teams, PAOK and Spartak St. Petersburg, and I have been to Minsk three times with Spartak and Gaziantep. As I am Greek, I've been to Athens many times. For sure Athens is the best place for me to visit either for a game or for tourism. Definitely Athens has the best quality to spend time in restaurants. I am sure every president would like to pay dinner in Minsk cause it's way cheaper than the other two cities (he laughs).
Rostislav Vergun: I recommend Minsk to everybody and for me I would pick Athens. I've never been there before but as a historical place and with all the city sites there are to see, Athens is the top place in our group.

Ilias Papatheodorou: Yes, it could be.
Erman Kunter: I don't know who will win the trophy, it's too early to say, it depends on which teams will have their full roster, so I really can't say anything.
Stefanos Dedas: Yes.
Rostislav Vergun: Yes 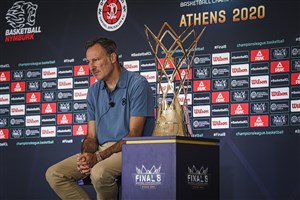