NYMBURK (Czech Republic) - For most of Jakub Tuma's life, ERA Nymburk was the big giant of Czech Republic basketball. And after long fighting against the impenetrable force, Tuma joined Nymburk with the main goal of getting better - and winning some hardware wouldn't hurt either.

Tuma will turn 22 years old in September - which means the last time a team other than Nymburk won the Czech league crown was Opava in 2003 when Tuma was 4 years old.

"It's an amazing number," Tuma said of Nymburk's run of 16 straight domestic titles going into the 2019-20 season. "Before I joined the club I knew that Nymburk had a huge history, and during my childhood, everything was about Nymburk, everyone knows that they are the best."

Tuma is at the end of his first season with the club, and he said everyone's perceptions about Nymburk were dead on.

"I found out why are they the best. Everyone knows what to do: like one big team - and not only the players, everyone is professional."

While Czech Republic is gaining ground in basketball, ice hockey is one of the biggest sports in the country and the Czechs are one of the best teams in the world - 1998 Olympic gold medallists and six-time world champions. In fact, Milan Hnilicka, who was on the 1998 Olympic team and guided the Czechs to Olympic bronze in 2006, hails from the same home town as Tuma - Litomerice, near the German border.

"I remember going to the ice hockey stadium every Sunday morning to learn ice-skating when I was around 6 years old. I was also doing judo for one year, because my father used to do judo when he was younger," Tuma remembered of his time in the city of about 24,000 people.

He discovered basketball through his classmates in first grade and he hasn't stopped since.

"Of course, just like every young basketball player I liked Michael Jordan, because he was the greatest and the image of the basketball," said Tuma unsurprisingly. "But now I admire Marcelinho Huertas. I watch him and I like how he is playing. He can read the game perfectly."

Tuma's team Nymburk played against Huertas' Iberostar Tenerife twice this BCL season - losing at home on Gameday 4 but winning in Spain on Gameday 11. Tuma was not on Nymburk's roster for either game as he is still working his way into Oren Amiel's team. The 6ft 4in (1.92m) playmaker has played in four games and averaged 1.8 points, 2.5 rebounds, 1.8 assists and 0.8 steals in nearly 12 minutes. He made his BCL debut on December 3, 2019 on Gameday 7 at Peristeri winmasters.

"It is faster and tougher than, for example, the Czech league. I tried to give my maximum," said Tuma, who picked up 4 points, 5 rebounds, 1 assist and 1 steal in 11 minutes. "In the beginning I was nervous, but as time went on, it was better, and I was gaining confidence."

His third appearance was his most productive in a blowout of Mornar Bar on the road in Gameday 13.

"It felt great. We tried to spread the minutes among all the players plus we won, so that was the best for the team. Nobody was tired and they could give their best," said Tuma, who scored his first basket - a three-pointer - in scoring 3 points to go with 2 rebounds, 4 assists and 2 steals.

Tuma's road from Litomerice to Nymburk included a meaningful five-year stay in the Czech capital Prague - located about 70 kilometres away - and playing for USK Prague.

"When I was 15 years old I decided to go to USK. Litomerice and USK were cooperating with each other. I needed to get used to the bigger city, but for me it was better. There were more things to do," Tuma said.

Injuries to many of USK's players during the 2018-19 season meant coach Dino Repesa called Tuma's number much more often starting in January.

"I was so happy that I could finally show what's inside me. But at the end, I was really tired because I played so many minutes."

Tuma stepped up his game even more in the playoffs, averaging 15.0 points, 5.0 rebounds and 3.0 assists in 33 minutes against Brno. His production got even better in the Quarter-Finals against Nymburk, collecting 15.5 points, 1.8 rebounds, 5.5 assists and 1.8 steals in 39 minutes per game in a four-game Nymburk sweep of USK.

"Suddenly I had bigger role than usual, and I needed to prove it, so I just played my game: creating for others and trying to finish. I think I played solid for those two weeks and it really went well for me," Tuma remembered.

Tuma's play early on at USK garnered attention from the Czech federation as well and he played at two FIBA U18 European Championships. In 2015, he was a year younger than the rest of the competition and could not keep the Czechs from finishing 16th and being relegated to Division B. 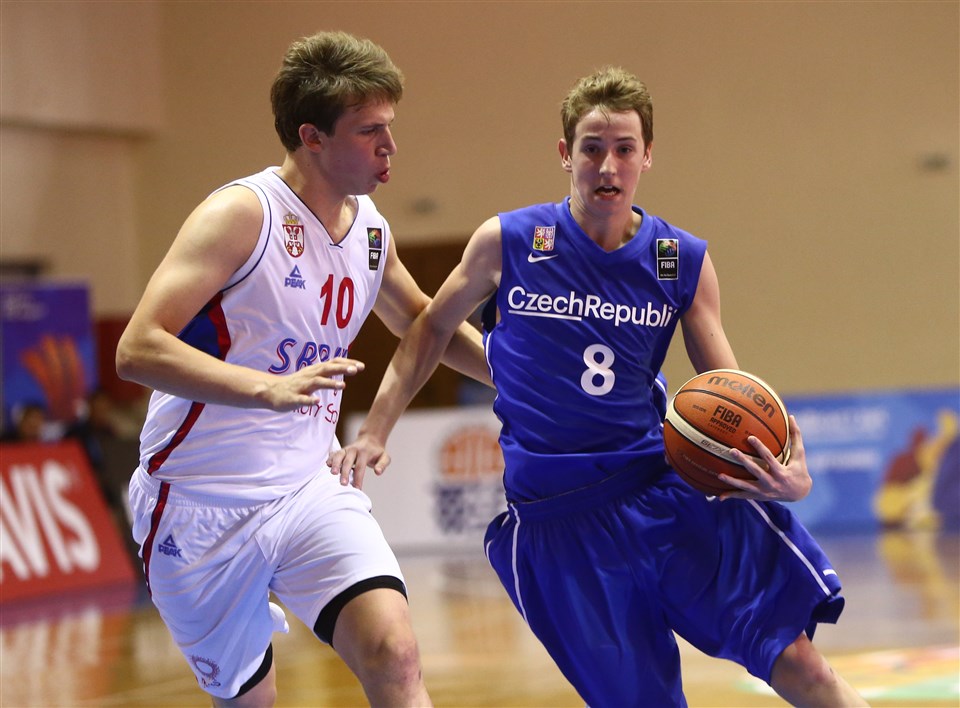 "It's not a good memory, but it happened," he said of the summer in which he contributed 1.8 points, 2.1 rebounds and 1.6 assists. "We were disappointed, but the best thing I could get from that is the mentality. In that time we couldn't match the other teams' mentality."

The next summer in Division B, the Czechs lost to Ukraine in the Quarter-Finals to miss a chance to get back up, finishing eighth while Tuma averaged 7.8 points, 5.3 rebounds, 2.9 assists and 1.3 steals.

"Of course, it was disappointing for everyone in the team, although we played really good basketball that night," he said of the 67-62 loss in which he had 6 points, 3 rebounds and 8 assists. "We thought we could advance and beat Ukraine, because we had a strong Group Phase and we thought we are ready to play against them."

Tuma suffered another major disappointment in 2017 as the Czechs were relegated from Division A at the FIBA U20 European Championship, losing to Italy in the Classification 13-16 game. The Czechs were up 53-50 with 1 minute left and Tuma missed two free throws with 40 seconds remaining and the game even at 53-53. A questionable foul at the end of the game led to Italy hitting the game-winning free throws to send the Czechs to Division B.

"I'm trying to learn something from every game. In that one, it's that you cannot rely on something at the end of the game because everything can happen there. For example, they called that questionable foul, but if we made those two free throws before, it could have been different," said Tuma, who averaged 9.1 points, 2.9 rebounds, 2. 4 assists and 1.1 steals.

Tuma tried to help the Czechs get back up to Division A the following summer but his 10.4 points, 4.5 rebounds, 3.5 assists and 1.5 steals were not enough as the team lost to Poland in the Quarter-Finals and finished sixth.

"It was a honor for me to be part of the team which went to the World Cup. I was excited to practice with the best players in the Czech Republic and it always gives you something extra. You need to do things quicker and stronger and so on," Tuma said of the training camp.

He did did not end up making the team for China but Tuma did watch every game as the Czechs finished a surprising sixth in their first appearance in the global spectacle.

Instead of playing for the Czechs in China, Tuma was selected for the Czech team at the 2019 Summer Universiade in Italy in July. And despite being the youngest player on the team, he averaged 8.3 points, 1.3 rebounds, 2.8 assists and 1.2 steals.

"It was almost like an Olympic Games, and I really enjoyed it: every sport in the world in one city," he said. "I met there plenty of players against whom I played at European Championships."

Move to the best

After returning from Italy, Tuma locked up a four-year deal Nymburk, moving to the country's superpower for two major reasons.

"Mainly, it was because of the Basketball Champions League," he admitted while also saying: "I need to use my potential properly and I think Nymburk can help me. The coaches want me to play good defense and create space for our shooters."

Besides playing in the BCL, one of the 2019-20 season highlights for Tuma came on October 24 as he faced off against his former team USK Prague.

"It is always a challenge to play against your former team, so I took it like that. On the other hand, it was a weird feeling to play against players you have known for so many years," he said of the game in which he scored a season-high 10 points in 17 minutes.

With the Corona virus putting life as we knew it on hold, that also means a stop on basketball - and therewith Tuma's first season with Nymburk. When asked to look back on his biggest memories of the 2019-20 campaign, he said: "The best memories will be of playing against really good players with lots of experience. I would like to take something from them and use it in my future." 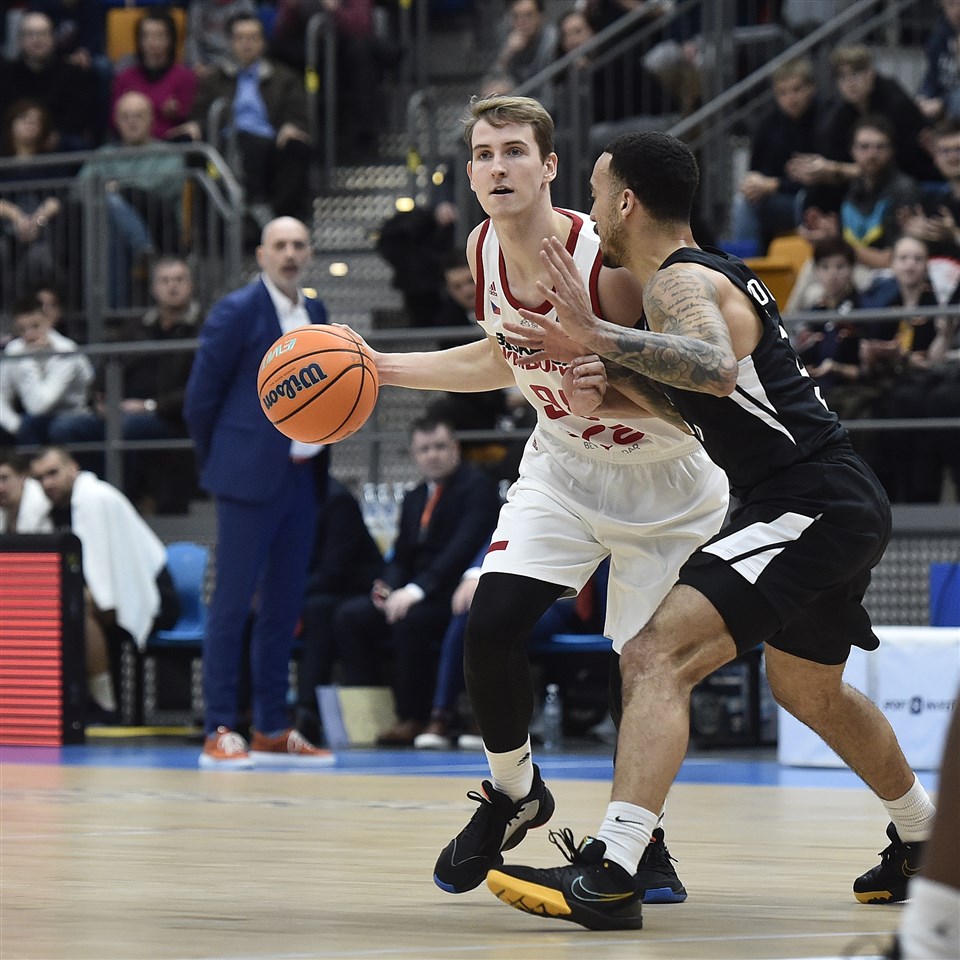 The future as planned right now has Nymburk playing in the Basketball Champions League Final Eight from September 30-October 4, 2020 to crown a winner of the 2019-20 season.

"It will be interesting because the teams who have advanced there will be different in September because it's going to be the pre-season for the next season. But at least we can finish what we started."

And for Tuma that would a chance to win some hardware - something he expects to do plenty of with ERA Nymburk. 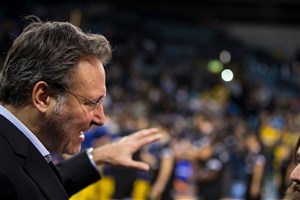