MIES (Switzerland) - Even by MHP Riesen Ludwigsburg's standards, the summer of 2022 will go down as an extremely busy one, with one of the biggest changes happening next to the court. John Patrick is no longer the playcaller.

Patrick was in charge for the last nine years, winning three Bundesliga Coach of the Year awards, and one BCL Coach of the Year trophy, as well. When it was evident he would not remain Ludwigsburg's head coach in 2022-23, he recommended Josh King for the job, and the Board agreed.

King is 36 and knows the system very well. He was John Patrick's assistant coach from 2018 to 2021, and left the club to start his own head coaching career with USK Prague in Czech Republic. Justin Johnson is coming in three months removed from the FIBA Europe Cup Final, which he played with UnaHotels Reggio Emilia. He is 26, stands at 2.01m/6'7'' and plays the forward position, with emphasis on defense and physicality.

Johnson played the NCAA with the Western Kentucky Hilltoppers, and went on to spend his first four pro seasons in Italy, getting 8.3 points and 5.9 rebounds per game in 2021-22.

Markell Johnson is a 23-year-old point guard who will take on Jonah Radebaugh's role from last season. Johnson spent four years with the North Carolina State Wolfpack, and started his European career with Besiktas in Turkey.

Last season he was in Lithuania with Pieno Zvaigzdes, averaging 12.0 points, 4.3 assists, 3.4 rebounds while shooting 42.1 percent from beyond the arc. He has averaged more than one steal per game in five of his six seasons on this level, and had 0.9 in the sixth one, back as a freshman in college.

Jhonathan Dunn is just a few months older than Markell Johnson. He stands at 1.93m/6'4'', also covers the point guard position, and he won the BNXT League in Belgium and the Netherlands with ZZ Leiden.

Dunn can go under the same kind of umbrella of stats as Johnson, doing a bit of everything, while excelling on defense with 1.2 steals per game last season. He can score in bunches too, as evident by his 17.9 ppg season in Landstede Hammers in the Netherlands in 2020-21.

Ben Shungu will be another solid name in the backcourt. Another 24-year-old, Shungu was a walk-on who had to earn a scholarship at Vermont, and went on to lead the team to two NCAA tournaments with his scoring and sheer strength.

Shungu has unlimited range from deep, he averaged 16.3 points and 4.6 rebounds in his final year at Vermont, and after a six year long college career, Ben is now motivated to start his pro career in Germany, and in the Basketball Champions League.

Jeff Roberson is a 25-year-old forward who is 1.98m/6'6'' tall, another man who fits right in with the Ludwigsburg policies. An all-rounder, he is up for his third European contract, after one in Trefl Sopot in Poland and another one in Gottingen in Germany.

He had 8.3 points and 4.7 rebounds last season, hitting 37.2 percent of his shots from beyond the arc. Roberson was even more impressive from three-point range in college, getting above 40 percent in three of his four seasons at Vanderbilt Commodores, including 45.5 in his freshmen season.

Sebastian Hartmann is the biggest domestic scoop for MHP Riesen Ludwigsburg. The 17-year-old guard is a member of the German U18 national team, and Ludwigsburg lured him in after he was in the Bayern academy in Munich.

At 1.95m/6'5'', Hartmann will soon be one of the most important pieces in MHP's rotation, but for now he needs to get his first senior minutes and points on the board.

Eddy Edigin is the only typical big guy joining the team over the summer. At 26, he has a couple of first Bundesliga seasons, and a number of big games in the Second Division.

Edigin played for the Hamburg Towers in 2021-22, appearing in 32 games off the bench, usually getting just under ten minutes with three points and three rebounds as his season averages.

Ludwigsburg are in Regular Season Group E, with Darussafaka, Hapoel Bank Yahav Jerusalem and a team from the Qualifying Rounds. 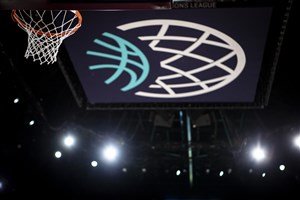