Blue 4 drives to the basket and makes a lay-up. A contact occurs with Yellow 21, and the referee calls a charging foul to Blue 4 and cancels the basket.

Article 33.4 When judging a charge/block situation involving a player with the ball, a referee shall use the following principles:

Article 33.6 A player who has jumped into the air has the right to land on another place on the playing court provided that the landing place and the direct path between the take-off and the landing place is not already occupied by an opponent at the time of take-off.

Article 10.3 The ball becomes dead when a referee blows his whistle while the ball is live.

Outcome: Correct decision from the referees. When Blue 4 took off, Yellow 21 had already occupied a position on the court with both feet on the floor and facing his opponent. This is a charging foul. The basket is not valid because the ball was still in Blue 4 hand when the foul was committed.

Green 8 makes a lay-up and a contact occurs with Yellow 18. The referee awards the 2-point field goal and calls a personal foul to Green 8.

Article 14.1.3 Team control ends when the ball has left the player’s hand(s) on a shot for a field goal.

Outcome: Correct decision from the referees. The ball had already left Green 8 hands when the contact occurred, so the basket is valid.  As the Green team was not yet in team foul penalty in the quarter (second foul), the game will be resumed with a yellow team throw-in from the place closest to where the foul was committed except directly behind the backboard.

Article 31.2.1 Goaltending occurs during a shot for a field goal when a player touches the ball while it is in flight above the level of the ring, and it is on its downward flight to the basket.

Article 31.2.3 The goaltending restrictions apply until:

F.3.1 The following situations may be reviewed when the game clock shows 2:00 minutes or less in the fourth quarter and in each overtime:

* Whether a goaltending or basket interference violation was called correctly.

Outcome: Correct decision from the referees. Red 5 committed a goaltending violation as he touched the ball on its downward flight to the basket above the level of the rim during a field goal. White 3 shall be awarded 3 points.

Moreover, a goaltending violation that has been called by the referees can only be reviewed with the Instant Replay during the last 2 minutes of the fourth quarter or overtime.

White 1 ends his dribble and makes a pass. The referee calls a travelling violation.

Art. 25.2.1 If a player who comes to a stop on his first step has both feet on the floor or they touch the floor simultaneously, he may pivot using either foot as his pivot foot. If he then jumps with both feet, no foot may return to the floor before the ball is released from the hand(s).

Outcome: Correct decision from the referees. White 1 came to a stop with both feet on the floor. He then lifted both feet and his left foot touched the floor before he released the ball for the pass. This is a travelling violation. 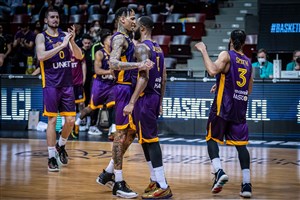 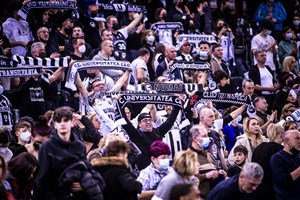