The White team steal the ball and White 44 drives to the basket. A contact between White 7 and Blue 0 occurs and the referee calls an offensive foul.

Article 33.7 Screening in an attempt to delay or prevent an opponent without the ball from reaching a desired position on the playing court.

Outcome: Correct decision from the referees. White 7 changed his direction and set a screen on a moving opponent without the ball, not respecting the elements of time and distance. Offensive foul for illegal screening. The game shall be resumed with a Blue team throw-in from the place nearest to where the foul occurred with 24 seconds on the shot clock.

On a rebound situation, Red 21 gets the ball and tries to dunk it. In his motion, the ball leaves his hands. Then Red 21 grabs the ring and the ball finally enters the basket. The referee cancels the basket.

Outcome: Correct decision from the referees. Red 21 committed an offensive interference as he grasped the basket and, in the judgement of the referee, this has caused the ball to enter the basket. The basket is not valid, and the game will be resumed with a White team throw-in from the throw-in line extended and 24 seconds on the shot clock.

When the Yellow team is in possession of the ball, there is a fight for the position in the paint. The referee calls a personal foul to Red 10. After a short communication, the crew chief decides to use the IRS to review a potential act of violence by Yellow 19.

OBRI F-4.17 In situations when an act of violence occurs which is not called immediately, referees are authorised to stop the game at any time to review for any act of violence or potential act of violence. The referees must identify the need for the IRS review and the review must take place the first time the referees have stopped the game.

Outcome: Correct decision from the referees. The crew chief was authorised to use the IRS to review the contact created by Yellow 19, which met the criteria to be considered an act of violence and to be penalised with an unsportsmanlike foul for being an excessive, hard contact.

Red 10 personal foul and Yellow 19 personal foul shall be penalised in the order in which they occurred.  As the Red team was in the team foul penalty (their 5th foul in the quarter) Yellow 19 shall be awarded 2 free throws for the personal foul, followed by 2 free throws for Red 10 as a consequence of the unsportsmanlike foul called to Yellow 19. The game will be resumed with a throw in at the throw-in line in Red team’s frontcourt and 14 seconds on the shot clock. 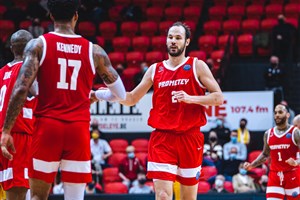 Berke Büyüktuncel: Made in Tofas 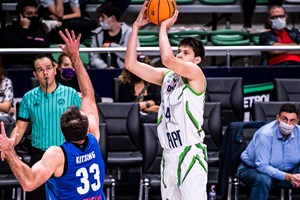