White 32 drives to the basket and makes a lay-up. In his attempt to block the shot, Blue 35 hits the backboard. The referees call a violation and award 2 points to White 32.

Outcome: Correct decision from the referees. Defender Blue 35 made the basket vibrate and so preventing the ball from entering the basket when it still had the ability to do so. White 32 is awarded 2 points.

Green 7 receives the ball in the low post and starts a drive to the basket. A contact occurs and the referee calls an offensive foul on Green 7.

Article 33.11 It is a foul by an offensive player with the ball to:

It is a foul by an offensive or defensive player in the post position to shoulder or hip his opponent out of position or to interfere with his opponent’s freedom of movement by using extended arms, shoulders, hips, legs, or other parts of the body.

Outcome: Correct decision from the referees. Green 7 used his extended arm, outside of his cylinder, and created an illegal contact against his opponent. Offensive foul.

White 18 receives a pass and starts his dribble. Defender, Black 9, extends his arm and a contact occurs. The referee calls a personal foul on Black 9.

Outcome: Correct decision from the referees. Black 9 tried to reach for the ball in a normal basketball play. This is a personal foul. The White team will be awarded a throw-in at the place closest to the infraction and the shot clock will be reset to 14 seconds.

Red 12 receives the ball from a throw-in and starts a dribble. The referee calls a travelling violation.

Article 25.2.1 A player who catches the ball while he is progressing may take two steps in coming to a stop:

Outcome: Correct decision from the referees. Red 12 gained the control of the ball with both feet in the air. Then he touched the floor with his left foot (pivot foot) and then his right foot touched the floor. He lifted his pivot foot before releasing the ball to start his dribble. This is a travelling violation.

After a missed 3-point field goal attempt by Yellow 30, Yellow 42, and Blue 11 fight for the rebound. The referee calls a personal foul on Blue 11. The referee become uncertain if Blue 11’s foul meets the criteria to be considered as an unsportsmanlike foul, so the crew chief decides to use the IRS review. After the review, the personal foul is upgraded to an unsportsmanlike foul.

F.3.3    The following game situations may be reviewed during any time of the game:

Outcome: Correct decision from the referees. The contact created by Blue 11 is not a legitimate attempt to directly play the ball within the spirit and intent of the rules. Yellow 42 shall be awarded 2 free throws and the game shall be resumed with a Yellow Team throw-in from the throw-in line in their front court and 14 seconds on the shot clock. 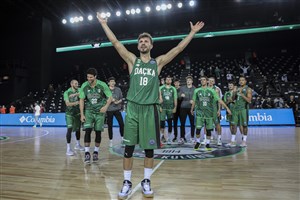 They have Dodo, you don't: Ozdemiroglu is the MVP of January

Round of 16 Group K game of the week: U-BT Cluj Napoca vs. Filou Oostende 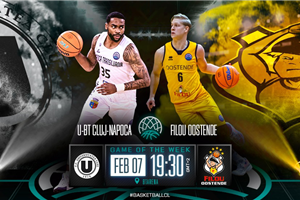