Black 20 receives the ball and a contact occurs. The referee calls a foul not in the act of shooting to Yellow 14 and awards 2 free throws to Black 20 because the Yellow team was in team foul penalty situation.

Article 15.1.2 The act of shooting on a shot begins when the player starts, in the judgement of a referee, to move the ball upwards towards the opponents’ basket.

Outcome: Incorrect decision from the referees. Black 20 pump faked and then he started a new act of shooting moving the ball upwards towards the opponents’ basket when the contact occurred. Black 20 should have been awarded 3 free throws.

Blue 11 drives to the basket and attempts a shot. The referee calls a foul in the act of shooting to White 51 and awards 2 free throws to Blue 11.

Article 33.2 The defensive player must not be penalised for leaving the floor vertically or having his hands and arms extended above him within his own cylinder.

Outcome: Correct decision from the referees. White 51 created an illegal contact by hitting the shooter’s right arm. 2 free throws will be awarded to Blue 11.

White 0 finishes his dribble with a reverse spin move taking the ball in his hands in a continuous movement towards the opponents’ basket when defender Red 32 falls to the court. The referee calls a technical foul to Red 32 for fake being fouled and awards the field goal.

Interpretation: After the free throw by any Team A player for B1’s technical foul, if A1’s shot entered the basket, the field goal shall count. The game shall be resumed with a Team B throw-in from any place behind the endline.

Outcome: Correct decision from the referees. The Red team had received a previous warning for a fake being fouled action. Because of the repetition of a similar action, a technical foul was called correctly. The basket counts and 1 free throw for the technical foul is awarded to any White team player. After the free throw, the Red team shall resume the game with a throw-in behind the endline as after any other field goal. 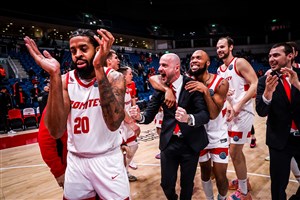 Round of 16 Group I game of the week preview: MHP Riesen Ludwigsburg vs. Galatasaray Nef