Black 4 attempts a field goal. White 20 taps the ball away from the basket and the referee calls a basketball interference and awards 2 points to Black 4.

Outcome: Correct decision from the referees. The ball had some part inside the basket and below the level of the ring, so it is considered to be within the basket. 2 points shall be awarded to Black 4.

Green 1 receives the ball and stops, he then starts a dribble being guarded by Grey 3. Green 35 attempts to screen Grey 3 and the referee calls a team control foul.

Article 25.2.1 A player who catches the ball while he is progressing may take two steps when coming to a stop.

Article 25.2.1 A player who catches the ball while standing with both feet on the floor

Article 33.7 Legal screening is when the player who is screening an opponent:

Outcome: The first part of the play situation, an incorrect decision from the referee. Green 1 committed a travelling violation because he moved his pivot foot before releasing the ball to start the dribble. The second part of the play situation, correct decision from the referee. Green 35 was moving with his arms outside of his cylinder and created an illegal contact when trying to set the screen..

Blue 24 attempts a 3-point field goal while Yellow 6 tries to block the shot. After the ball is released but with Blue 24 still airborne, the referee calls a personal foul to Yellow 6 and awards 3 free throws to Blue 24.

Article 33.16 Fake is any action by a player to simulate that he has been fouled or to make theatrical exaggerated movements in order to create an opinion of being fouled and therefore gaining an advantage

F 3.1 The following game situations may be reviewed at the end of a quarter or overtime:

F 2.2 The initial decision of the referees can be corrected only if the IRS review provides the referees with clear and conclusive visual evidence for the correction.

Outcome: Correct decision from the referees. The IRS provided the referees with clear and conclusive visual evidence that the ball was still in contact with the shooter’s hand when the backboard red lighting flashed.

Yellow 9 passes the ball to his teammate Yellow 15, who then hands-off the ball back to Yellow 9. Afterwards, the referees stop the game when they see Yellow 15 on the floor.

F-4.17 In situations where an act of violence occurs which is not called immediately, referees are authorised to stop the game at any time to review for any act of violence or potential act of violence. The referees must identify the need for the IRS review and the review must take place the first time the referees have stopped the game.

Outcome: Correct decision from the referees, in accordance with the new Official Interpretation. The referees are authorised to use the IRS review to identify a potential act of violence. They stopped the game immediately without putting either team at a disadvantage. After the IRS review, they decided that the contact didn’t meet the criteria to be an act of violence. The game shall be resumed with a Yellow team throw-in from the place nearest to where the game was stopped and the Yellow team shall have the remaining time (14 seconds) on the shot clock (OBRI F-4.18). 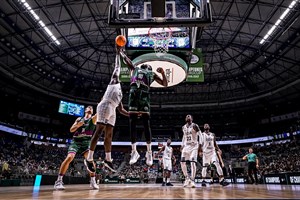 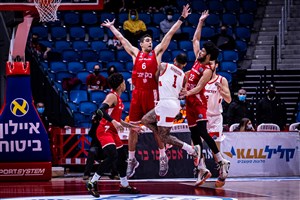