MIES (Switzerland) - Group I is still wide-open heading into the last week, as no team have advanced to the Quarter-Finals from the group, but Galatasaray Nef were eliminated from the competition with their loss to JDA Dijon.

MHP Riesen Ludwigsburg would've qualified to the Quarter-Finals with a win over Hapoel U-NET Holon, but they lost by a score of 71-68, completing Holon's sweep over them in the Round of 16.

The game started slow, as the two teams scored a combined 52 points, which is the second fewest points in the first half of a BCL game this season.

Things picked up more in the second half in a back-and-forth affair and Ludwigsburg grabbed a 66-64 lead with 2:30 left to play in the fourth quarter, but Holon got a three-pointer from Chris Johnson (17 points, 6 rebounds) and a layup by Adam Smith after a turnover to seal their victory.

Holon had five players score in double figures, and as a team, they shot an efficient 50 percent from the field.

"Tough win tonight. We know that Ludwigsburg is a good team," said Johnson. "That's one of the things coach emphasized tonight, keep them off the glass, playing aggressive, boxing out and just matching their intensity, and that showed tonight."

Jonah Radebaugh led Ludwigsburg in the loss with 22 points and 8 rebounds on 8-of-15 shooting from the field.

Despite struggling with their shot (33.8 percent from the field), Ludwigsburg took care of the ball and only committed 4 turnovers, the fewest of any team in a BCL game this season.

"They made big shots when it mattered and we didn't get the stops when it mattered," said Radebaugh. "Gotta move on. We still have another chance to secure our place in the next round, so that's what the focus is now."

Holon (3-2) will host Dijon in the final Round of 16 game, while Ludwigsburg (3-2) will travel to face Galatasaray in their final group play game.

Dijon send Galatasaray home with no chance to advance

Dijon defended their home court and completed the Round of 16 sweep over Galatasaray, 80-69, leaving the Turkish team without a chance to move on to the Quarter-Finals.

The game was tied up at 59 heading into the fourth quarter, but Dijon outscored Galatasaray 21-10 in the final 10 minutes to grab the important 11-point win.

MVP of February David Holston once again led Dijon in scoring with 23 points along with 4 rebounds and 4 assists on 9-of-13 shooting from the field.

Holston has now made 3+ shots from behind the arc in eight games this season in the BCL, tied for the most alongside Lenovo Tenerife's Sasu Salin.

Dijon's Jacques Alingue swiped away six steals from Galatasaray, which is tied for the most in a BCL game this season, while Robin Ducote scored 16 of the team's 31 points from the bench.

"It's never enough winning," said Dijon head coach Nenad Markovic. "That's why we work, that's why we like this sport because every next game is a new challenge, and we always want to win."

Maurice Ndour had a perfect first half for Galatasaray, scoring 18 points on 9-of-9 shooting from the field.

🔒🦁 Ndour is locked in with 18PTS on a perfect 9/9 from the field in the first half! #BasketballCL #RoadToBilbao I @GSBasketbol pic.twitter.com/vinQL81IDF

He finished with a game-high 24 points along with 7 rebounds on 12-of-14 shooting from the field.

"I think it came down to execution," said Ndour. "They started pressing us, they started playing hard and we were not able to get the ball over to the open man."

Dijon (3-2) will travel to face Holon in the final Round of 16 game, while Galatasaray (1-4) will look to finish their Round of 16 off on the right foot and play spoiler when they host Ludwigsburg.

Both games are on Wednesday March 23. 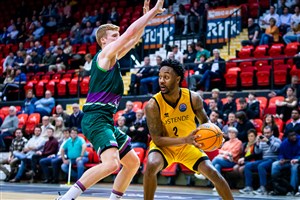 Filou Oostende blow out Unicaja, but Spaniards advance to Quarter-Finals 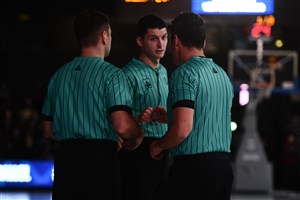