MIES (Switzerland) - With the 2020-21 Basketball Champions League Play-Offs behind us but not far in the rear view mirror and before we turn our attention to the Final 8, it is the perfect time to reflect on the extraordinary performances we had the chance to watch over the past six weeks. For the first time in the history of the competition and due to the format changes that had to be implemented, every player in the Play-Offs had the chance to play six games in the Top 16. There were several candidates, but these five stars either shone a bit brighter than others or were most instrumental in their team's success: C.J. Harris, Kasey Shepherd, Bonzie Colson, Jasiel Rivero and Giorgi Shermadini  have been named on the 2020-21 All-BCL Play-Offs Team.

Nizhny Novgorod went through all kinds of trails and tribulations during the Regular Season, with various players missing weeks of action at the time, so we were kind of expecting them to play much better in the Play-Offs.

Kasey Shepherd personified this jump better than anyone, and the evident improvement in his stats - his scoring average rose to 20.5 points from 15.6 points per game and his three-point shooting improved to an eye-popping 65.5 percent, up from 48.3 percent during the Regular Season - only tells half the story.

The most impressive aspect of the Ninzhy point guard's improvement was in the way he carried himself on the floor and in the way he inspired confidence in his teammates and fear in his opponents as the new leader of the team that started the Play-Offs on a 4-game win streak.

😎 There's a reason why he was #1 in the MVP Race! @cjharris11 goes north of 20 for the 5th time this season, carrying @HapoelHolonBC all the way to the #BasketballCL Final 8! pic.twitter.com/TQECbCir4Y

Both those who regard Hapoel Unet-Credit Holon as the upstarts of the Play-Offs and those who consider their Group I win (over the likes of Happy Casa Brindisi and Tofas Bursa, no less) as predictable, still coincide in that the Israeli team achieved success by staying loyal to their preferred - and particular - style of play.

Holon's brand of five-out offense is not depended on any one star player, but the indisputable director of this ensemble cast is C.J. Harris. His ability to slice and dice the defense and either drive to the basket or kick out to the open shooter is the driving force of that offense.

The 30-year-old guard scored in double digits in each game in the Play-Offs and put up his best display in the deciding clash with Brindisi in gameday 5, where he collected 24 points, 5 assists, 3 rebounds and 2 steals for an efficiency rating of 20.

Bonzie Colson sat out the Week 3 encounter with AEK and SIG Strasbourg suffered a 77-68 defeat, which was their third in a row in the Play-Offs and convinced most onlookers that the French team's bid to reach the Final 8 was as good as over.

Luckily for Strasbourg fans, Colson and his teammates thought otherwise and they went on to win the next three games and clinch qualification in a win-or-go-home clash with Turk Telekom in Week 6.

Colson averaged 19.3 points, 5.3 rebounds and an efficiency rating of 18.3 per game over the three-win streak, but perhaps the most telling measure of his contribution was his plus/minus rating in those crucial games, as Strasbourg outscored their opponents by 18 points, on average, with the 25-year-old small forward on the floor.

It's difficult to single out a single star on Hereda San Pablo Burgos because, well, they are the reigning BCL champions and they have a roster laden with excellent players, but also because a different player might step up in each game, depending on the opponent, the pace of the game, or simply their state of form.

No matter what the circumstances though, you can always count on Jasiel Rivero to do two things: First, to be a constant headache for defenses because he can stretch the floor if you choose to defend him with a big center or overpower you down low if you guard him with a power forward. Second, to be dominant on the glass, on both ends on the floor, and no matter how good a rebounder is his opponent.

The most memorable performance of the 27-year-old Cuban in the Play-Offs was certainly the stressful 76-75 win over VEF Riga in the group opener, where he had to come up with a double-double of 25 points and 11 rebounds for Burgos to survive a huge scare and eventually prevail in overtime.

🤔 MVP of the season? Could be! @gioshermadini needed less than 20MIN to put up 14PTS & 7REB as @CB1939Canarias blew out Hereda San Pablo Burgos! #BasketballCL pic.twitter.com/ogP4TsUgwX

Just as you can count on Lenovo Tenerife to make the Quarter-Finals of the BCL, you can count on Giorgi Shermadini to be one of the top players in the competition. The Georgian center only joined the islanders and debuted in the BCL in 2019, but he has already become something like the golden standard against which every other center in the league will inevitably be measured.

This season, as coach Txus Vidorreta seeks to manage the playing time of his star veterans with an eye to the business end of the season, the 32-year-old Shermadini averaged only 22 minutes per game in the Play-Offs, but this time was more than enough for him to make a huge impact.

The Georgian center put up one 'microwave' display after the other as he scored almost 0.82 point per minute and shot 87 percent (27 of 31) from the free-throw line. In the Week 3 game against VEF Riga, he needed just 23 minutes and 11 seconds on the floor to register 25 points, 9 rebounds, 3 assists, 1 steal and an efficiency rating of 31. 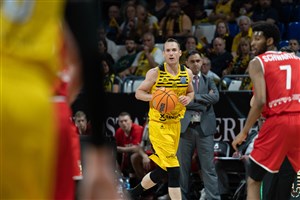 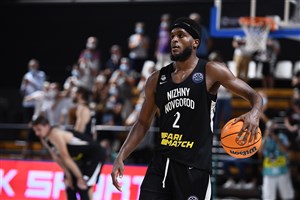