Green 31 attempts a 3 point jump shot. While airborne, defender Yellow 11 jumps forward and creates a contact on the shooter’s leg by invading his cylinder. The referee decides that the shooter faked being fouled and calls a technical foul to him.

White 22 receives the ball near the basket and jumps for a field goal attempt. Black 24 jumps and blocks the shot.  The referees decide that there is no illegal contact and let the play continue.

The Article 33.2 states that the defensive player must not be penalized for leaving the floor vertically (within his cylinder) or having his hands and arms extended above him within his own cylinder.

Therefore, the defensive movement upwards within his cylinder by Black 24 is legal as long as he doesn’t create any contact against the opponent with his arms/hands outside his cylinder in his attempt to block the shot.

Outcome: Correct decision from the referees. Black 24 didn’t create any illegal contact in blocking the shot.

Yellow 22 attempts his last free throw. The ball bounces on the rim and is tapped away by Green 9. The referee calls a basketball interference during the last free throw.

The Article 31.2.4 states that an interference occurs when a defensive player touches the ball or the basket while the ball is within the basket, thus preventing the ball from passing through the basket.

Yellow team is in control of the ball in their frontcourt. Defender Black 1 taps the ball and at the same time pushes Yellow 18 before starting a dribble. The referee calls a personal foul to Black 1 when the shot clock shows 13 seconds and the shot clock is reset to 24 seconds.

After the IRS review, the referees award a throw-in to the Yellow team from their backcourt with 24 seconds on the shot clock.

The Article 14.1.3 states that the team control ends when an opponent gains control of the ball.

And the Article 14.1.1 states that the team control starts when a player of that team is in control of a live ball by holding or dribbling it or has a live ball at his disposal.

Therefore, Yellow team were still in control of the ball when the foul was called.

The Article 29.2.1 states that the shot clock shall be reset whenever the game is stopped by an official for a foul by the team not in control the ball. In this situation, the possession of the ball shall be awarded to the same team that previously had the control of the ball. If the throw-in is administered in that team’s:

Outcome: Incorrect decision from the referees. A throw in should have been awarded to Yellow team from the place nearest to the infraction in their frontcourt and with 14 seconds in the shot clock as the shot clock showed less than 14 seconds when the personal foul was called.

The Article 33.4 states that, when guarding a player who control the ball, the elements of time and distance do not apply.

Outcome: Correct decision from the referees. Defender Yellow 25 fulfilled the first 3 conditions but not the last one, as the point of contact was his shoulder, not his torso. Blocking foul. 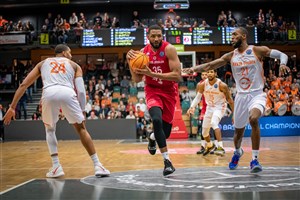 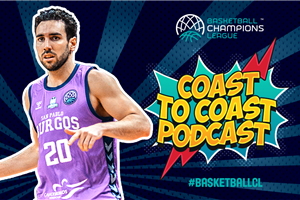