MIES (Switzerland) - Tuesday featured no less than six road wins while Wednesday saw some high-octane offensive displays by home teams so the Team of the Week reflects, to an extent, the remarkable individual performances that brought about such results. 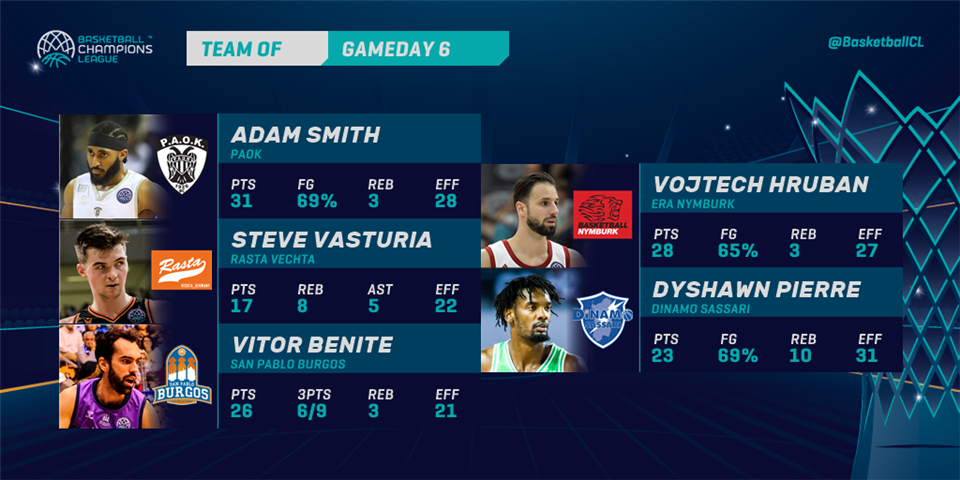 The five players who make up Team of the Week for Gameday 6 in the 2019-20 Basketball Champions League Regular Season are Adam Smith of PAOK, Vitor Benite of San Pablo Burgos, Steve Vasturia of RASTA Vechta, Vojtech Hruban of ERA Nymburk and Dyshawn Pierre of Dinamo Sassari

Let's have a closer look at each one's exploits on Gameday 6:

The PAOK point guard got the hot hand early on Wednesday night, scoring 13 first-half points in his team's clash with Casademont Zaragoza to pace the Greek side to a much-needed 93-78 success at home.

Smith finished with 31 points on 11 of 16 shooting from the floor and three rebounds, registering a season-high efficiency rating of 28. The 27-year-old American is the only the second player to score at least 27 points in consecutive games this season.

He is something of a barometer of PAOK this season and his recent performances mirror his team's resurgence, following a 0-4 start to the season. He has shot 21 of 36 from the floor in the past two games, after going 19 of 63 in his first four appearances.

Smith of course is no stranger to huge performances in the BCL, as he  had registered a career-high efficiency rating of 31 on Gameday 2 in the 2017-18 season and was named MVP of the week. On that occasion, he had 25 points, 8 rebounds and 7 assists to help his then team Elan Chalon to a win over Capo d'Orlando.

BCL fans have been expecting the Brazilian international to deliver a performance worthy of his well-earned reputation as a sharp-shooter and Benite duly obliged at a crucial junction  of the season for his team, who were on a three-game losing skid.

On Wednesday, the San Pablo Burgos shooting guard came off the bench and caught fire in the fourth quarter, pouring in 17 of his game-high 27 points in that final stretch to seal his team's 91-84 win over Hapoel Bank Yahav Jerusalem.

Benite shot 9 of 16 from the floor, including 6 of 9 from three-point range, and added 3 boards and 2 assists for an efficiency rating of 21 in just 23 minutes of play.

This was a BCL career-high for the Brazilian, whose previous scoring record in the competition were the 22 points he had against Monaco in the 2017-18 season, when he was playing for UCAM Murcia. Benite is shooting 44 percent from beyond the arc this season, while in 2017-18 he averaged 37 percent from downtown.

Vasturia is the only player on this Team of the Week who  is currently experiencing his debut BCL season and he went about earning his spot in a different way to the other two guards here.

The RASTA Vechta guard was a commanding presence on the court of the Athens Olympic Hall on Tuesday and orchestrated his team's 79-75 win at AEK by delivering an all-round performance.

The 24-year-old American scored 17 points, brought down with a season-high 8 rebounds, dished out 5 assists and also came up with one steal to register an efficiency rating of 22.

Vasturia, who had reached the same efficiency rating in the opening week of the season, is now averaging 16.8 as the highest-rated Vechta player after the first six games.

The Czech international has been a linchpin of ERA Nymburk since 2012 and  has played  in the BCL since the inaugural week of the competition in 2016, but this is the first time he earns a spot on Team of the Week and it comes only two weeks after another milestone, as he climbed to second-leading scorer in the storied club's history.

On Wendesday, Hruban poured in 13 points in the opening quarter to lift Nymburk to an early double-digit lead over Mornar Bar, and he went on to finish with 28 points on 11 of 17 shooting from the field as the Czech champions prevailed 91-74.

The 30-year-old small forward who is known across Europe as an excellent shooter willing to do all the small things for his team, also added 3 boards, 2 assists and 2 blocks for a performance rated at 27 in terms of efficiency.

This was Hruban's second-best performance in the BCL and his best since the 2016-17 Regular Season when he had also scored 28 points but on an efficiency rating of 33 in a win against Bakken Bears. He is on track for his best BCL season from the foul line, as he is currently averaging 92 percent free-throw shooting.

If you get a sense of déjà vu upon hearing that Dinamo Sassari came from behind to win almost at the death propelled by a Dyshawn Pierre double-double, don't worry, it really has all happened before.

On Tuesday night, the Canadian forward had 23 points and 10 rebounds, also adding 2 assists, 1 steal and 1 block for an efficiency rating of 31, to inspire the Italian team's 94-92 win at UNET Holon, after they had trailed by 15 points.

In the opening week, Pierre had 24 points and 12 boards to lift Sassari to a 79-78 last-gasp win over Lietkabelis, when he also hit the game-winning free-throws. He registered an efficiency rating of 35 in that game and not only made the Team of the Week, but was also named Gameday 1 MVP:

Pierre is the only player so far this season to have collected at least 20 points and 10 rebounds in more than one game. He is also joining a very select club as he has now made the Team of the Week for the third time in his BCL career, the first being Gameday 8 of the 2017-18 Regular Season. 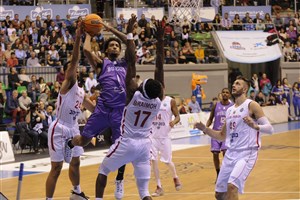 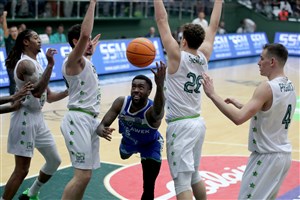