MIES (Switzerland) - Seven teams will look back at Gameday 13 as a milestone in their Regular Season campaign as this was the week they secured a place in the Play-Offs, behind some excellent collective and individual performances.

Team of the Week includes four players who led their respective teams to victories that booked them a trip to the postseason, and a player who paved the way for his team to clinch first place in Group B. Just an inch away from #BasketballCL Round of 16! Teksut Bandirma silence the packed stands in Poland, three straight wins send them to 7-6.

Bandirma have relied all season long on Kalinoski to provide reliable long-range shooting and on Tuesday night, in a must-win game in Poland, he knocked down a season-high five triples on nine attempts.

The 27-year-old guard finished with 19 points, 6 assists, 5 rebounds and 2 steals to help Bandirma prevail 89-84 over Anwil Wloclawek, a win that ultimately meant the Turkish side secured the Play-Offs once the rest of the results in the group came in.

Kalinoski registered a joint season-high efficiency rating of 22 and earns a place on Team of the Week for the first time in his BCL career. He is the fourth Bandirma player to earn the distinction this season, following in the footsteps on Jaime Smith, Emanuel Terry and Sehmus Hazer.

The 26-year-old guard stepped up for Besiktas in recent weeks following the roster changes on the Turkish team, so it was almost expected that he would come up with a big display  in their crucial game against Neptunas on Tuesday.

Gotcher however surpassed expectations as he tirelessly stayed on the floor for more than 38 minutes - and even came up with his first dunk in a long time! The Besiktas guard registered a season-high efficiency rating of 27 as he posted a double-double of 19 points and 12 rebounds and added 3 steals and 1 block to lead Besiktas to a 76-69 victory over the Lithuanian team.

The all-round guard earns a spot on Team of the Week for the first time in his BCL career, becoming the first Besiktas player to make it this season.

Telekom Baskets Bonn, welcome to the #BasketballCL Play-Offs! Defense paved the way against JDA Dijon, French side scored just 30 points after the break.

Sometimes a very thin line can separate arriving in the final week of the Regular Season to fight for first place in the group with getting there fearing that you might miss out on the Play-Offs, but Bonn won't have to walk that line, thanks in great part to Bartolo delivering his best game of the season on Tuesday night.

The veteran winger came up with a season-high 22 points on an outstanding 9 of 11 shooting from the floor, added 7 rebounds, 1 assist and 1 steal. He registered a BCL career-high efficiency rating of 27 and paved the way for Bonn's 83-72 win over JDA Dijon which means the German team will go into Gameday 14 to battle it out for top spot in Group D.

Bartolo claims a Team of the Week spot for the first time in the three seasons he has competed in the BCL with Bonn and also becomes the first player of the German team to earn the distinction since Bojan Subotic, on Gameday 9 of the 2018-19 season.

AEK are moving to the #BasketballCL Play-Offs again! The Queen was dominant in Germany, and this win also pulls Bandirma to Round of 16.

AEK had to travel to Germany on Wednesday night without their sidelined-through-injury leading scorer Keith Langford to face RASTA Vechta in a crucial clash for both sides. While the Greek team showed steely defense almost from tip-off, the big question was where the points would come from.

To answer that question, Jankovic poured in 8 quickfire points and added 1 steal and 1 assist in the first five minutes to propel AEK to a 16-5 lead almost in the blink of an eye.

The former Greek international, who struggled with an injury almost immediately after joining AEK in October, finished with a season-high 14 points, 3 assists, 2 rebounds, 2 steals and 1 block and registered a season-high efficiency rating of 17 to make Team of the Week for the first time in his career.

When, in early January, Thomas went 10 of 10 from the floor and posted an efficiency rating of 32 to earn Gameday 10 MVP honors, it was difficult to imagine he could top that performance.

The versatile Hapoel Jerusalem power forward however proved on Wednesday night that, in addition to being able to do everything on a basketball court, he also has plenty of imagination as he stuffed the stat sheet to propel his team to a hard-earned 96-91 win over Burgos and consequently first place in Group B.

Thomas registered a career-high efficiency rating of 38 as he collected 27 points on 11 of 14 shooting, 6 rebounds, 4 assists, 4 blocks and 1 steal. The 26-year-old forward is making his third appearance on Team of the Week this season, with the first coming on Gameday 8 and the second of course on Gameday 10. 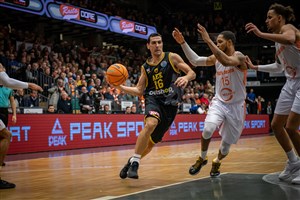 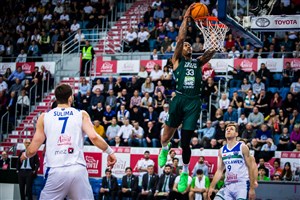