MIES (Switzerland) - The most eventful week of the Regular Season so far provided us with enough spectacular plays to fill hours of highlight reel, featured some surprising results, and saw three teams secure a place in the Play-Offs.

The Team of the Week includes four players who powered their respective teams to big road victories, and one player who inspired a home win over a direct rival in the play-off race. Hapoel became on Wednesday night the first team in competition history to have four players scoring 20 or more points in the same game, and they sure needed a whole lot of points to overcome Anwil Wloclawek on the road, 107-102.

Brown, who earns a spot on Team of the Week for the third time in his BCL career, hit the go-ahead triple 46 seconds from the final buzzer and then, with ice running through his veins, made two free-throws with 18 seconds left on the clock to seal the win for his team.

The Hapoel guard came off the bench and racked up with a double-double of 21 points and 10 assists, also adding 6 rebounds for good measure, to register a season-high efficiency rating of 31. He is the fourth Jerusalem player to earn Team of the Week honors in the 2019-20 season.

Sing it with me: Hazer better stronger faster! @sehmus_hazer puts up another electric performance for @bandirmabk, scoring 17 of his 23 points in the second half!! 🔥🔥 #BasketballCL

In order to beat a top team on the road you surely need experienced players with a proven track record of not yielding under pressure, correct? Wrong, Sehmus Hazer stated valiantly on Tuesday in Athens, and proceeded to prove his thesis.

Bandirma's 20-year-old shooting guard seemed unstoppable at the OAKA Olympic Hall as he poured in a season-high 23 points on 9 of 12 shooting from the floor, adding 6 assists and 6 rebounds to fuel his team's big 96-84 victory over AEK.

Hazer collected a BCL career-high efficiency rating of 33 and not only earns a place on Team of the Week for the first time in his career, but has also become the youngest player to achieve this feat in the 2019-20 season. The youngster is the third Bandirma player this season to earn the distinction, following in the footsteps of veterans Jaime Smith and Emanuel Terry.

📺 @JDADijonBasket become the first team to secure a berth in the Play-Offs from the hotly-contested Group D after their W in Thessaloniki! #BasketballCL

There are various reasons why Dijon are an excellent team but a very important one is undoubtedly the multi-faceted contribution of Lamonte Ulmer, who flipped a switch on Gameday 7 - when he earned his first appearance on Team of the Week - and has never looked back.

On Wednesday, the veteran winger posted his first double-double of the season, of 15 points and 11 rebounds, and also added 2 assists and 1 steal to steer Dijon to a hard-fought 84-77 win over PAOK in Thessaloniki.

Ulmer registered an efficiency rating of 26 and his excellent performance was instrumental in the French team's road victory which ultimately led to Dijon clinching a Play-Offs spot ahead of anyone else in Group D. He is one of three Dijon players this season to earn a spot on Team of the Week but the only one so far to have made it twice. T.J. Cline came up Tuesday with his first double-double of the season

Holon's well-oiled offense was back at its best on Tuesday but their vital 101-94 win over SIG Strasbourg would most likely not have materialized if the Israeli team didn't control the battle on the glass.

Cline, a key presence inside for Holon on the night, brought down a season-high 10 boards to go with his 18 points and 2 assists, as the hosts out-rebounded their French visitors 37 to 28.

The 25-year-old forward's performance is rated at 20 in terms of efficiency and has earned him a first-ever appearance on Team of the Week in his BCL career. He is the second Holon player to win the distinction this season after Latavious Williams, who later parted ways with the team.

Nymburk were a team on a mission on Tuesday as they took on high-flying Iberostar Tenerife and they executed their plan to perfection in order to top 89-84 the team which had the competition's best record coming into the game and secure a berth in the Play-Offs ahead of schedule.

Hankins anchored the Czech champions' excellent defense which held MVP candidate Giorgi Shermadini to just 8 points and scored a season-high 18 points of his own on the other end.

The 23-year-old American center also collected 7 rebounds, 1 block and 1 steal for an efficiency rating of 19. Hankins, who is leading the league in blocks with 2.4 per game, makes his first ever appearance on Team of the Week and is the second Nymburk player to earn the honor, after Vojtech Hruban on Gameday 6. 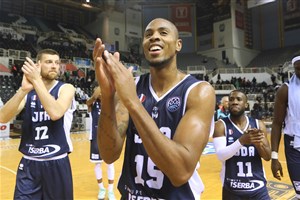 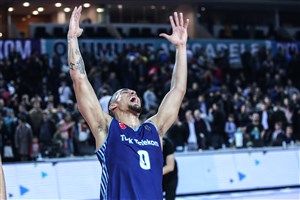