MIES (Switzerland) - The opening week of action in 2020 featured some eye-catching results as several teams in the lower half of the standings came up with big victories over higher-positioned rivals.

The first Team of the Week of the new calendar year therefore reflects to a great extent the individual performances that led to such results.

Adam Smith of PAOK, Rasheed Sulaimon of JDA Dijon, MiKyle McIntosh of Filou Oostende, TaShawn Thomas of Hapoel Bank Yahav Jerusalem and Ousmane Drame of EB Pau-Lacq-Orthez make up Team of the Week for Gameday 10 in the 2019-20 Basketball Champions League. 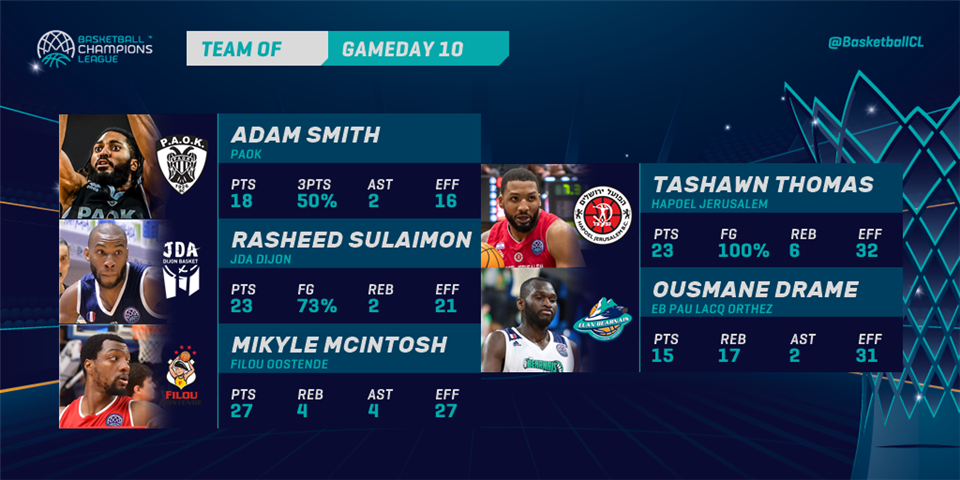 The PAOK guard is no stranger to Team of the Week, in fact he was named Gameday 6 MVP and has long established himself as the Greek team's leading scorer and a player who regularly stays on the court of over 30 minutes. On Tuesday in Lithuania though, he managed to make a big impact in a different way, as he came off the bench and played only 19 minutes, for the first time this season.

Smith poured in 8 quick-fire points in the final two minutes of the opening quarter to lift PAOK over Neptunas Klaipeda at the end of the frame and boost the black-and-whites' belief that they could escape with a win against a team that had routed them in the reverse fixture in Thessaloniki.

The 27-year-old guard finished with 18 points, 2 assists, 1 rebound and 1 steal for an efficiency rating of 16 as PAOK prevailed 86-80 and rose to 4-6 in the standings of Group D, which now seems almost destined to generate gripping drama up until the final day.

That's how you take the lead in the group! @jdadijonbasket took down Happy Casa Brindisi in Italy, becoming the first road team to win in Brindisi this season! 💪 #BasketballCL

Dijon are having an exemplary campaign in Group D, setting the pace in the most jam-packed race of this Regular Season, but on Wednesday they were facing the daunting task of visiting the impregnable fortress of Happy Casa Brindisi.

Luckily for the French team, Sulaimon knew the best way to blow down this fortress was to shoot at it from long range. The 25-year-old Nigerian guard went 4 of 5 from beyond the arc to lead Dijon's outstanding three-point shooting night and ultimately pave the way for their win in Italy.

Sulaimon finished with 23 points on 8 of 11 from the floor, 2 boards, 1 assist and 1 block to register an efficiency rating of 21 as Dijon emerged victorious 93-88 over the previously unbeaten at home Brindisi. This is his first appearance on Team of the Week and he is the third Dijon player to achieve the distinction this season.

Oostende had to deliver an almost flawless performance in order to beat a team like Dinamo Sassari, who arrived in town on Tuesday as the solitary Group A leader, and McIntosh led by example as he came off the bench and registered his best display of the season.

The 25-year-old Oostende forward shot 4 of 6 from downtown as he collected a season-high 27 points and added 4 rebounds and 4 assists to round off a showing of a season-high 27 in terms of efficiency.

The Canadian is named on Team of the Week for the first in his career, in what is his maiden season in Europe and only his sixth appearance in the BCL. He is the third Oostende player to achieve this feat in the history of the competition, after Dusan Djordjevic and Jeam Salumu in the 2017-18 season.

Even those who dismiss stats as a reliable measure of a player's performance are left with no argument against the stat line of Thomas in Hapoel Jerusalem's 83-74 win at RASTA Vechta on Tuesday night.

The Hapoel forward became only the fourth player in competition history to shoot 100 percent from the field on a double-digit number of attempts, as he went 9 of 9 from two-point range and 1 of 1 from behind the arc, en route to his season-high 23 points.

Thomas added 6 rebounds, 2 assists and 2 blocks for a season-high efficiency rating of 32 and he earns a spot on Team of the Week for the second time in this campaign and the third time in his BCL career.

Players not named Ousmane Drame brought down a combined 20 offensive boards in Pau-Lacq-Orthez's 85-76 win over Anwil Wloclawek on Tuesday - meanwhile the only player by that name collected 11 offensive rebounds all by himself.

The Pau power forward, in only his second game in the competition, tied the record for most offensive boards in a single BCL game that Varese’s Oderah Anosike had set in November 2016. He also added 6 defensive rebounds for good measure, to go with his 15 points and 3 blocks.

Drame, whom Pau brought on in December to help out in their injury-plagued frontcourt, registered an efficiency rating of 31 and becomes the second player of the French team to earn a spot on Team of the Week this season. The first one was Gameday 4 MVP Nicolas De Jong, whose season-ending injury prompted Pau to sign Drame. 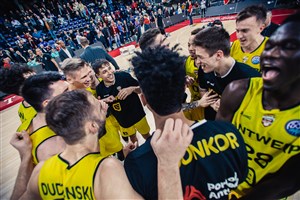 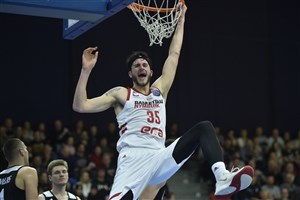