NIZHNY NOVGOROD (Russia) - At a time when the majority of the European population is under lockdown and day-to-day concerns magnify, Nizhny Novgorod head coach Zoran Lukic doesn't lose sight of the bigger picture.

"When this situation is over, we will deal with the consequences. Maybe our societies and our personalities will change so that we take the future of sport, of the economy, of the environment, of everything in a different direction," the 48-year-old Serbian tactician told championsleague.basketball while self-isolating at home.

For me, Nizhny is home. I am on the same page with management, I have the full support of Sergei Panov who, as a former player, understands how this works - Zoran Lukic

Lukic is used to contemplating the future even whilst the scenery around remains the same. He belongs to a very, very rare breed of coaches - the ones who have spent the largest part of their professional career at the same club but reinvent their team almost every season.

He first took the reins of Nizhny Novgorod in 2008, when they were playing in Russia's second division. He stayed at the helm for six years, guiding the club to the top flight and even to the VTB United League play-off finals, left in 2014 and returned to the club for a second spell in 2017.

"Russian basketball legend Sergei Panov and [Sydney 2000 gold medalist] Dmitri Svatkovskiy, who had just taken over the management of Nizhny Novgorod, approached me and explained that they wanted to organize the club on a new basis, to implement a new philosophy where domestic players would get more chances to play and to develop," Lukic recalled.

"So, they made going to Nizhny an easy decision for me, because I loved the idea of helping rebuild a club on a new philosophy. At that time you needed to have two Russian players on the court and for our team that was very simple, we had a maximum of three foreign players and the rest of the team were young guys or the players who earned promotion from the second division.

I am convinced that players can develop at any age, even in their 30s, as long as they are not satisfied with a good game, a good season or even a good decade - Zoran Lukic

"In basketball it is very important to be talented but it is equally important to work hard and develop, and that was the kind of chance we gave to our Russian guys."

The Serbian playcaller is one of the most animated coaches on the sideline during the course a game, but fans don't get to see how much importance he places on building a personal relationship with his players.

"What I've tried to do from the beginning was to push the right button so that players would understand what it is we're trying to achieve and believe in it," he said.

"To me, this is the key to our relationship and it's not easy to work well if the players don't believe their coach or don't trust their coach. My players understand that if they are ready to put in the work, they will get a chance from the club and from myself as the head coach.

"I am convinced that players can develop at any age, even in their 30s, as long as they are not satisfied with a good game, a good season or even a good decade.

The worse thing would be to try to tell the players 'listen guys, it's going to be ok' because they are people with families to think about first, and players second - Zoran Lukic

"But of course, I can do all that because I am very lucky. For me, Nizhny is home. I am on the same page with management, I have the full support of Sergei Panov who, as a former player, understands how this works.

"He knows that the results of your work can take a couple of months to show and he is prepared to wait because we are going in the same direction. If you are a coach that doesn't have this kind of support, it's very difficult to work on a development strategy for a club."

Even for teams who have managed to build a great rapport between coaching staff and players however, the coronavirus outbreak came as a shock. When the Basketball Champions League was suspended, Nizhny had just tied at 1-1 their Round of 16 series with JDA Dijon and were preparing to travel to France for the decisive third game of the series.

"At first players were confused, then they grew uncomfortable, because it is not easy to think about basketball in these circumstances. First the competition stopped, then they shut down the facilities, so it was impossible to work as a team," Lukic explained.

The one thing I cannot compromise on is defense, because defense is about character and it's the cornerstone of everything in the game, of winning games and winning championships - Zoran Lukic

"As a coach, the most important thing I could do was to be straight with my players, to listen to them and to understand them. The worse thing would be to try to tell them something like 'listen guys, it's going to be ok' because they are people with families to think about first, and players second.

"For our club it was an easy decision to stop and of course if the competition restarts, we will call our players back. Getting back into game rhythm will not be only my problem, every basketball team and every athlete in the world will have the same problem.

"There is no way to avoid the consequences of this situation. Preparing to play is a puzzle and it won't be easy, no matter how well each player has kept training by himself at home. First and foremost we will have to be smart to avoid our players getting injured after such a long period without practice."

Up until basketball around Europe came to a standstill however, Nizhny were once again managing to compete on two fronts, combining their VTB league campaign with a deep run in the BCL, despite having to earn a place in the competition from Qualification Round 2.

Some people would not have heard of Nizhny Novgorod if it weren't for the basketball club playing in these competitions. This is what I am proud of - Zoran Lukic

The Russian side, who reached the BCL Quarter-Finals last year, makes a huge effort every season to participate in European competitions and although this is taxing because of the long travel involved, Lukic would not have it any other way.

"First of all, when you are looking to sign a player it's always more attractive for him if, in addition to the VTB league, the club is also playing in a European competition," Lukic explained.

"Second, every club wants to show itself on a big stage and by playing in both the VTB league and a European competition every year it helps everybody to have another goal for the season.

"Of course it's not easy for us, because we have too many games and we don't have a very long roster, but it's the job of the coaching staff to be ready to adapt to the situation every week, to make sure the players recover, to scout the opponents, to prepare the games.

"For players who come to Russia for the first time and they don't know you can travel by plane for five hours and still be inside the country, you need to explain to them what they need to do to recover and to prepare. Ultimately, it's all about good organization and we have that."

While Lukic is a constant at the club, Nizhny's roster changes quite often, for reasons beyond their control. Part of the challenge is to keep finding the pieces that will thrive in the club' system.

"When a development program works well it is also cursed, in a way, because players improve and get very good offers from clubs like Unics Kazan, or CSKA Moscow or Lokomotiv Kuban," Lukic said with a laugh.

"This has been our biggest problem and we can't fight against that, we can't retain those guys. Players also have to follow what it is best for their future and their career. We are not a big club and we always have to keep finding the next talented guys to replace the ones they left.

"I have my style of play, it starts with good, aggressive defense from which we try to create transition plays and play fast. But it's not always easy to play that way and, for sure sometimes you have to adjust.

"But the one thing I cannot compromise on is defense, because defense is about character and it's the cornerstone of everything in the game, of winning games and winning championships. It's not my philosophy to try to score one point more [that the opponent]."

For a person who is so used to always look forward, it is very difficult to look back and evaluate their achievements in all these years of spearheading a project, and Lukic is not an exception.

"The main goal of the club is development, but it's also had some great results, it reached the play-off finals of the VTB league, it played in the Euroleague, now it plays in the BCL," he said.

"It's not easy to compete against clubs like CSKA or Khimki, but the club's philosophy has always stayed the same and it has helped, even a little bit, to put the city on the European map.

"The BCL was better this year, the level of competition was higher, in my opinion both teams and players developed from last season.

"But for me, the most important aspect of the BCL is that you qualify to play in this league based on your results. In sport, both clubs and national teams should play in a competition only if they have earned their qualification on the field." 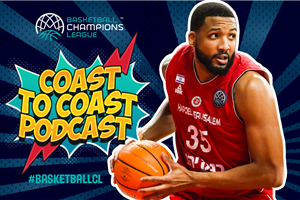