MIES (Switzerland) - Did you know what record Marcelinho Huertas tied this week, why Lietkabelis are the best from the free-throw line or that AEK have never experienced a three-game losing streak before?

Marcelinho Huertas tied the BCL all-time high for most assists in a single game on Wednesday, after dishing 17 in Iberostar Tenerife's 88-65 win at Gaziantep. Tenerife's Brazilian playmaker pulled even with SIG Strasbourg's Scottie Reynolds who collected 17 assists back in the competition's maiden season, when he was playing for Cibona Zagreb. Reynolds set the record in a Regular Season game against Mornar Bar in January 2017.

Huertas leads the league in assists, with 8.9 per game, however against Gaziantep he fell one point short of 10 and therefore nearly missed out on his third double-double of the season. So Chris Wright stands a good chance of beating Marcelinho for most double-doubles in points and assists this season, despite the fact Polski Cukier Torun's campaign will only last for two more games.

Wright posted his fourth such double-double on Tuesday as collected 21 points and 12 assists in Torun's 85-81 loss to Lietkabelis. The Polish team's point guard became in the process the first player in BCL history to finish a game with at least 20 points, 10 assists and no fouls.

📺 @SanPabloBurgos raced to a 23-point lead in the second frame and turned back a late AEK charge to celebrate a big 93-76 win over the 2018 #BasketballCL champions!

San Pablo Burgos delivered one of the best displays of their brief European history on Wednesday night to beat AEK 93-76, on a night that saw the Greek team's skid extend to three games.

AEK are going through a losing streak so long for the first time in the BCL, while the 17-point loss is the largest defeat the 2018 BCL champions have ever suffered in their four-year history in the competition.

What's more, this is also the first time that AEK have given up 90 or more points in consecutive games, as they had lost 96-84 to Bandirma on Gameday 11. It is indicative that AEK gave up 54 points in first half against San Pablo Burgos, the most the Greek side has ever conceded in the first 20 minutes of a BCL game.

There were some green shoots for the Athens yellow-blacks on Wednesday as Nikos Zisis showed he will require precisely zero amount of time to acclimatize to the surroundings he left almost 15 years ago - in his return to AEK the veteran point guard scored a team-high 16 points, more than in any of his 17 appearances in the competition with Brose Bamberg.

AEK were not the only team to suffer a historically large defeat this week. JDA Dijon's 105-73 loss at home to Casademont Zaragoza represents the heaviest defeat a French team has ever suffered in a BCL game. SIG Strasbourg had previously a 24-point loss to BAXI Manresa on Gameday 10.

Brose Bamberg's 38-point winning margin in their 91-53 rout of VEF Riga on Tuesday is the widest point differential this season. It is also the largest win for Brose Bamberg in their BCL history, and only the second time they win a game by a margin greater than 10 points. The first was the reverse fixture against VEF, on Gameday 5, which the German team won 76-55.

Meanwhile Filou Oostende's 85-67 loss to Turk Telekom on Wednesday is the Belgian team's second-heaviest defeat at home in the competition and only the second time they lose by more than 15 points at home. Oostende's largest BCL defeat at home remains a28-point loss they suffered to Besiktas Sompo Sigorta in October 2017.

Lietkabelis absolutely needed to beat Torun on Tuesday in order to stay in the play-off race, and they started from the basics. The Lithuanian team sunk all 17 of their shots from the foul line, setting a new competition record for most made free-throws without a miss in a single game.

By contrast, VEF Riga converted only one of the four free-throws they attempted in their 91-53 loss at Bamberg. This is a joint season-low from the stripe, and what is extraordinary is that the only other team to have made a single free-throw won the game in question - it was JDA Dijon in their 84-77 win at PAOK on Gameday 11.

EB Pau-Lacq-Orthez's Justin Dentmon had 27 points in his team's Wednesday loss at Hapoel Bank Yahav Jerusalem, and he has now become the first player this season to score 20 or more points in seven games. Dentmon's achievement is even more impressive considering that he has played in eight games altogether, since he joined Pau after the start of the season.

Josh Young of RASTA Vechta became on Tuesday the first player in BCL history to collect more than 20 points, 5 assists and 3 steals off the bench, as he finished with 23 points, 7 assists, and 4 steals in his team's 82-70 loss at Bandirma. 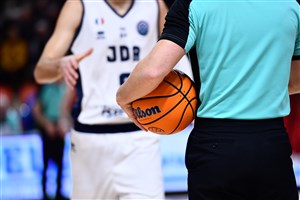