ATHENS (Greece) - For the third time in four seasons of the Basketball Champions League, a team from Spain made it to the title game. Hereda San Pablo Burgos will play their first ever international final, after an 81-67 win over JDA Dijon.

The previous two times a club from Liga Endesa made it to the Final, it was Iberostar Tenerife, in 2017 and 2019. Burgos could be in for a rendezvous with the hosts AEK, or it could be an all-Spanish affair if Casademont Zaragoza advance from the other side of the draw.

Turning point: Coach Joan Penarroya's men climbed to a double digit lead early in the game, but JDA Dijon proved to be a stubborn opponent, not willing to go away. However, with eight straight points, two triples and a step-back two, Vitor Benite sent the game from 63-55 to 71-57, putting the game out of Dijon's reach with five minutes to play.

Stats don't lie: A big reason why David Holston is not starting for Dijon is the fact that he has the firepower to lead the second unit in scoring. But Holston struggled with Burgos' physicality, unable to get hot against Alex Renfroe, Thad McFadden and Omar Cook. With Holston cold, Burgos had a 35-11 edge in bench points, more than enough to cruise to the Final.

Game heroes: The captain! Vitor Benite started the game hot, picking up 10 points on four field goals in the first quarter, and came back for the finishing touches with the aforementioned 8-point torment in the fourth. The Brazilian finished with 25 points on 10-of-16 shooting from the field, even though did not take a single free throw in this one. Ken Horton was impressive off the bench, 19 points and 10 rebounds for the big man out of New York. Unsung hero in the middle - Dejan Kravic (11pts, 6ast, 5reb, 2blk).

Bottom line: Burgos are making their international debut season one to remember, but the job is still not done as they have a chance to pick up a trophy on Sunday. They already played the Semi-Finals of the Spanish League in 2019-20, rewriting their own record books. Dijon will not win another trophy in 2019-20, but they are still the 2020 French Leaders Cup winners and the team that made a lot of noise in the Basketball Champions League. They will play for third on Sunday. 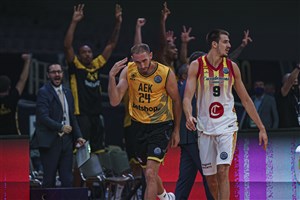