MIES (Switzerland) - The Official Draw Ceremony for the 2020-21 season of the Basketball Champions League took place on Wednesday in Mies, Switzerland. The Regular Season consists of four (4) groups of eight (8) teams each, with games played on a home and away basis and in a round robin format. The four (4) best ranked teams from each group will advance to the Play-Offs. The action will tip off on 13 October. Games will be played home and away on 15 and 18 September. The teams indicated in second position will play the second leg at home.

Games will be played home and away on 22 and 25 September. The pairing indicated in second position will play the second leg at home.

All Qualification Rounds games are played in a home and away format with the action getting underway on 15 September 2020. The four (4) winners of Qualification Round 2 qualify for the Regular Season, joining the 28 directly qualified teams in the main draw. The draw was carried out in such a way as to prevent teams from a same country facing each other in the Regular Season (with the exception of Turkey). 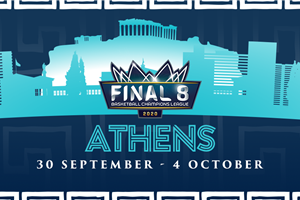