ATHENS (Greece) - Nikos Rogkavopoulos still is young and knows he has a long career ahead of him. But he learned a major lesson this season in the Basketball Champions League with AEK Athens - the lesson that patience pays off.

AEK has pieced together an impressive group of teams over Rogkavopoulos' three seasons with the club, giving the 18-year-old a vast wealth of knowledge and experience to tap into and learn the game even while not getting onto the court.

"I can name so many players but it would be a pity to forget someone. Almost everyone has given me advice or a helping hand, so I really appreciate it," Rogkavopoulos said.

"Practicing with all thes guys really helped me improve and learn new things about the game," Rogkavopoulos said.

Playing with Zisis is something different 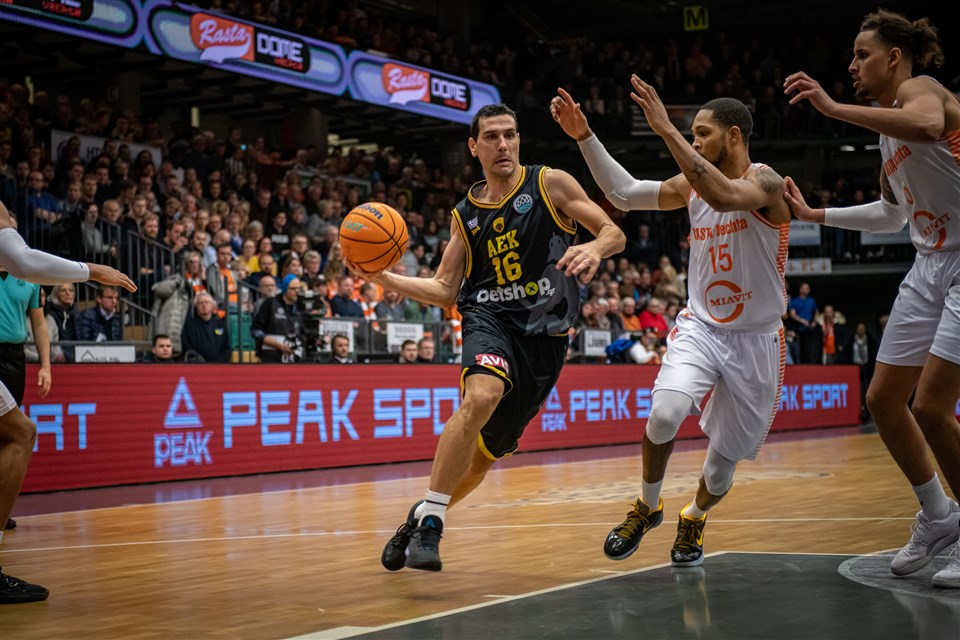 The 6ft 8in (2.03m) small forward did single out one player though, the great Nikos Zisis: the 36-year-old who has accomplished so much in the game over the course of illustrious career - both at the club and national team levels.

"Playing with a player like Nikos Zisis can really help you in your basketball career. He is an example of a great professional and a great teammate" Rogkavopoulos said of Zisis, who returned to AEK during the season after last playing with the club from 2000 to 2005. "Everyone on the team respects him, listens to him and enjoys being with him on the court. He really helps me because he was in the same position as me before."

Rogkavopoulos' beginnings in basketball go back to the local courts in the Athens district Marousi.

"Playing in Marousi was enjoyable. We had a lot of basketball courts and a good infrastructure, so anyone who cares about the game can really work," he remembered.

Rogkavopoulos was exposed to the game by his father, also named Nikos Rogkavopoulos, who played in the 1980s for clubs such as Ilysiakos.

"He helped me with my very first steps in the game, which came when I was 7 years old," he recalled. "I loved watching basketball and that's how I decided to start playing."

Rogkavopoulos grew up in the Doukas club, which was playing in Greece's second division A2 in 2016-17. It was that season in which Rogkavopoulos practiced alongside Manolis Papamakarios, who during his career had played with Olympiacos in the EuroLeague and in the Spanish ACB as late as 2014.

"I knew that he was one of the best shooting guards in Greece in the 2000s and 2010s. He had a great career and he was also a really cool man. That was my first year in a senior team so I remember him well," Rogkavopoulos looked back on playing alongside the then 36-year-old Papamakarios while being only 15 years old himself.

Rogkavopoulos' talent drew attention from outside of Greece as well - even before he played internationally. The mighty Real Madrid swooped in and made him an offer in 2016. Rogkavopoulos resisted the move though.

"When I had the Real Madrid offer I decided to stay in Doukas because at that moment I felt that it was better for me to stay in Greece," he remembered.

A summer later, Rogkavopoulos decided once again to stay in Greece - and that for the long term as he signed a six-year contract with AEK.

"I decided to sign with AEK because they are a big club and I saw that they believe in me as a player," he said.

The 2017 calendar year also saw Rogkavopoulos make his debut with the Greece national team ranks at the FIBA U16 European Championship 2017, Division B. The Greeks had been relegated from Division A in 2016 and Rogkavopoulos went to Bulgaria with the goal of getting Hellas back to the top flight.

"It was essential for the Greek national team to be promoted to the first division. I think we could have gotten a good result in Division A as well," said Rogkavopoulos, who collected 18.0 points, 6.9 rebounds, 2.4 assists and 1.4 steals while shooting 44.1 percent on three-pointers in helping Greece win the competition and also took home the MVP award.

"I believe that we were unlucky. We lost two really close games in the group stage against (hosts and eventual runners-up) Latvia and (third-placed finishers) France, and then we had to play Spain (in the Round of 16) who only lost one game and finished ninth," said Rogkavopoulos, who averaged 19.7 points, 6.6 rebounds, 2.1 assists and 1.4 steals with 45.0 percent three-point shooting in the tournament.

Welcoming the world to Greece

Greece was not only designated as hosts of the FIBA U18 European Championship 2019 but also for the FIBA U19 Basketball World Cup 2019 - with Rogkavopoulos getting the chance to play in both competitions.

"It was really nice playing in front of your crowd and I would love to play again a tournament like this in my country," said Rogkavopoulos, who averaged 13.7 points, 4.6 rebounds and 2.4 assists and 39.5 percent from long range in his first global competition as Greece ended up finishing 10th after playing against the likes of Argentina, Russia, Philippines, France, Senegal and Australia.

"The U19 World Cup was a very nice experience. Tenth place sounds fair, but my strongest memory was the group game against Argentina where we lost although we were up by 16 points. That gave us a really tough match-up against France. So if we had won the game against Argentina, maybe we would have made the Quarter-Finals."

Later that summer, Rogkavopoulos and his 2001-born generation took fourth place at the FIBA U18 European Championship 2019 in Volos.

"We were really looking forward to this tournament, and we had high expectations of ourselves. We did very well I think," said Rogkavopoulos, who averaged 11.7 points, 8.4 rebounds, 2.0 assists and 1.1 steals in being named to the All-Star Five.

"I would definitely trade (the spot in the All-Star Five) for a medal which makes 12 players happy and not just one," Rogkavopoulos added.

The 2019 summer came after Rogkavopoulos had debuted with AEK in the 2018-19 season, playing 16 games in Greece's top flight and averaging 1.7 points and 0.9 rebounds in 5.0 minutes per game, including totalling 7 points and 6 rebounds in 28 minutes over three games against Peristeri in the playoffs for third place.

The season also saw Rogkavopoulos play twice in the Basketball Champions League, playing 11 seconds in the double-overtime against Nymburk on Gameday 2 and then playing 1:25 minutes against Lietkabelis on Gameday 13 - as a 17-year-old.

"I don't think that I really learned many things because of the limited minutes, but it gave me extra motivation to work harder and harder. But of course it's always good to be a part of a European game," he said.

Rogkavopoulos had already experienced the ultimate high in the Basketball Champions League even though he was not actually a part of it as AEK won the 2018 BCL crown - at home in Athens.

"I remember that the atmosphere in the arena was spectacular. I have never seen that kind of crowd in my life," he said. "There were very tight games and at the end we won, so I'm really proud of the team's success."

AEK were actually kind of the Cinderella in winning that 2018 BCL trophy but have become one of the real powerhouses in the competition since then - reaching the Quarter-Finals last season and taking second place in their group this season.

"I see that the club has grown more and more. And expectations are becoming higher and higher every year. This can really get even better with the way team is working," Rogkavopoulos said.

Rogkavopoulos appeared in five Greek top flight games from October to the end of 2019. His work ethic was recognized by Papatheodorou, who began to give Rogkavopoulos more playing time starting in January.

"I think that I was working hard in general, and my chance to prove myself just came and I started earning coach's trust," Rogkavopoulos said.

He picked up 5 points, 3 rebounds, 1 assist and 1 steal in 16 minutes against Kolossos on January 11 and followed that with 7 points, 4 rebounds and 1 assist on January 25 versus Peristeri.

"It felt really good and I want to perform better and better in order to get more minutes," said Rogkavopoulos, who had totalled just 7 points, 7 rebounds, 5 assists and 1 steal in 15 minutes of the first five games.

Those performance led to Rogkavopoulos breaking out in earnest in the BCL against Anwil Wloclawek on Gameday 14 on February 5, when he nailed 4-of-6 three-pointers in scoring 15 points to go with 1 rebound in just 12 minutes of action.

No need to worry about the future, @AEKBC. @Nikos_Rogkavopoulos introduced himself to the #BasketballCL audience!

"The game against Anwil was very important for me because I was working really hard and I was waiting patiently for my chance to come, and I'm happy that it paid off," he said. "It was definitely a good moment."

Rogkavopoulos experienced the 2018 BCL crown up close but was not on the team - so the celebrations did not mean as much to him as the players who won it. But Rogkavopoulos got his first personal taste of club success just 11 days after his big BCL showing as he helped AEK win the 2020 Greek Cup with a 61-57 victory over Promitheas Patras.

"It was an awesome experience. We won the cup and I'm really happy that I was a member of this success," said Rogkavopoulos, who went scoreless but played 10 minutes in AEK's fifth Greek cup and second in three years. "Everyone celebrated it like crazy."

Rogkavopoulos decided in April to put his name in the 2020 NBA Draft. He knows he still has work to do to make it to the NBA but he believes in his work ethic and love of the game.

The BCL is scheduled to continue in September with the final eight teams playing in a knockout tournament - with AEK being included. It's unclear if Rogkavopoulos will play much in those games but he definitely wants to do his part.

"In the next season I see myself working hard and getting more and more minutes to help my team reach its goals," he said, knowing that being patient pays off. 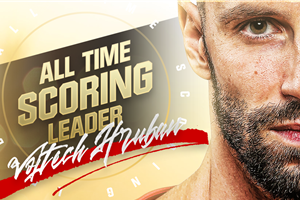 Czech him out: Hruban is the BCL all-time scoring leader

Which coaches have left their mark in the BCL?