Black 11 goes to the basket and shoots the ball. Defensive player White 32 blocks the shot and a foul is called. In the replay, it is clear that White 32 hits only the ball and no illegal contacts occur. Legal play and no foul should be called.

In the end of the 4th quarter, Yellow 20 creates an illegal contact on Black 11, who is dribbling in the front court. Black 11  ignores the ball and is not making a basketball action. This is a not a legitimate attempt to directly play the ball within the spirit and intent of the rules. The official must interpret the unsportsmanlike fouls consistently throughout the game and only judge the action. Referees can also use the Instant Replay System to review the play to upgrade or downgrade the foul. An Unsportsmanlike Foul should be called (C1).

White 0 receives the ball under the basket and is ready to shoot the ball. In the shooting action, White 0 fumbles with the ball. The ball is released from White 0's hands and he recovers the ball. This action is legal because the ball was released before the player returns back to the floor.

White 1 goes to the basket and is blocked by Red 31. After the block, White 1 is blocked again by Red 31. In the replay, it is visible that in both cases Red 31 touches the ball legally and no fouls should be called.

Red 14 dribbles the ball in the mid court when White 32 creates a contact from the side. The contact is, however, marginal and has no effect in the play and no foul should be called. The game time and score is irrelevant when judging the contacts of the players. 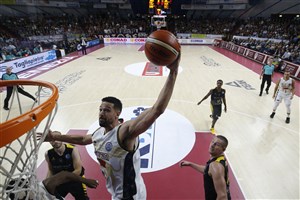