With Play-Off spots on the line for some clubs and leading positions in the standings for others, many of the competition's most talented players turned it up a notch. While there were plenty of deserving candidates, we've come up with a Team of the Week. 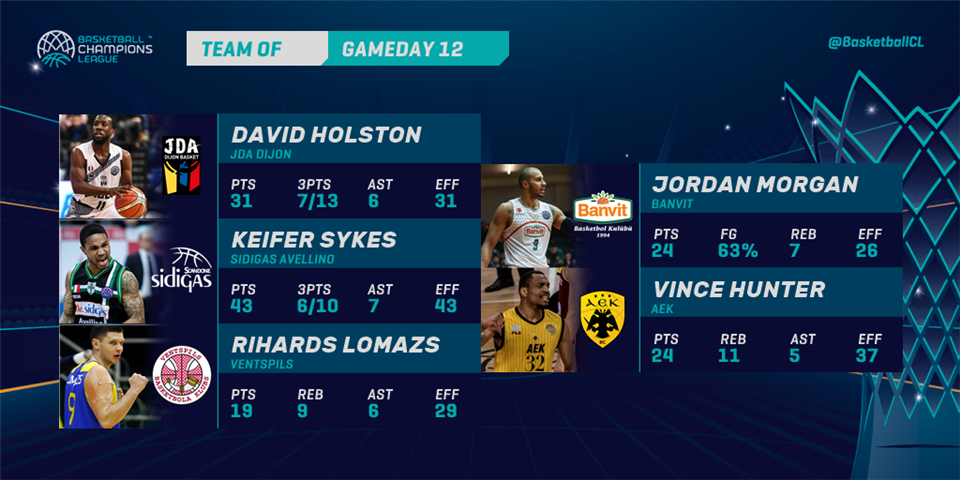 If you're wondering what had happened to Superman, we've got the answer. He showed up in Bandirma, Turkey, on Tuesday night, wearing a Sidigas Avellino jersey. Sykes did not, alas, save the day for Avellino as they fell in a tough game to Banvit, 96-88, but he almost did.  The point guard poured in a Basketball Champions League record 43 points, making 16 of 24 shots from the floor. He was 6 of 10 from behind the arc. The two-time Horizon League Player of the Year while the a player at the University of Wisconsin Green Bay during his NCAA days, Sykes is the first player to ever make the Team of the Week after a loss.

Is there a better shooter than David Holston in all of Europe 🤔?

The 32-year-old playmaker of JDA Dijon is not the biggest player in the BCL at 1.73m (5ft 8in) in height, but he never backs down against any player or team. Holston drilled 7 of 13 shots from deep and scored a season-high 31 points in his team's 99-91 triumph over Lietkabelis, a result that has kept the French club's slim hopes of reaching the Play-Offs alive. 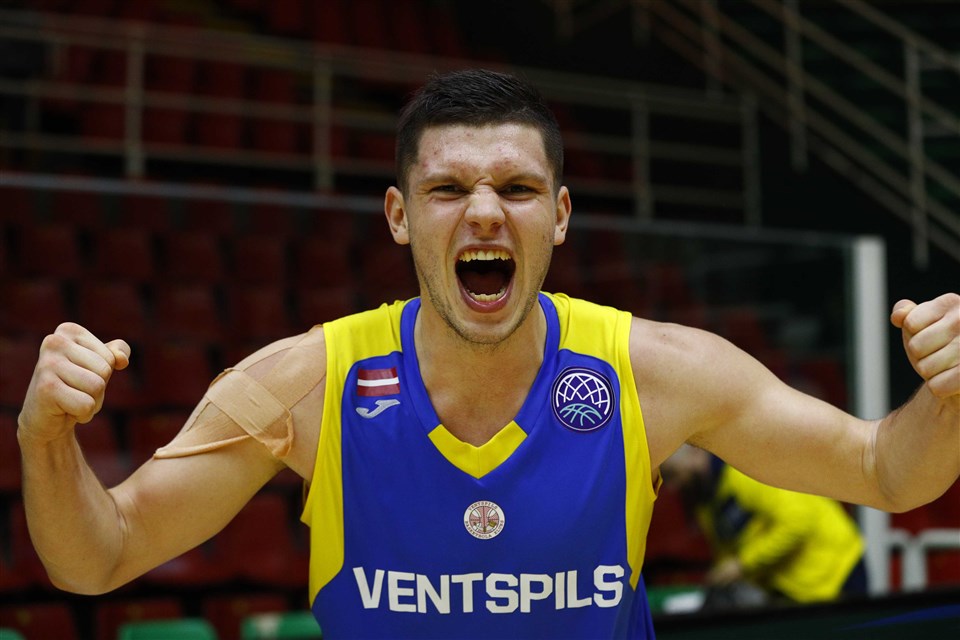 Lomasz has been turning on the style this season for Ventspils

If you thought Ventspils' chances of reaching the Play-Offs were dead after their 78-63 drubbing at Banvit on January 9, you were wrong. The Baltic side, due in large part to Latvia international Lomasz, is alive and kicking. After scoring 18 points in last week's 88-77 victory over Le Mans, Lomasz poured in 19 on Tuesday to lead Ventspils to a 99-81 victory at MHP Riesen Ludwigsburg. Lomasz also had 9 rebounds and 6 assists. The result has left Lomasz and Co sixth in Group A but their 5-7 record is the same as fourth-place Le Mans and fifth-place Niznhy Novgorod with two weeks remaining in the Regular Season. 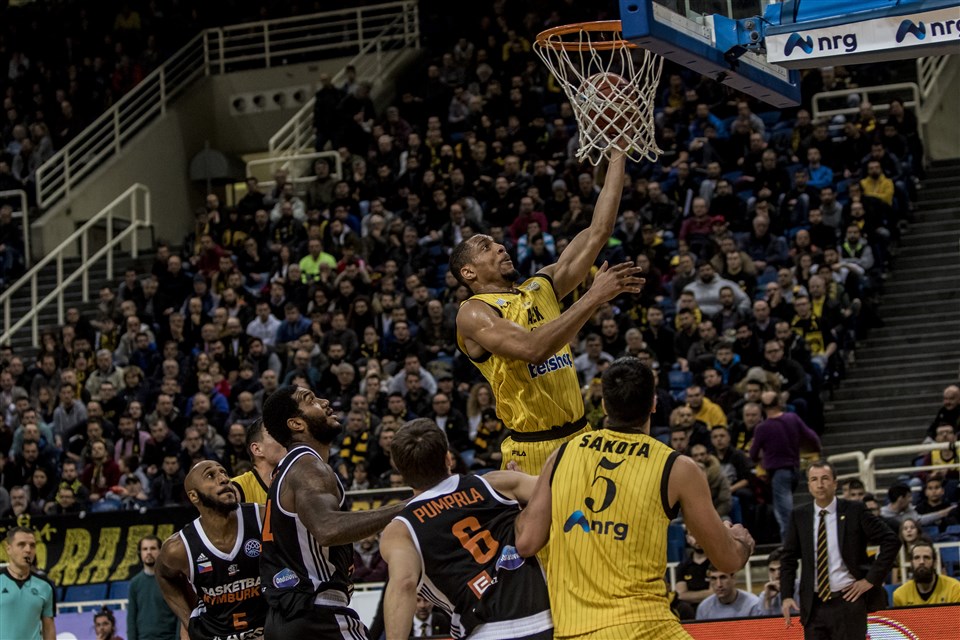 The crowds have been turning out to watch Hunter this season

Wednesday's night's 24-point, 11-rebound performance in a 90-82 victory at Montakit Fuenlabrada was further evidence that that Hunter has been arguably the top player in the competition this season. Hunter also had 5 assists, 2 steals and 2 blocks. Can you say, "In-Vince-able"? 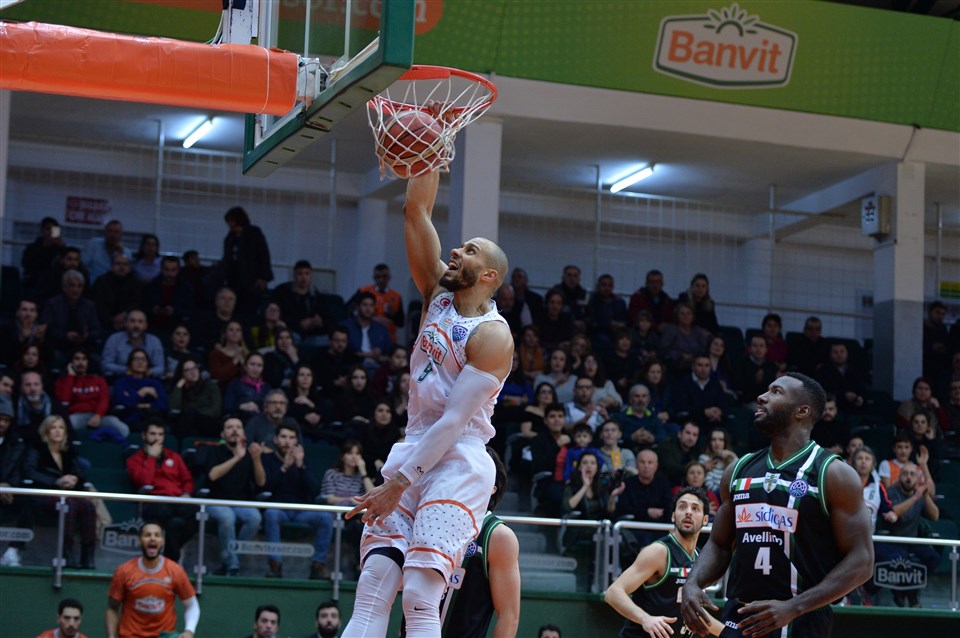 For the longest time this season, it seemed like Morgan, despite putting up big numbers for Banvit, wouldn't make the Team of the Week. Well, his time has finally arrived. Morgan turned on the style against Sidigas Avellino, coming up with one dunk after another on his way to 24 points. The 2.03m (6ft 8in) center also had 7 rebounds and 3 assists. 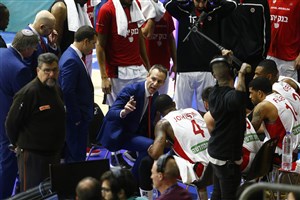 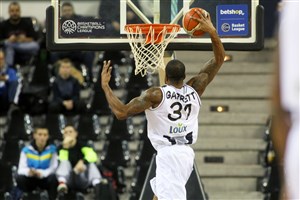