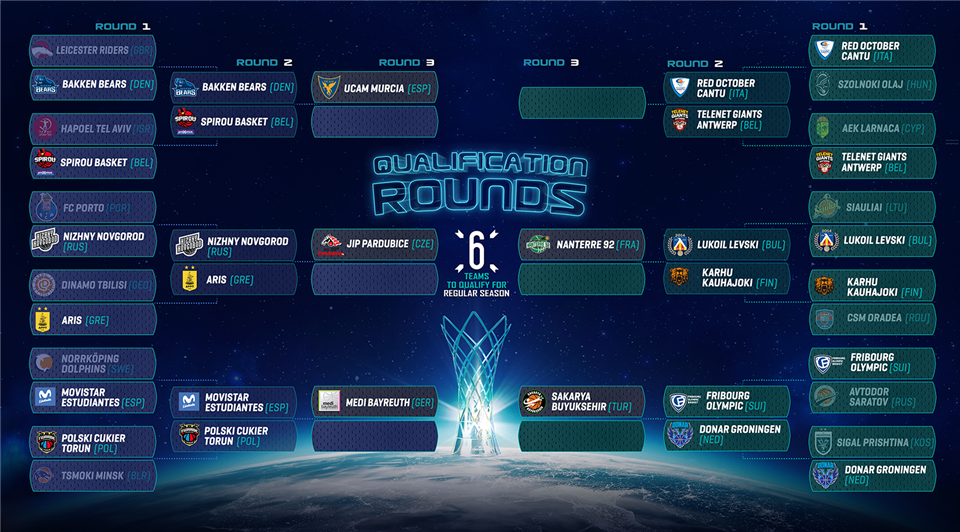 Greek side Aris, fresh off blowing out Dinamo Tbilisi by 64 points on aggregate in Qualifying Round 1, now have a more formidable challenge in the shape of Nizhny Novgorod. The Russian club brushed aside FC Porto by 43 points in their Qualifying Round 1 tie.

The first leg will be in Russia on Tuesday and the return in Thessaloniki on Friday. The winner of this tie will then face a Czech side, JIP Pardubice, in Qualification Round 3.

"It has a very strong administrative potential, with great respect for European basketball," he said. "It has a very good coach (Zoran Lukic) with European experience....

"Surely Nizhny is a very good team that can play in both halves of the court. We'll see what its weaknesses are and which ones we can exploit..."

An intriguing opening leg will be played in Torun, Poland, on Tuesday when Movistar Estudiantes of Spain, a team that played in the Basketball Champions League last season and barely missed out on advancing to the Play-Offs, visit Polski Cukier Torun. The winners will then go into Qualification Round 3 to take on Medi Bayreuth, a side that finished just ahead of Estu in the Group Phase of last year's competition and then made it to the Quarter-Finals.

Estu just prevailed in an awkward Qualifying Round 1 tie with Norrkoping Dolphins of Sweden, winning 143-133 on aggregate. The Madrid club carried a 12-point lead into Saturday's second leg at home and lost, 71-69. They got 15 points apiece in the second leg from Nikola Jankovic and Goran Suton, the Gameday 13 MVP in the 2017-18 campaign.

Josep María Berrocal, the coach of Estudiantes, is looking for his team to make big strides this season, starting on Tuesday.

"There are many things to improve," he said. "It's the sixth week with the team together since the preseason began and there are a thousand things to improve. We must improve on rebounding, have more patience in attack ..."

Torun are not going into the game in a blaze of glory after falling in the second leg of their Qualification Round 1 tie at Tsmoki Minsk, 90-73. Even so, the Polish outfit was such a comprehensive winner in the first leg that it still claimed a 160-151 aggregate triumph.

Red October Cantù and Telenet Giants Antwerp meet in the north of Italy knowing that victory in their tie will be good enough to advance to the Regular Season.

Lithuanian outfit Lietkabelis would have been the team waiting for them in Qualification Round 3 but they were promoted to the Regular Season following the withdrawal from the competition by Turkish side Eskisehir.

Cantu scraped a 69-68 home win in their Qualification Round 1 tie with Szolnoki Olaj but then rolled to a 90-71 triumph in Hungary for a 159-139 victory on aggregate.

Frank Gaines promises to be a handful for Antwerp. The 28-year-old erupted for 26 points in the game at Szolnoki Olaj. He was 8 of 11 shooting from the floor, including 3 of 6 from the arc.

“ON DEFENSE, WE ARE FINALLY STARTING TO PLAY BETTER. NOW WE JUST HAVE TO IMPROVE, STEP BY STEP, AND GET READY FOR THE QUALIFICATION ROUND 2.”- Cantu coach Evgeniy Pashutin

Evgeniy Pashutin, the Cantù coach, saw some encouraging signs in the second leg.

"On defense, we are finally starting to play better," he said. "Now we just have to improve, step by step, and get ready for the Qualification Round 2."

Antwerp prevailed 158-129 on aggregate against AEK Larnaca to reach the Qualification Round 2.

Donar Groningen of the Netherlands are facing a two-legged showdown with Fribourg Olympic of Switzerland after writing another interesting chapter in their Qualification Round history.

🎉🇳🇱 @Donar_Official pulled off a big comeback and stunned Z Mobile Prishtina to advance to the #BasketballCL Qualification Round 2 vs @FribourgOlympic!

Donar almost reached the Regular Season last year. They made it to a Qualification Round 3 tie with Estudiantes and drew the first leg 76-76 at home before falling 77-69 in the return.

Fribourg showed great potential in their opening round tie last week against Avtodor Saratov, claiming a 167-165 aggregate success. Dusan Mladjan led a balanced attack in their 78-76 second-leg win with 18 points. The winner of the Donar/Fribourg tie will meet Sakarya Buyuksehir in Qualification Round 3.

Sofia, Bulgaria, will be the site for Lukoil Levski's Qualification Round 2 opener against Finland's Karhu Basket.
Levski cruised past BC Siauliai in the last round, 170-144, on aggregate while Karhu saw off the challenge of CSM CSU Oradea, 167-158, on aggregate.

The winners will take on Nanterre 92 in Qualification Round 3.

The other Qualification Round 2 pairing will be Bakken Bears against Spirou Charleroi, that qualified on Monday by eliminating Hapoel Tel Aviv 73-59 in Belgium (146-135 on aggregate). 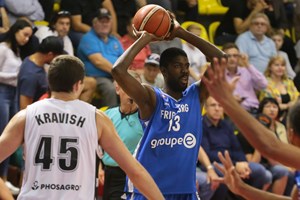 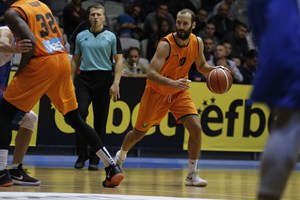