Peristeri group: The hosts as favorites, but watch out for four champions

PERISTERI (Greece) - One of the four Basketball Champions League Qualification Round tournaments will be in Greece, where Peristeri are looking like the hot favorites. Their job will not be easy against four domestic champions, and another finalist.

KK Split reached the Final in Croatia, losing out in Game 5 of the best-of-five series against Zadar, and along with Peristeri, they ended up being the only non-champion of the group. Petrolina AEK are coming in as champions of Cyprus, U-BT Cluj Napoca lifted the trophy in Romania, Salon Vilpas did the same in Finland, and Fribourg Olympic are back in the BCL as the champions of Switzerland.

KK Split and Petrolina AEK will open up proceedings in Peristeri on Monday, September 13. It will be the battle between the experienced Cypriot side and the youngsters from the Adriatic coast, as 39-year-old Aristides Koronides, 38-year-old Andreas Sizopoulos, and 35-year-old Iakovos Panteli headline the Petrolina AEK lineup, while 19-year-old Ivan Perasovic looks to get a taste of international basketball with his hometown club Split.

Shaquille Goodwin, Eden Ewing and Quentin Snider are the three American players who are here to help the Cypriot champions, and Snider already knows everything about playing for Petrolina. Snider played for Benfica and Feyenoord before arriving in Cyprus in 2020, and his first season was a success in Larnaca, with 15 points and 6 assists per game last season.

Flashback to 2016: Quentin Snider puts Bam Adebayo in a blender as the #10 Cardinals go on to beat the #6 Wildcats 73-70 🌀 @QuentinSnider4 #BeatUK pic.twitter.com/cnVavFBXe8

Meanwhile, the three-time FIBA European Cup winners from Split - who won their three consecutive titles as Jugoplastika and Pop 84 - are coming in with a much younger team. The biggest name is the one of Ivan Perasovic, a 19-year-old prospect who turned heads back in 2018, leading Croatia to gold in FIBA U16 European Championship.

5 minutes of work, 12 points for Ivan Perasovic (while all other players in the game combined for 10). #FIBAU16Europe @CbfHks 🇭🇷

Along with Velimir's son, a number of well known players from FIBA Youth Events are also on coach Srdjan Subotic's roster. Darko Bajo, Sani Campara, Lovre Runjic, Karlo Zganec are all with the team, Croatian national team player Toni Perkovic is also there, and two familiar BCL faces have signed with the club this summer.

Tre McLean played the Basketball Champions League with Brose Bamberg and Peristeri, having a 43 percent three-point shooting season with the German side in 2019-20. Shawn Jones will be the double-double machine, which is what he was for Dinamo Sassari, Hapoel Holon and Anwil Wloclawek in this competition.

On Monday, the champions of Romania and Finland will face each other in the other Quarter-Finals tie. Both U-BT Cluj Napoca and Salon Vilpas are looking to make the Regular Season of the BCL for the first time, with Cluj already trying their luck in the past Qualifiers in 2016, 2017 and 2020.

This time around, coach Mihai Silvasan has a powerful roster in front of him. Names like Stefan Bircevic and Andrija Stipanovic are handling the middle of the floor, and Romanian national team players such as Giordan Watson and Nandor Kuti are also there.

But in Brandon Brown and Dustin Hogue, U-BT Cluj Napoca have a one-two punch of newcomers that could take them all the way in Peristeri. Brown is a point guard who was in MVP discussions while at Nizhny Novgorod, and Hogue is a dominant big guy who spent the last five seasons in Trento and Enisey.

🧠 Brandon Brown was the brain behind @BC_NN's win, filling it up with 19PTS & 9AST! #BasketballCL pic.twitter.com/wk7zJFtnht

Salon Vilpas will face an uphill battle against this loaded Cluj team. Finnish champions fit the mold of having familiar national team names on board, with Mikko Koivisto and Roope Ahonen, but their international players aren't all that experienced.

Marcus LoVett Jr is a 25-year-old who played in Turkey and Portugal last season, Bryan Griffin, Brian Fobbs and Justin Young are all just 23, and their average age as a team would've been even lower than 26 if they didn't have Jeremiah Wood on board. But since he's averaged 19 and 15 points per game for Salon Vilpas over the last two seasons, having a 36-year-old like Wood sounds like a good idea for this squad.

The winner of Petrolina AEK v KK Split will face Fribourg Olympic in the Semi-Finals. The Swiss champions have been here before, reaching the Regular Season in 2018-19 with coach Petar Aleksic in the leading role.

Aleksic will be around for his ninth season with the team in 2021-22, and it seems like he's put together a strong team again. Arnaud Cotture is the high-flying power forward, Quincy Diggs is coming in to help with the other forward position, team captain Boris Mbala is only 25 and already in his sixth season with the club, same as 26-year-old Natan Jurkovitz who is coming back after a brief Israeli experience with Hapoel Beer Sheva.

Back in the summer of 2018, Fribourg eliminated Avtodor Saratov, Donar Groningen and Sakarya BB in the Qualifying Rounds. In the Regular Season, they finished 7th in Group B, picking up three wins, not enough to upset Tenerife, Venezia, Nanterre and PAOK who advanced from the group.

In 2020-21, Fribourg Olympic played the FIBA Europe Cup, reached the Play-Offs before losing to Balkan.

Other than Fribourg Olympic, Peristeri are the only other team with Regular Season experience in this group. They will face the winner of U-BT Cluj Napoca v Salon Vilpas in the Semi-Finals, and the fact that they are the hosts of this event speaks volumes about their willingness to get back to the group stage again.

"We have a goal from the beginning of the season, to get from the Qualifiers into the group stage of the Basketball Champions League. We are focused on that, we will give it our all to make it happen," Peristeri head coach Sotiris Manolopoulos said.

"We are trying to be at our best on September 15, in our first game of the BCL Qualifiers, and two days later in the Final. We have worked really hard to build the chemistry in the team, trying to be 100 percent ready for that time," Dimitris Moraitis added.

Moraitis came over from AEK, same as Dimitris Katsivelis, and expect the two of them to handle the point guard position. Linos Chrysikopoulos also made the short trip from OAKA to Peristeri, and the biggest name they have is Yanick Moreira as their starting center.

Moreira already played BCL with Virtus Bologna and Peristeri, then switched to AEK and started strong last time around, winning the MVP of November award in this competition in 2020-21. But a leg injury kept him out mid-season. Coming back to Peristeri may be his way of getting back to his best and proving both Moreira and Peristeri belong in the Basketball Champions League. 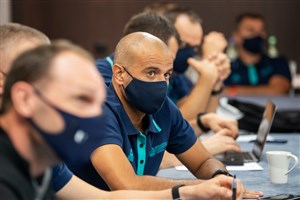 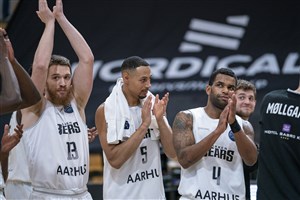