MIES (Switzerland) - He needed just four games to put his name above all the other players that have ever played in the Basketball Champions League. TJ Shorts led Telekom Baskets Bonn while doing something we never saw before.

Bonn defeated AEK, Galatasaray Nef were better than Hapoel Atsmon Holon, UCAM Murcia held Falco Szombathely down, and Limoges CSP concluded a perfect day for the hosts. For more, let's go through our Seven Takeaways, a regular feature on Gamedays in Season Seven.

When he was hot, Kevin Punter was the biggest scoring threat in all of BCL. In fact, over the course of six seasons, former Rosa Radom, AEK and Segafredo Virtus Bologna guard was the only man to ever connect three straight BCL games with 25 or more points.

Season Seven, set the stage for a new marksman. TJ Shorts opened up his BCL account by tying Punter's record in his first three games, and with AEK coming to Germany, he knew he could set a new record in this competition. For some, that would've been extra pressure. For TJ, it was extra attention, which he seems to enjoy.

Shorts was his usual self, unstoppable, climbing all the way up to 27 points on the night. TJ Shorts is now the only player in BCL history to have four straight games with 25 or more points, and he got the fourth one by shooting 12-of-21 from the field in 31 minutes of playing time.

Bonn won the game 80-72, completed the sweep over AEK, and now sit all alone at the top of Group B. Round of 16 ticket is just around the corner, but it's not going to be an easy target because Shorts and his crew have to travel to Italy and Turkey to face UNAHOTELS Reggio Emilia and Pinar Karsiyaka in the remaining two road games.

Galatasaray Nef defeated Hapoel Atsmon Holon 88-75 in Istanbul to claim the tiebreaker and steal #1 spot in the group from the previously unbeaten Holon side. With minor lineup changes and tweaks, coach Andreas Pistiolis now sees his side riding a confident wave of three straight wins in all competitions. Perfect panacea for the poison, since they had been on a three-game losing streak just before that.

The key to their win on the road in Bursa against Bursaspor was playing small-ball, getting Dee Bost, Tyrus McGee and Dylan Ennis together on the floor, pairing them up with forwards such as Angelo Caloiaro and Sadik Emir Kabaca, which got them from a 78-78 tie all the way to an 87-78 lead in just three possessions down the stretch, when Kabaca and McGee knocked down three straight threes.

Going small was the answer for Holon, too. Coach Pistiolis was searching for a long time to find a groove, and he found it at a perfect timing, in the fourth quarter. Bost, Ennis, Hummer, Caloiaro and Kabaca took Galatasaray from +1 to +13 in those ten minutes, each of them getting double digits in the +/- department, led by Kabaca's +20.

Young man, still just 21, enjoys playing the stretch "five" in this system. He finished with 17 points, 5 rebounds and 5 assists, and since he's such a fan favorite over there, his true positive impact is hard to measure. Maybe in decibels, because the Sinan Erdem Arena kept getting louder and louder for him...

Galatasaray are fun. Top of the group, too. They have to travel to Poland to face Legia Warszawa, and play Filou Oostende at home, that #1 spot is theirs for the taking.

These two have played four BCL games over the last two seasons:

Looking forward to the next one!

Tiebreakers are so important in this competition system. That's why Limoges CSP looked down and out, dropping to 0-3 with a 20-point defeat to VEF Riga, their closest rival in the standings. But with Jayvon Graves running the show, anything is possible.

He had 17 points, 6 assists, 5 rebounds and 3 steals off the bench to charge the French club to a massive 80-53 win over VEF Riga, putting them above the Latvian champs in the standings, avoiding that last place for now.

Graves was so important that Limoges were a +42 team with him on the floor, in just 28 minutes of action. Just like that, Graves led them out of grave danger and into safety.

For now, of course.

As if the loss wasn't painful enough, Riga also need to face the music. This was their lowest scoring road game in BCL history, and at 1-3 without a tiebreaker they now know that they have to steal a win over BAXI Manresa and/or SL Benfica to have any chance of avoiding the last spot in Group F.

#6 Just another Slovenian kid in Spain

Urban Klavzar is a kid from Slovenia, who joined Real Madrid as a 14-year-old. Now, as an 18-year-old, he is searching for a serious role and a bigger step in his career with UCAM Murcia, and on Wednesday, he put the rest of the continent on notice.

He did not score a single point in the Liga Endesa or the BCL so far, but against Falco Vulcano Szombathely, Klavzar was the reason Murcia won the game 81-74. It's not just because of his BCL career-high 14 points.

It's because nine of those came in the closing 100 seconds of the game, sealing the deal, icing the game from the charity stripe and even pushing UCAM towards that 10-point gap from the first game. They did not get there, but up at 3-1 with two games to play, they have to feel good about their chances anyway.

Along with Klavzar, James Anderson put together an impressive game, too. With 17 points and 11 rebounds, the 33-year-old had his first BCL double-double.

You know the format by now, group winners are moving straight to the Round of 16, second- and third-placed teams will face each other in the best-of-three Play-In series. With just two games remaining in Groups A and B, the pairings are beginning to take shape.

Season Seven, as unpredictable as ever. 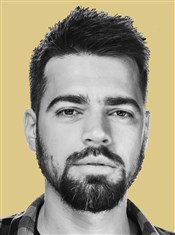 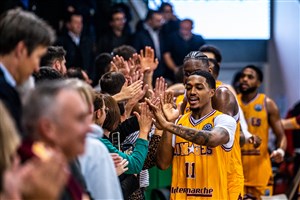 Play-In picture: What if the Regular Season ended today?