Galatasaray hit the Century Mark in big Win over Limoges

ISTANBUL (Turkey) - Galatasaray Nef sent a message to the three teams in the Round of 16 Group K, as well as the other teams left in the Basketball Champions League, with a convincing and dominant 100-73 win over Limoges CSP.

Galatasaray scored 100+ points only for the second time in their three seasons in the BCL after doing it against Nymburk in October 2021. They have scored 90 or more points in each of their last two BCL games, as many times as in their previous 16 games in the competition.

Turning point: Limoges got out to a 16-9 lead, but Galatasaray closed the first quarter on an 11-4 run to tie the game. Galatasaray picked it up in the second quarter which proved to be when the game turned around in their favor, outscoring Limoges 28-17 behind Daron Russell's 11 points to take a 48-37 lead into halftime.

Galatasaray stretched their lead by another 7 points in the third quarter for a 73-55 lead heading into the final quarter, and it was more of the same in the fourth quarter, as they closed the game with an impressive showing.

Game heroes: It was a three-headed monster that led Galatasaray tonight.

Newcomer Daron Russell led the team in scoring with 20 points and 6 assists on 5-of-7 shooting from three-point range.

Another new addition, Dusan Ristic, had a double-double with 18 points and 11 rebounds along with 3 assists in only 19 minutes for a game-high efficiency rating of 29. The 27-year-old became the first player this season to tally 15+ points and 10+ rebounds while playing less than 20 minutes in a game.

The third member of the three-headed monster was Angelo Caloiaro, who chipped in 18 points, 8 rebounds and 2 assists and shot 7-of-10 from the field.

The three players combined to make all 12 of their free-throw attempts, as well as 19 of the team's 35 total made shots.

Stats don't lie: Galatasaray outrebounded Limoges 41-22 (22 rebounds are the fewest by a team in the BCL this season) and 18-9 on the offensive glass which led to 20 second chance points for Galata. They also got 50 points from their bench with Russell and Ristic leading the charge to combine for 38 of those points.

There was a big disparity in free-throws that favored Galatasaray, as they shot 20-of-22, while Limoges only got to the line six times and made five.

Bottom line: Galatasaray kick off the Round of 16 Group K 1-0 and the Turkish club will host AEK in their next game on Tuesday January 31.

Playing without their top two leading scorers Bryce Jones and Desi Rodriguez, Limoges faced an uphill battle in this game and begin the Round of 16 0-1 in the group. They were led in defeat by Tomas Kyzlink who finished with 16 points on 7-of-8 shooting from the field off the bench. The French club will host Unicaja in their next game on Tuesday January 31.

"Coach emphasized intensity on the defensive end and making hustle plays and I feel like we did that throughout the whole game. I really enjoyed playing in front of these fans today and I'm excited to keep this going. My teammates made it easy for me today and coach helped me get acclimated early." - Daron Russell, Galatasaray Nef

"It was really important for us to start the Top 16 with a good win against a good opponent. Guys were focused, the team was motivated, and we fought from the first minute. They hustled which was something we were missing in previous games. We hustled on defense, we hustled in rebounds. I'm very happy to see the rebounding numbers against a very athletic team. It was just the first step, but first step is always really important." - Andreas Pistiolis, Head Coach Galatasaray Nef

"A tough night for us. When you come to a place like this, you can't allow your opponent to score 100 points. For whatever reason, all the 50/50 balls, we lost, and we just let them play their game. Every game is a war, and we need to approach it like that." - Tomas Kyzlink, Limoges CSP

"We played less than average game on defense. I'm not upset in general for the game because first, we have to put back the pieces in the team. In this situation, it wasn't easy without the point guard (Bryce Jones) and the four (Desi Rodriguez). We didn't fight enough to be a fighting team and play with a level that satisfies the Top 16." - Massimo Cancellieri, Head Coach Limoges CSP 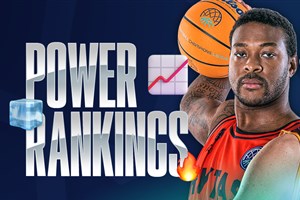 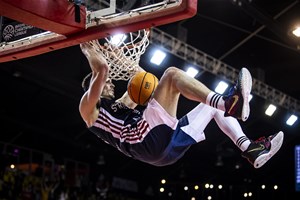 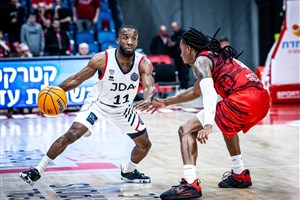