TREVISO (Italy) - In what is now known as the Animal Kingdom Group, Belfius Mons-Hainaut, also known as the Foxes, are next to ZZ Leiden and Tsmoki-Minsk, also known as the Dragons. The other side of the draw has the London Lions and the Bakken Bears facing the hosts, Nutribullet Treviso.

Belfius Mons-Hainaut are coming in as the runners up in the Belgian League, while ZZ Leiden are the reigning champions of the Netherlands. Tsmoki-Minsk are back in the BCL action after winning their 13th straight title in Belarus, the London Lions finished as runners up in BBL, and the Bakken Bears won their 19th Danish championship earlier this year.

Nutribullet Treviso are hosting the event in the legendary Palaverde, which was Benetton Treviso's home arena from 1983 to 2012 and saw some of the biggest games and names in the history of European basketball. The new club from Treviso, formed in 2012, is trying to bring the town back to the basketball map.

The first game of the program in Italy will be the Benelux Derby between Belfius Mons-Hainaut and ZZ Leiden. The Belgian side came within 40 minutes of reaching the Regular Season in 2020-21, but lost the Final of the Qualifying Round to Bakken Bears 12 months ago.

Vedran Bosnic's boys moved to FIBA Europe Cup last season and reached the Quarter-Finals, where their quest was ended by the Polish champs Arged BM Stal Ostrow Wielkopolski. ZZ Leiden are also a team with loads of FIBA Europe Cup experience, having played the Regular Season there three times since 2015-16.

Playing the FIBA Europe Cup and flirting with a BCL appearance is not the only connection between these neighbors. ZZ Leiden won the Dutch League in 2021, powered by Emmanuel Nzekwesi, who was chosen as the MVP of the season and also led the league in scoring with 21.7 points per game. Nzekwesi is expected to play in this one - but for Belfius Mons-Hainaut, who picked up the Dutch power forward over the summer.

Does that transfer make the Foxes strong favorites to win this tie? Or, does it fuel additional motivation into ZZ Leiden, who will try to show that they are good even when you take their best player out of equation?

"Mons are a formidable opponent," Leiden head coach Geert Hammink said. "But we are going to prepare to win this game, and see who we meet next. It is clear that all the teams in the Qualifying Rounds are of a high level, but so are we, and I'm looking forward to this challenge."

Other notable names in this one: 36-year-old Justin Cage, who is about to start his 13th season with Belfius Mons-Hainaut, and Worthy de Jong, who is starting his 11th season at ZZ Leiden, where he established himself as one of the best Dutch players of all time, winning multiple awards, including the Dutch League Play-Offs MVP in 2021.

We haven't had a British team in the Regular Season yet. London Lions are set to make it happen in 2021-22, but their assignment is about as tough as it gets, having to play against ambitious hosts in their own arena in a do-or-die game to start the tournament.

Dirk Williams and Justin Robinson led the way last season, and the team got another big name in Marquis Teague, a former member of the Chicago Bulls, Brooklyn Nets and Memphis Grizzlies from 2012 to 2018. But not even Teague could say he was the biggest prospect on this squad.

That honor belongs to Joshua Ward-Hibbert, a Grand Slam winner at 18, claiming the 2012 Australian Open Boys' doubles title. A year earlier, Ward-Hibbert made history in Wimbledon, clocking the fastest serve by a junior player ever, serving at 133mph/214kph. He switched to basketball and it seems like a smart decision, as he now gets to show what he's capable of at international level.

While the Lions are about to experience this level of basketball for the first time, Nutribullet Treviso put together a team with loads of experience, led by coach Max Menetti, a legend in Reggio Emilia who is on his way to establish a similar status in Treviso since taking over in 2018.

Treviso are coming into the tournament with four wins in four games in the Italian Supercup, clicking together early on in the season. Nicola Akele, Giordano Bortolani and Davide Casarin are giving the team good Italian vibes as they are all just starting their careers, and international help is coming from DeWayne Russell, Henry Sims, Aaron Jones, Michal Sokolowski and Tomas Dimsa.

Having a big coaching name like Menetti, and the mix of international experience and domestic youth, it doesn't seem like the pressure could slow down this Nutribullet. With the fans in the stands, it could be a starting point for something big in Treviso basketball history.

The winner of Belfius Mons-Hainaut v ZZ Leiden will face Tsmoki-Minsk in the Semi-Finals. The champions of Belarus are aiming for another appearance in the Regular Season, and they are doing it the same way as they've done it before - a lot of domestic firepower, with highly motivated international players who are getting a chance to prove their worth as leaders.

DeAngelo Isby played in Slovakia before arriving in Minsk, Angelo Warner is coming over from Hungary, and Robert Upshaw played the second division in Turkey last season, putting up 16.5 points with 7.3 rebounds for Konyaspor.

The only man not fitting in with the usual Tsmoki-Minsk scouting is Stefan Jankovic. A big name, the 28-year-old Serbian played for Missouri and Hawaii in the NCAA, then went to Crvena Zvezda and Partizan, while also getting a taste of BCL with AEK in 2019-20. But he is yet to average more than 20 minutes per game as a pro, so he may get the chance to do it with the Dragons.

Bakken Bears await on the other end of the draw, ready for either London Lions or Nutribullet Treviso in the Semi-Finals. The Danish champions kept the core together with Adama Darboe, Michel Diouf, Ryan Evans, Darko Jukic, Thomas Laerke, Tylor Ongwae and Morten Sahlertz all returning for another season.

The new guys are looking like they are going to make the fans in Denmark forget about DeShawn Stephens and QJ Peterson in an instant. Travis Taylor is coming over after a pair of seasons in Hungary, Frank Bartley averaged 14.3 points for medi Bayreuth in the Bundesliga last season, and Jarred Ogungbemi-Jackson looks like an MVP candidate already.

The winner of this Qualifying Round will move to Regular Season Group D, where AEK Athens, Falco Szombathely and VEF Riga await. Peristeri group: The hosts as favorites, but watch out for four champions 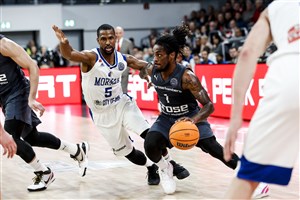