VILNIUS (Lithuania) - It seemed 2020-21 season was not going to be a memorable one for Rytas Vilnius, but a late run in the Lithuanian League saw them win 16 of 17 games and reach the Finals, booking another trip to the Basketball Champions League.

Coach Giedrius Zibenas took over midseason and earned the trust of the fans and the front office, who signed him to a new contract for the 2021-22 season. Here's what the 37-year-old coach has on his coaching board for the new semester: 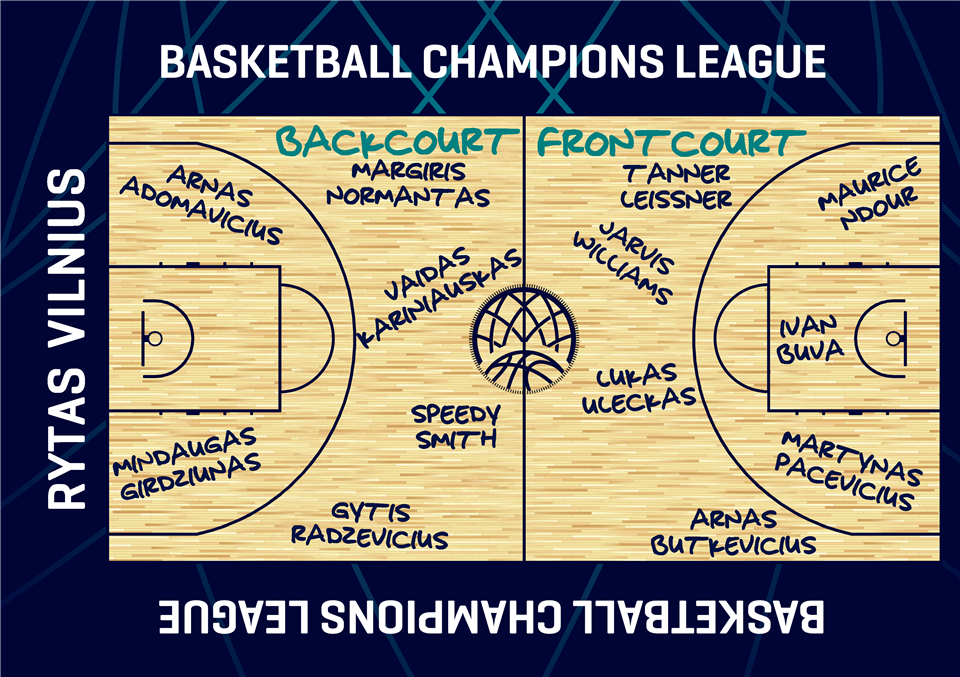 On October 25, the issues with the frontcourt injuries were solved. Following the injury of Tanner Leissner, Rytas Vilnius went back to the market to find another forward in their rotation, and they didn't have to search far and long. Maurice Ndour is back with the team.

The Senegalese power forward first signed with Rytas on October 15, 2020, and appeared in four BCL games, averaging 9.8 points and 4.8 rebounds per game. The 29-year-old then moved to China, and after a term with Zhejiang, will now wear the red, black and white of the Lithuanian giants.

On September 30, Rytas Vilnius announced the arrival of Marko Tejic, to help in the frontcourt. The Serbian big guy is 26, and comes after a successful run with Studentski Centar Derby in the second division of the Adriatic League. The club achieved promotion to the first division, and Tejic's 12 points and 6 rebounds in 18 minutes per game are a big reason why.

On November 11, Tejic was released from the club.

Rytas also signed Speedy Smith, to help in the backcourt. Kenneth Smith was born 28 years ago, and got the nickname Speedy almost immediately thanks to his grandma. At 6'3''/1.91m, he is a pass first point guard who spent the last season with Limoges CSP in France.

Smith went through four years of Louisiana Tech, and joined VEF Riga in his rookie year in Europe in 2015-16. He spent the next four seasons in the NBA G League, before returning to the Old Continent with Szolnoki, Proximus Spirou, Maccabi Haifa, and Telenet Giants Antwerp and Limoges CSP in 2020-21.

He only played three BCL games last season, but managed to collect 30 assists, showing his head is always up and he's scanning the floor for open men.

Buva could still be considered a new player compared to the others, as he joined the team in February 2021. But he turned out to be an instant success for the Rytas Vilnius squad, putting up big numbers, helping the team pick up an away win over arch rivals Zalgiris with a 34-point performance.

The Croatian center turned 30 in May, and he has previous BCL experience with Besiktas and Gaziantep. Buva played 15 games for Rytas last season, averaging 14.4 points and 6.1 rebounds in 21.6 minutes per game for the Lithuanian powerhouse.

Tanner Leissner spent his collegiate career at New Hampshire and turned pro in 2018. His path took him to German Second Division, Israel, German First Division and Turkey. While playing for Afyon last season, Tanner averaged 11.9 points and 5.2 rebounds per game.

San Antonio, Texas native is 25 and said he wants to become a college coach. But with the way he's playing, the coaching part of his career can be put on hold for another decade, as Leissner went from the German Second Division to an international league like BCL in just three years.

Vaidas Kariniauskas is a 27-year-old guard from Alytus, Lithuania. He started his professional career with Zalgiris in 2009, and played for Lietkabelis, Kymis, Cantu, U-BT Cluj Napoca, Oradea, Igokea, Nevezis and Uniclub Casino - Juventus before arriving in Vilnius.

Margiris Normantas is a man who was born in Vilnius, and was already a part of the Rytas club, from 2015 to 2019. He is now returning as a 24-year-old who spent the last two seasons with Lietkabelis, and also has previous experiences with Perlas Vilnius and Nevezis.

Jarvis Williams is the man who will help on the defensive end of the floor. He is a 28-year-old who can cover the "four" and the "five" position, and started his professional career with Slask Wroclaw in 2015, before going to Turkey, France, back to Poland, the Netherlands and Italy.

He has been a double digit scorer in every single season he played from 2013 to 2021, and he put up 12.4 points and 8.3 rebounds per game for Vanoli Cremona in the Italian League in 2020-21. Williams is responsible for highlight plays, steals, blocks, dunks - you name it. 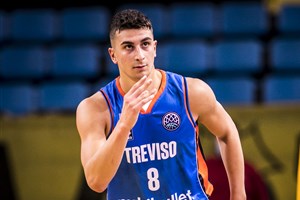 Bortolani learning all he can with lessons in Treviso