IZMIR (Turkey) - Facing elimination in Game 2, Pinar Karsiyaka defended their home court with an 88-80 win over Lenovo Tenerife to force a win-or-go home scenario for Game 3.

Turning point: After it was only a five-point margin at halftime, Tenerife stretched their lead to as many as 12 points in the third quarter, but Karsiyaka held their ground and fought back.

A three-pointer by Amath M'Baye at the end of the third quarter cut Tenerife's lead to 65-63 heading into the fourth.

The final quarter was a tennis match that went back-and-forth between the two sides, as there were seven lead changes.

Once Karsiyaka went up 73-72, they held the lead for the rest of the game.

An alley-oop from Amath M'Baye to Alex Tyus put the exclamation mark on Karsiyaka's victory:

The five players combined for 83 of the team's 88 points.

This is only the sixth time that a team have had five players score 15 or more points in a single BCL game ever and the first time it happened since Tenerife did it against Dinamo Sassari in January 2021.

Colson also had 6 rebounds, 2 assists and 3 steals, while shooting 8-of-11 from the field. Tyus double-doubled with his 15 points and 10 rebounds on 7-of-14 shooting from the field.

M'Baye finished with 6 rebounds, 4 assists and 2 steals along with his 17 points.

Karsiyaka also shot an efficient 11-of-22 from three-point, while Tenerife only shot 12-of-35.

Tenerife snatched away eight steals, more than their average of 5.7 per game.

Bottom line: Sasu Salin led Tenerife in scoring with 20 points on 6-of-11 shooting from three-point.

The Finnish national is now the only player to have made 6+ shots from behind the arc in multiple BCL games this season.

Tenerife's Marcelinho Heurtas dished out 8 assists tonight and became only the fourth player to record 80+ assists in the BCL Playoffs/Play-Ins, as he now has 93 assists in that phase of the competition.

Karsiyaka have now forced a deciding Game 3 on January 20 at 20:30 CET, where Tenerife will be back at home in San Cristobal de La Laguna, Spain.

The winner will advance to the Round of 16 Group L. 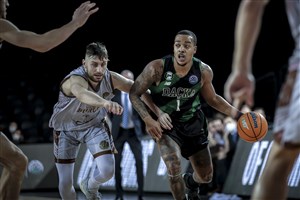 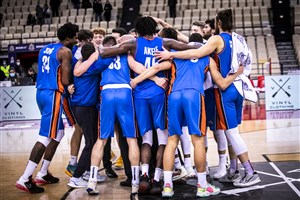