LUDWIGSBURG (Germany) - In the second game of the week between undefeated teams, MHP Riesen Ludwigsburg beat Lenovo Tenerife 80-69 and are now the only remaining team without a loss in Group A.

Ludwigsburg had a wire-to-wire victory, as they never trailed in the game and had a biggest lead of 16 points.

Tenerife's Kyle Wiltjer scored a game-high 24 points off the bench on 10-of-16 shooting from the field and 3-of-4 from three-point.

Turning point: Tenerife outscored Ludwigsburg 21-15 in the third quarter, even cutting Ludwigsburg's lead to 55-52 and looked to be gaining some momentum.

That was until Jordan Hulls then hit a three-pointer at the buzzer to stretch Ludwigsburg's lead back to 58-52 heading into the fourth quarter.

Hulls' buzzer beater was the second of the game, as Justin Simon hit a crazy shot at the end of the first quarter:

Game heroes: It was a complete team effort from Ludwigsburg, as five players scored in double figures.

Simon, Baehre, Radebaugh and Hulls combined to knock down eight of the team's 10 total threes.

Ludwigsburg forced Tenerife into 18 turnovers (while committing only six) and scored 16 points from those turnovers.

Bottom line: Ludwigsburg remain unbeaten at 3-0 and sit in first place in Group A.

The German club travels to face Banco di Sardegna Sassari (0-3) next on Nov. 8.

Tenerife are now 2-1 and in second place in the group. 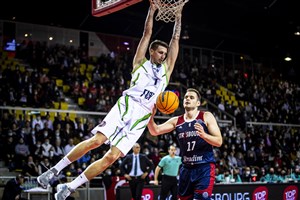 The C in BCL: Famous first wins for Polish and Ukrainian champions 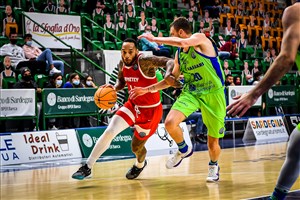