ISTANBUL (Turkey) - We're used to heroics by Akoon-Purcell, Bost, Trimble and Kravish. This time around, coach Ekrem Memnun found a hero in Kerry Blackshear Jr, who led Galatasaray Nef to their first win in the Round of 16.

The Turkish powerhouse led by 20 but had to settle for a 74-71 win over Hapoel U-NET Holon. While they stopped the bleeding from that 0-2 start, Galatasaray Nef players could not cover the margin from the first game, meaning Holon will finish above Galatasaray in case of a tie. Turning point: It looked like a one-way street as the hosts led for 36 minutes of the game, but a 14-0 Holon run in the third quarter made things interesting.

There were 10 lead changes over the last 12 minutes of the game, the last one coming when Melo Trimble made a triple to hand Galata a 67-65 lead.

DeVaughn Akoon-Purcell had four straight points to protect the lead, and Kerry Blackshear Jr knocked down a big triple to make it 74-69 with just over a minute to play.

Holon did not have another comeback in them, but at least they protected their nine point lead from the first matchup.

Game heroes: Akoon-Purcell had a dominant Regular Season, but struggled - at least by his standards - in the Round of 16. But after a couple of slow games for him, he was back to his best, already in the first half.

He had 13 of his 17 points before the break, more than in his previous two games in the Round of 16 (10 and 11 points, respectively), and Galatasaray were a +17 team in his 17 minutes on the floor across the first two quarters.

The forward was even more influential on defense, getting his personal season-high 5 steals to lead the charge from the defensive part of the court.

Where Akoon-Purcell stopped, Kerry Blackshear Jr picked up. The big man finished with 24 points, a season-high in all competitions for him, including big shots when Holon made their run and a big three-pointer to seal the deal. Stats don't lie: Galatasaray had 15 three-pointers in the first matchup, but it wasn't enough for the win in Israel. This time they were only 12-of-32 from deep, but did their part of the defensive side of the floor.

They forced 19 Holon turnovers, 16 of them also being Galatasaray steals, getting them +5 in points from turnovers, just enough to survive this one.

Bottom line: Galatasaray Nef finally got off the mark, climbing to 1-2, but not taking the tiebreaker over Holon which could be all important if they finish with the same record after six games.

Ekrem Memnun's men have a tough schedule ahead, they will face MHP Riesen Ludwigsburg in Germany on Monday, then travel 450 kilometers west for their game against JDA Dijon in France on Wednesday.

Holon are down to 2-2 now, even with another strong, high-flying game by Michale Kyser who had a team-high 16 points. Guy Goodes will also prepare his team for Ludwigsburg next week, followed by a home game against JDA Dijon on the final week of Round of 16.

"We dug a big hole in the beginning of the game and had to waste a lot of energy to come back in the game, and we were there. Unfortunately we lost the game, but I'm proud of my teammates for the way they fought to come back." - Rafael Menco, Hapoel U-NET Holon

"We started very bad, very slow, we let Galatasaray play their style of game, running, scoring, shooting threes. We knew that this is their style and we couldn't stop it. It took time to understand that this is a new game. I'm really happy for the second half, we basically won it 42-34, and especially the third quarter. But in a game where you have 19 turnovers, it's very tough to win. The only positive thing from this game is the points differential." Hapoel U-NET Holon head coach Guy Goodes

"We won, but we are not happy. This became a habit, we've been talking to players, every game we start aggressive, minimum ten games, and then the same thing happens. We can't control it, we give away double digit leads almost every game, then we get softer. Other team gets tougher, we can't run the play, then we panic. Same thing happened in Israel. Last weekend (in Turkey), same. We need to find a solution." - Galatasaray Nef head coach Ekrem Memnun

"That was a great bounce back for energy, we just played those guys two days ago, it was hard, but I think we adjusted pretty well. They space the floor really well, they have a lot of guys who've been there for a while so they know how to play with each other, that's why it was good to come out with this win." - Kerry Blackshear Jr 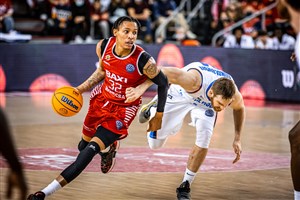