DIJON (France) - Robin Ducote only turned 21 years old, but the JDA Dijon guard has already learned a valuable lesson from disappointment. And he has turned that motivation in regular contributions in the Basketball Champions League.

Ducote has become a major part of Dijon's rotation and the shooting guard has helped the club reach the Round of 16 and put together a 2-1 record in Group I. He is averaging 3.6 points, 0.7 rebounds and 0.5 assists in more than 19 minutes a game in 11 BCL games.

"For a first experience in a European cup, I am lucky to have playing time," said Ducote, who played 39 minutes against Unicaja Malaga on Gameday 4 in mid-November. "I learn a lot when I have to defend Norris Cole from Unicaja or other talented players."

Ducote's watershed moment came on January 21, 2022 when he buried three three-pointers in scoring 13 points to go with 1 rebound and 1 steal against VEF Riga in a Gameday 2 makeup. That came a day after his 21st birthday.

That 83-79 victory in the Latvian capital was already Ducote's 11th BCL game. His first BCL appearance came on Gameday 3 of the 2020-21 season in a home game against ERA Nymburk. With then head coach Laurent Legname out due to Covid-19, it was assistant coach Frederic Wiscart-Goetz who called Ducote's name to enter the game.

"When you have to go on the court, you have pressure. But it was good pressure," said Ducote, who scored 2 points and had 1 rebound in 8 minutes of action.

Ducote ended up playing two more Regular Season games, picking up 3 points and 2 assists in a combined 13 minutes. And he played in nine games in the French ProA, collecting 6.6 points and 1.6 rebounds per game, including 19 points against Le Portel.

Playing for Dijon definitely has a different meaning for Ducote, who hails from Varois-et-Chaignot just outside the city in eastern France. He has been playing basketball since he was 3 years old as his father played the game, as did everyone in his family, as he said. And Ducote used to watch Dijon games as a youngster.

"I watched a lot of JDA games when I was young. Axel Julien and Mykal Riley were some of my favorite players. I had the chance to watch Axel from the stands and play with him on the court," he said.

Ducote has a special feeling playing for the club he grew up watching at the Palais des Sports.

"Two years ago I was supporting the team, and now I am on the court in front of my family, it's incredible."

Ducote repaid the club's commitment to him as he signed his first pro contract with Dijon this past off-season until the end of the 2021-22 season.

"I'm from Dijon, I've played here since I was 15. You can't refuse to play for the club that trained you," he said.

Learning from both Legname and Markovic

As good at times as he's been in the BCL, Ducote has been even more productive in the French ProA league. He is collecting 6.4 points, 1.2 rebounds and 0.8 assists in more than 20 minutes over 19 games including 24 points with 6 three-pointers against Nanterre 92.

Ducote said both of the head coaches he has experienced at Dijon have helped him in many ways to get where he is now.

"Laurent taught me a lot of things. He taught me to focus on defense and not to be afraid to shoot," he said of Legname, who left the club in the off-season after six years in Dijon.

And about current coach Nenad Markovic, Ducote said: "He expects me to play with intensity on defense, cut the passing lanes and take shots."

Ducote also has taken plenty of lessons from many of Dijon's veteran players. 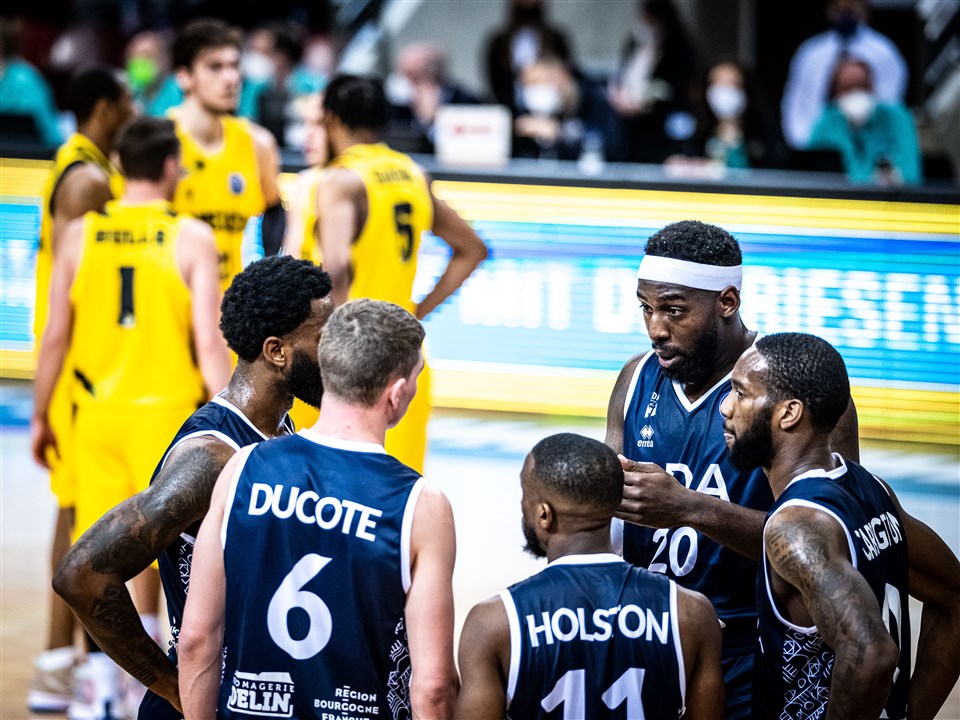 Ducote is learning from his veteran teammates

"I learn a lot watching and playing with David (Holston), Chase (Simon) and Khadeen (Carrington). I am defending Khadeen during training and I learn a lot by just watching him. Jacques Alingue also has a lot of experience, and he gives me a lot of advice on basketball in general," the youngster said.

Training camp with Hayes and Maledon

Ducote's talent was not only seen by Dijon but also the French basketball federation, which invited him to the U15 national team in 2016.

"The best early basketball memory was when I received the email to inform me that I was selected for the U15 national team. I was very proud," he said.

Ducote did not make the team at the FIBA U16 European Championship 2017, where France won the title with the likes of Killian Hayes and Theo Maledon. Ducote was, however, in France's training camp for the FIBA U17 Basketball World Cup 2018. And working alongside Hayes, Maledon, Malcolm Cazalon and co. opened Ducote's eyes. Ducote missed his chance to play with Theo Maledon and co. at the FIBA U17 Basketball World Cup 2018

"I did all the preparation with them and I can say that they are very strong. They can drive, dunk, shoot. You learn and you try to play like them," Ducote said.

But the guard was not chosen for the France team for the FIBA U17 Basketball World Cup, where they ended up reaching the Final and losing to United States but collecting the country's first medal at the event.

"My biggest disappointment was not having been selected for the World Cup in Argentina," he admitted. "I did all the preparation with the team, I tried very hard."

Ducote would get his opportunity to play for his country last summer as he played at the FIBA U20 European Challengers 2021 in Georgia.

"I made it last summer, so the work always pays off," said Ducote. "It's so special to sing the national anthem. You have feelings that you cannot explain." 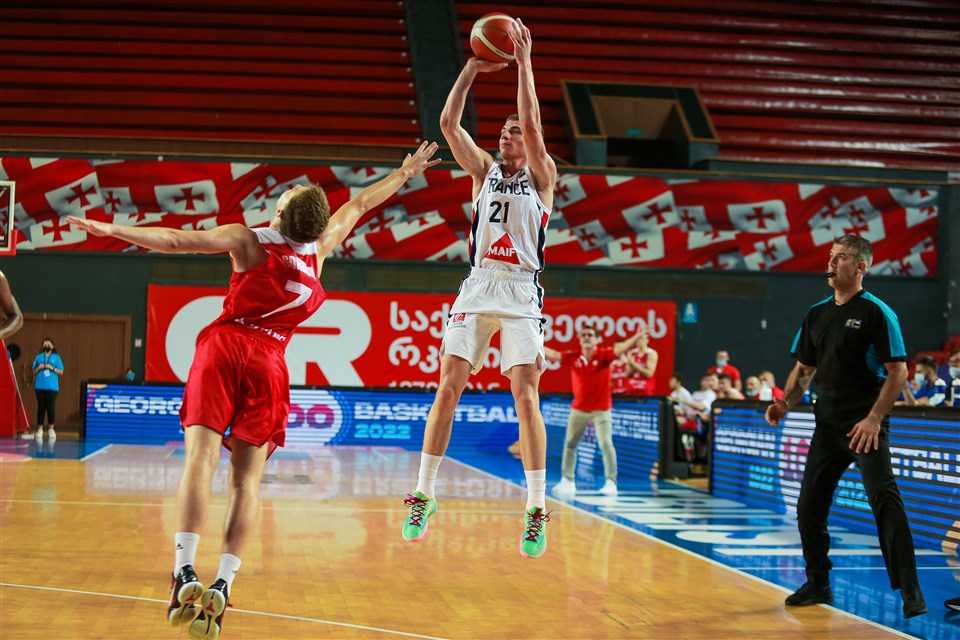 Ducote averaged 4.2 points, 1.0 rebounds and 0.6 assists in Tbilisi, including a big game against Bulgaria as he collected 11 points, 1 rebound and 2 assists in helping France win their Challengers group.

Last summer's experience with the France U20 team came after what Ducote called his biggest achievement, earning playing time with the Dijon pro team last season.

"I didn't play much at the start of the season. But the Covid-19 pandemic and Chase's injury allowed me to play some big games at the end of the season,” he said.

Ducote was part of the team that took third place at the 2019-20 BCL Final 8 tournament. And then in June 2021, he played a major role in Dijon reaching the French league final. He collected 7 points, 3 rebounds 2 assists and 1 steal in 22 minutes of an 83-59 win over Orleans in the Quarter-Finals.

Ducote then had 8 points in 12 minutes of Dijon's 79-68 Semi-Finals victory against AS Monaco. He chipped in 2 points and 1 rebound in 15 minutes in the Final - an 87-74 loss to ASVEL Villeurbanne.

Playing in the biggest games in France and then appearing on the national team stage has pushed Ducote to want even more.

That would give him some motivation from positive experiences after using his disappointments to get to a higher level. 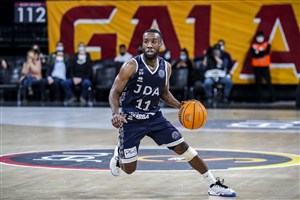 Only getting started: 36-year-young David Holston is MVP of February

From Qualifying Rounds to 3-0: Cluj wins battle of feel-good stories