The C in BCL: Famous first wins for Polish and Ukrainian champions

MIES (Switzerland) - Capacity crowd in the new Arena Ostrow carried the Polish champs to their first win of the season, keeping Hapoel Bank Yahav Jerusalem at bay. Meanwhile, Prometey needed to go on the road to get them off the mark, after losing two straight home games to start their first ever Basketball Champions League campaign.

Arged BM Stal Ostrow Wielkopolski are as ambitious as their name sounds, and the newly built arena is pointing the club into international waters. With an experienced man Igor Milicic behind the wheel, it was only a matter of time before they found a way to finish off their good games and pick up a win in Europe.

Wednesday, October 27 will go down in club history. After a couple of close call defeats to BAXI Manresa and Pinar Karsiyaka, both on the road by a combined 8 points, the first home game brought Arged BM Stal Ostrow Wielkopolski their first BCL win, 76-65 against another juggernaut and perennial contender Hapoel Bank Yahav Jerusalem.

"Very happy for the fans who attended this game in full capacity, they gave us extra energy. Finally, a win. It would not be unfair if were 3-0 now, but we are 1-2 and still fighting," coach Milicic said after the game.

Both him and Kobi Simmons praised the bench contribution.

"Proud of the guys! Defensively we picked it up, especially in the second half, and we made some good runs and we had a bunch of players step up, big time. Maybe not in the boxscore, but out there physically, providing things for us to win," Simmons explained it. Simmons scored 20 points with 10 rebounds also to his name, Michael Young had 14, James Palmer Jr and Trey Drechsel added 11 each, and James Florence did a bit of everything off the bench with 9 points, 5 rebounds, 5 assists and 0 turnovers.

Jalen Adams had 19 in a losing effort. Hapoel Bank Yahav Jerusalem suffered two close defeats at home, they are now down at 0-3, when they could've been at 2-1, easily.

Jerusalem were not the only team to lose two games at home. Prometey felt the same way as Aaron Doornekamp knocked down a game-winning triple for Lenovo Tenerife in Ukraine, and then MHP Riesen Ludwigsburg blew the champions of Ukraine out in the second game.

But hitting the road brought success for the young club. Prometey defeated Banco di Sardegna Sassari 87-79 in Italy, climbing to 1-2, sending Sassari to 0-3 and getting a huge chance to sweep the Italians back in Ukraine during the next Gameday.

"I'm happy we got our first win, this was really important for the team. Hopefully we can take this momentum going forward," Chris Dowe offered.

""It's a historic win for Prometey. It's a new club, only two years old, and the first win in the (Basketball) Champions League, and in Sassari - it's historic for the club," the playcaller repeated.

"We have two very difficult away games in Germany and Spain, but this win will keep us in the fight for the third or second position until the end. This is the toughest group in BCL, it's not just my opinion." 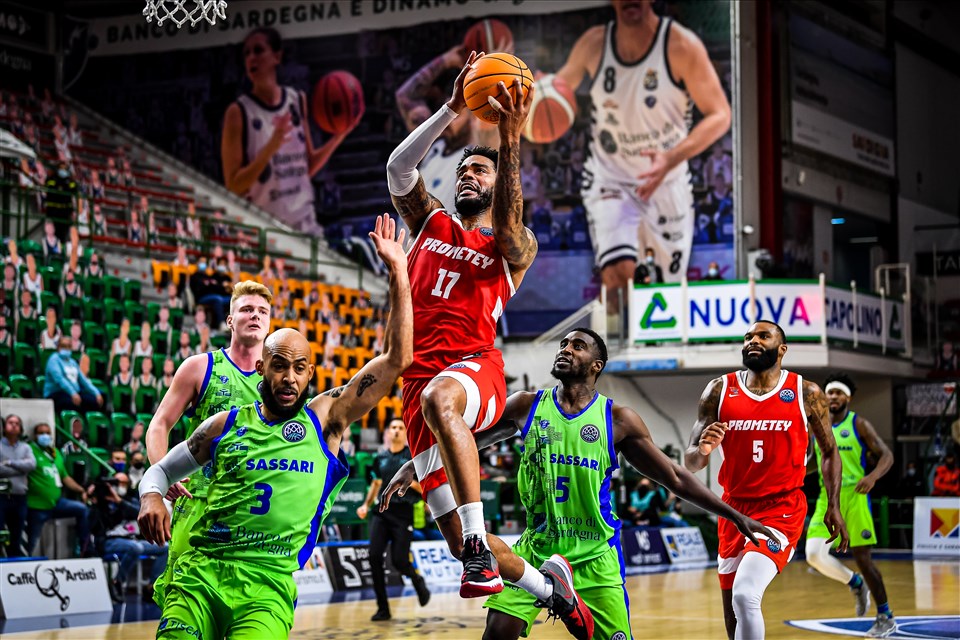 D.J. Kennedy had the most D.J. Kennedy stat line possible, with 17 points, 10 rebounds, 5 assists and 2 steals to lead the way. Dowe also scored 17, D'Angelo Harrison made it back to Italy with 16, Illya Sydorov scored 14, D.J. Stephens 10 for coach Ginzburg.

Sassari had six men in double figures, but now find themselves at the bottom of the group. Eimantas Bendzius led the way with 14 points and 7 rebounds.

Kyle Wiltjer was the only Tenerife player who had no trouble scoring, counting to 24. But the team struggled against the aggressiveness of Ludwigsburg, scoring 69 points, their lowest scoring game of the season in all competitions. Nymburk, Ludwigsburg, Galatasaray, Karsiyaka and Treviso players in the Team of the Month 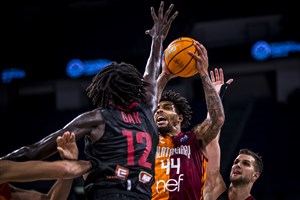