BILBAO (Spain) - For the first time in six seasons we have a Final with two teams from the same country. Given the strength of the Spanish ACB and the fact that the Final Four is being hosted here in Bilbao, maybe it shouldn't be a surprise that we have an all-Spanish celebration of basketball. But in the same breath, the fact that all-Spanish Finals in Europe are so rare possibly justifies any feeling if surprise.

How rare are they? Well, there have been 158 European Finals across all 8 different competitions. A Spanish club has won 38 of those but this is just the fourth time two Spanish clubs have met in the Final. The last time this happened was the 2018 Eurocup Finals between Unicaja and Valencia but that was a 3 game series. The last time with a single game Final was also in the Eurocup but back in 2008 between DKV Joventut and Akasvayu Girona. None other than Rudy Fernandez winning the MVP in that game.

The Aurinegros have the advantage when it comes to shooting the ball with an Effective Field Goal Percentage of 58 percent, whereas Manresa shoot 52 percent. Pedro Martinez's squad have the advantage on the offensive glass, rebounding 29 percent of their misses, at getting to the Free-Throw line, where they have a Free throw Ratio of 26.3 and also turning the ball over when they have a Turnover Percentage of 16.9 Percent Tenerife have recorded 24 percent, 22.4, and 17 percent for those three stats.

If the Semi-Finals are anything to go by, rebounding may be a huge factor. Manresa grabbed 55 rebounds, their most in a BCL game. This is also the first time that a team grabbed 50+ rebounds in a BCL Semi-Final. Tenerife outrebounded Holon 45-30 and were up 16-11 in offensive rebounds which led to 14 second-chance points.

🎬 @BasquetManresa has been all about The Flow this season, so let's call this video slow-flow instead of slo-mo.#BasketballCL #FinalFour pic.twitter.com/fmlBjdOz8V

According to the internet "A flow state, also known as being in the zone, is the mental state in which a person performing some activity is fully immersed in a feeling of energized focus, full involvement, and enjoyment in the process of the activity."

The way this team plays is all about flow and their Semi-Final was no different. Even if the flow of energy and focus was possibly more important than the flow of offensive actions that usually characterize this team. That isn't to say that we didn't see the Manresa brand of basketball. Their "Drag" offense has been their most effective all season and Dani Perez was up to his usual tricks and running the show at times.

Perez is able to push the ball up the floor and be comfortable making decisions at a tempo that nobody else can at this Final Four. The way he sets up screens and twists angles is like watching a pick-and-roll clinic on every possession. Sylvain Francisco doesn't let up on the tempo either when he's running the point. It will more likely be Joe Thomasson, Chima Moneke, Ismael Bako, or Yankuba Sima finishing the plays but the ability of Perez and Francisco to push the tempo and get Manresa into their offense will be key.

Of course, we have to talk about the MVP of the season. Before the tournament Eurohoops published an article about "The curse of the Basketball Champions League MVP Award". If anyone could break that curse it would be Chima Moneke.

Moneke plays with the type of energy and willpower that has so far proven impossible for any team to match up with this season. His 13-point, 13-rebound double-double in the Semi-Final was one of the best we have seen across all six seasons. His ability to put the ball on the floor and blow by players will be something Tenerife need to be very aware of. Very few wings, let alone forwards and centers have the foot speed to stay in front of Moneke on full burst. Then, even if you do find a way to contain him off the bounce, you still need to take on the impossible task of keeping him off the glass.

Since we're still in the awards ceremony mood, this one is Oscar worthy 🏆
🎬 @CB1939Canarias's path to the Finals in a mini-movie 🍿#BasketballCL #FinalFour pic.twitter.com/SRcCRcyV06

If this was the Oscars then there is little doubt that Marcelinho Huertas is currently the main nomination for the leading man at the Final Four so far. His mastery of the pick-and-roll was just too much for Holon to handle in the Semi-Final.

Marcelinho Huertas @Huertas09 scored all of his buckets in PNR action and finished with 17pts 9ast in the @basketballcl Final Four. He makes reads and decisions in PNR look so easy pic.twitter.com/bnK7mOvpoL

Sticking to the Oscars theme, Giorgi Shermadini would probably also be the leading nomination for the best supporting actor as well. Although, with these two, those two nominations could easily swap places by the time the Final is over.  Huertas had 17 points and 9 assists in the game against Holon. 5 of those assists were to Shermadini and the big Georgian only made one field goal that wasn't assisted by Huertas.

What's more, is that they did it when it mattered most, in the clutch, at the end of the game when Holon were coming on strong.

One man who was quieter than normal for Tenerife in the game against Holon was Sasu Salin with just 6 points on 1 of 6 from deep. Despite that, Salin has just recorded the best 3-point shooting season ever in the BCL with 60 (and counting) made 3-pointers and also become the holder of the most made threes in the six-year history of the competition. Straight after the half-time break in eth Holon game, Txus Vidorreta went to an action that has become synonymous with both the team and Salin. The play is designed to look like a "Spain" pick-and-roll with Salin setting a back screen for the roller but instead, they use that as a decoy and set a down screen for Salin to sprint off to the wing and shoot. We would be foolish not to expect Salin to get hot at least once this weekend and there is only one game left for him to do it...

The first matchup has to be between the two coaches. Pedro Martinez and Txus Vidorreta are without a doubt two of the very best Spanish tacticians in the game right now. They are both serial overachievers as well. Pedro steered Valencia to the ACB title and Txus was the primary catalyst that turned Tenerife into BCL champions. No doubt both will also have some tricks up their sleeves for this one so make sure you pay attention to the audio during timeouts.

After that, we need to be aware of Huertas and Fitipaldo against Perez and Francisco. The way both teams play is heavily reliant on creation from the pick-and-roll. How do Manresa cover Huertas in the ball screen? As we saw in the game against Holon, there doesn't seem to be a good answer to that question. Maybe they will look to switch at some point in the game but that leaves them wide open to the threat of Giorgi Shermadini inside.

And finally, the frontcourt battle will be huge when it comes to deciding the game. Manresa's frontcourt outran, outjumped, and outhustled Ludwigsburg in the Semi-Final. Can they do that to the likes of Shermadini, Guerra, and Sulejmanovic? The latter of those three names may end up seeing some extra time on the court at the center position if Tenerife try to match up for mobility. Then there is the question of who guards Moneke. If Tenerife look to play big and dominate with size, they can do so with Wiltjer who has been excellent all season and will present Moneke with some questions on defense with his shooting and crafty post moves. However, Wiltjer will also need to stay in front of Moneke taking it to the rack on the other end and so far we haven't seen a power forward who can.

The population of Manresa is officially 76250. It's probably going to look like a ghost town tonight as most of the city will be in Bilbao. That kind of atmosphere can get to any team but if any team has the experience to handle it then it's most probably Tenerife. No matter what the result is tonight, it's not going to pass quietly. 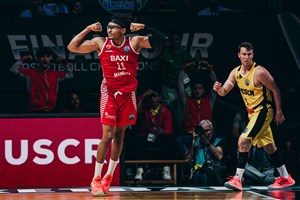 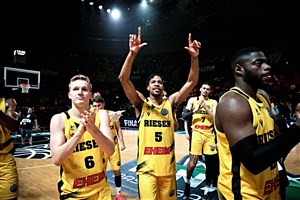