MALAGA (Spain) - It was another close game on Tuesday in the Basketball Champions League, and it seemed Unicaja were about to force the series-deciding Game 3. But Joe Thomasson hit the biggest shot of the season to send BAXI Manresa to the Final Four in Bilbao.

Manresa won the game 91-89, completing the sweep in the Quarter-Finals, ending Unicaja's season and now setting up a group viewing session of the MHP Riesen Ludwigsburg v U-BT Cluj Napoca matchup. The winner of that one will be on the other side in the Semi-Finals on May 6. Turning point: BAXI Manresa owned an 11-point lead, but a 12-0 Unicaja start to the fourth quarter got the capacity crowd in Malaga up on their feet, with plans for Game 3 already looming.

But Ibon Navarro's squad could not break away to an advantage big enough to secure a win before the final minutes. Instead, Pedro Martinez's team reacted with all of their depth - Dani Perez, Chima Moneke, Luke Maye, Sylvain Francisco, Ismael Bako all scored to set up the scene for the last 60 seconds.

Matt Mooney's three gave Unicaja an 89-86 lead. Sylvain Francisco responded with a triple of his own to tie the score. Mooney tried doubling down with another three-pointer, but missed, and a jumpball call got the ball back to Manresa with one last chance to win the series.

Depth thing again. Martinez went to the only big name who didn't score up until that point in the fourth quarter. But Joe Thomasson's game-winning mentality always comes through.

Thomasson took his time, found his spot and knocked down the most Joe Thomasson shot imaginable, giving Manresa a two-point lead with 1.0 left on the game clock.

Unicaja did not find a miracle shot to return, their maiden BCL season ends in the Quarter-Finals.

Game hero: Thomasson had 14 points, Francisco 17, but it was all about Chima Moneke for Manresa. The big guy had 17 points in 12 minutes of work in the first half, finished with 24 on 9-of-13 shooting with 5 rebounds and 3 steals also to his name.

Stats don't lie: Unicaja struggled from the line, they shot 12-of-17 compared to Manresa's 15-of-18. In a game where they shot 51 percent from the field, Unicaja needed to be more efficient from the charity stripe to force Game 3.

Bottom line: Jonathan Barreiro scored 21 points for Unicaja, but could not help his teammate Dejan Kravic get back to the Final Four. With Unicaja being eliminated, Kravic's run of three straight BCL titles - two with Hereda San Pablo Burgos, one with Segafredo Virtus Bologna - comes to an end.

"We didn't have a lot of stops in the second half. They started switching, so most of the time we were shooting, missing shots, so they took the advantage. But we have so much confidence on us, for us it was like, 'We've been in this situation in a lot of games, and we won those games.' For us, it was normal to be down by 5, 6, 7. We found good solutions on the offense, everybody did good." - Sylvain Francisco, BAXI Manresa

"Unicaja made a lot of adjustments after the first half. After the first game we played, they adjusted a lot of things on defense, they made it hard for us. They took the lead in the fourth quarter, and they made a lot of shots, but the surprising thing was that we were able to come back when we had everything against us. This is a game where we have to feel happy and proud of what we did. We're very proud, but our players want more. Our work isn't done." - BAXI Manresa head coach Pedro Martinez

"Tonight we lost to a team in the best shape in our league. They made a lot of shots, and those were often defended well, but they still made them. What I want to remember from this game is the great effort from my teammates, coaches... We gave it all." - Jonathan Barreiro, Unicaja

"We never gave up. This is the way that we want to finish this season. Honestly, I think that we deserved Game 3, but in 80 minutes, BAXI Manresa were better than us. They are one of the best teams not only in our domestic league, but also in the BCL, one of the main candidates to win the trophy." - Unicaja head coach Ibon Navarro Win or go home: Ludwigsburg book a trip back to Romania for Game 3 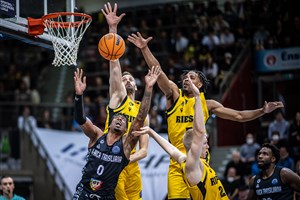