Blue Team is on offence. Blue 32 is attempting a 3-point field goal when a contact occurs and the referees call a personal foul on White 11 for pushing Blue 14, who was setting a screen. After a short communication, the referees decide that the basket is valid.

Article 10.3     The ball becomes dead when a referee blows his whistle while the ball is live.

Article 10.4     The ball does not become dead and the goal counts if made when the ball is in the control of a player in the act of shooting for a field goal who finishes his shot with a continuous movement which started before a foul is charged on any opponents’ player or any person permitted to sit on the opponents' bench.

Outcome: Correct decision from the referees. When the foul is called, Blue 32 has already started his act of shooting, so the ball does not become dead and the basket, if made, counts.  3 points are awarded to Blue 34, and the game will be resumed with a throw-in for the Blue team from the point closest to where the foul occurred. In this case, from the side line, with 14 seconds on the shot clock.

Red 39 penetrates to the basket. The referees call a personal foul to White 15 and awards two free throws to Red 39.

Article 15.1.3 The act of shooting is a continuous movement on drives to basket or other moving shots. The act of shooting begins when the ball has come to rest in the player’s hand(s), upon completion of a dribble or a catch in the air and the player starts, in the judgement of the referee, the shooting motion preceding the release of the ball for a field goal.

Article 25.2.1 A player must not touch the floor consecutively with the same foot or both feet after ending his dribble or gaining control of the ball.

Outcome: Correct decision from the referees. Red 39 had already started his act of shooting, so he will be awarded 2 free throws. Also, if the ball had entered the basket, the goal would not have counted as it was scored after a travelling violation.

OBRI 15-8 A1 with the ball in his hands drives to the basket for a 2-point field goal attempt. B1 fouls A1, after which A1 commits a travel violation. The ball enters the basket. A1’s field goal shall not count.  A1 shall be awarded 2 free throws.

During the last minute of the fourth quarter, the ball goes out-of-bounds and the referees award a throw-in to the Blue team. The referees become uncertain as to which player last touched the ball and decide to review the IRS. After the IRS review, the referees change their initial decision and give a throw-in to the White team with the remaining seconds on the shot clock.

Outcome: Correct decision from the referees. The initial decision was changed after the referees found clear and conclusive evidence that Blue 2 was the last player to touch the ball before it went out-of-bounds. Throw-in for the White team with 5 seconds on the shot clock.

White 23 misses a field goal. During the rebound White 8 taps the ball when he receives a personal foul by Black 3 for illegal use of hands. After a short talk, the referees consider that White 8 was not in the act of shooting and award a throw-in for the White team.

Article 15.1.1 A tap for a field goal is when the ball is directed with the hand(s) towards the opponents’ basket.

Outcome: Incorrect decision from the referees. White 8 was in the act of shooting and he should have been awarded 2 free throws. 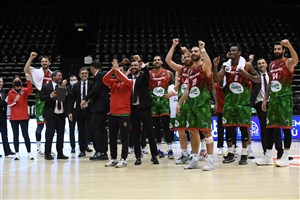 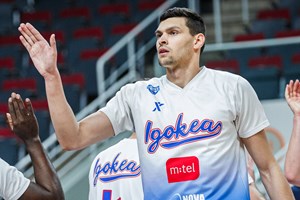