MIES (Switzerland) - If there was ever an appropriate time to make a good last impression, then the final week of action in the Play-Offs must surely fit the bill.

Players on all 16 teams in the Play-Offs, , even the ones who competed this week without any mathematical chances of reaching the Final 8, made the most of this last opportunity.

So there were a whole lot of great candidates, but we have singled out Tony Taylor of Pinar Karsiyaka, Jaromir Bohacik of SIG Strasbourg, Omar Prewitt of ERA Nymburk, Berkan Durmaz of Tofas Bursa and Kingsley Moses of AEK as the standout performers of Week 6 in the 2020-21 BCL Play-Offs.

Here's a closer look at their exploits in this week's games:

Taylor-made for the Final 8

😤 Champs find a way. @2cooltone matched his #BasketballCL career-high 21PTS in the 1st half alone, finished with 30PTS & 7AST to send @KSKBasket to Final 🎱! pic.twitter.com/m2uTi0BU8k

On Tuesday night, Pinar Karsiyaka needed not only to beat Happy Casa Brindisi but also to win by at least five points in order to advance to the Final 8, and nobody stepped out on the floor with a greater sense of urgency than former BCL champion Tony Taylor.

The Karsiyaka point guard tied his BCL career-high 21 points already by halftime and he finished with 30 points on 8 of 13 shooting, 7 assists and 2 rebounds for an efficiency rating of 30, which is also his new personal best in the competition. Taylor is now the seventh-leading all-time scorer in the BCL, with a total of 596 points.

Nobody can predict if Taylor can add a second BCL gold medal to his collection, after the one he conquered in 2019 with Virtus Bologna, but he has earned a shot at it since his amazing performance propelled Karsiyaka to an 107-88 victory and into the Final 8.

Bohacik gets his Final 8, at last

Jaromir Bohacik had 21PTS to send @SIGStrasbourg to #BasketballCL Final 8, including a pair of daggers that had "Czech, mate!" written all over them! 🤟 pic.twitter.com/jgjmnZdzy6

Jaromir Bohacik was instrumental in ERA Nymburk earning a berth in the 2020 edition of the Final 8 but he didn't get to actually play in the season-ending event in Athens, because he signed for Strasbourg.

His chance of making the 2021 edition seemed to vanish when SIG Strasbourg started off the Play-Offs on a 0-3 record, but the French team stormed back and it all came down to Wednesday's win-or-go-home battle with Turk Telekom.

Bohacik didn't want to go home, he wanted to go the Final 8, at last. The Czech international shot 8 of 12 from the floor and scored 21 points, tying his BCL season-high, and added 2 rebounds and 1 steal to help Strasbourg get a 91-81 win and the ticket to the big event. Better late than never, for both the French team and the Czech swingman.

Prewitt picks up the baton

🦸‍♂️ There's a new hero for @BasketNymburk every week... @OBoom_4 proved it with 21PTS to take down Dinamo Sassari on the road! #BasketballCL pic.twitter.com/1froimrF9S

ERA Nymburk are in a position to deliver lengthy lectures on the importance of the 'next man up' mentality as they proved over the last three games of the Play-Offs, and this week - both on on Tuesday and on Thursday - it was Omar Prewitt's turn to give the keynote speech.

Nymburk were missing Retin Obasohan and Jerrick Harding on both nights but you would be forgiven for forgetting these absences, as Prewitt took over scoring duties. The 26-year-old small forward had 21 points, 4 rebounds, 3 assists and 1 steal for an efficiency rating of 20 on Tuesday, and his team enjoyed a 91-73 rout of Dinamo Sassari on the road.

Two days later, Prewitt scored a BCL season-high 25 points and added 9 rebounds in a near double-double as Nymburk defeated Casademont Zaragoza 98-78 at home. The Czech champions clinched first place in Group L thanks to these two victories and Prewitt solidified his position in the top-10 in both scoring and efficiency (averaging 15.9 points and 16.3 rating per game), among players whose team qualified to the Final 8.

Durmaz bows out in style

Tofas Bursa's maiden BCL campaign came to a close on Tuesday as the Turkish team didn't make it to the Final 8, but a visit to the group winner is the perfect opportunity to show that you missed out on details and, perhaps, that you will be back stronger next time around.

Somebody as young as Berkan Durmaz, who just turned 24 years old in February, must definitely see things in that light and he proved it in Israel. The Turkish power forward scored a BCL season-high 18 points on 4 of 6 shooting from beyond the arc, adding 5 rebounds, 2 assists and 1 steal to lead Tofas to a 90-71 win over Hapoel Unet-Credit Holon.

Holon advance to the Final and Tofas don't, but the Turkish team's and Durmaz's future look bright, especially if you consider that he concluded his first BCL season as one of the best three-point shooters at his position, averaging 47.2 percent from downtown.

The time of Moses

AEK will miss out on the BCL Quarter-Finals for the first time since the inaugural season of the competition and some bad luck, especially with injuries, certainly played a role in that development.

One of those AEK players who missed time this season due to injury was Kingsley Moses and on Wednesday night he gave the Greek team's fans a glimpse of what could have been, by leading his side to a 79-78 comeback win over Group K winners Nizhny Novgorod.

The Nigerian big man finished with a BCL career-high 19 points as he shot an almost flawless 8 of 11 from the floor, and added 6 rebounds, 1 steal and 1 block for an efficiency rating of 21, a joint season-high. 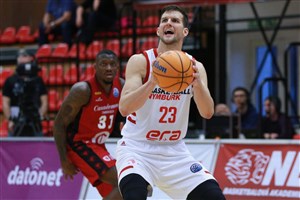 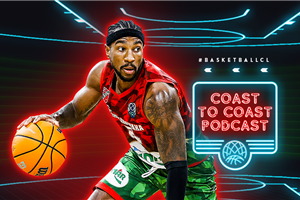