VILNIUS (Lithuania) - Augustas Marciulionis went old school this summer in his preparations for the 2020-21 season. The Rytas Vilnius talent spent the warm months in the woods outside Vilnius remembering the lessons he had learned on a blistering cold weekend in Chicago and working his way into a starting position in the Basketball Champions League at just 18 years of age.

Rytas entered the BCL for the first time with the expectations of going deep into the competition. And it was clear in the team's second game that the team believes Marciulionis will play an important role. The point guard missed the club's opening game against SIG Strasbourg and then started against Peristeri and picked up 4 points, 1 rebound, 1 assist and 1 steal in 13 minutes of action.

"This is the highest level that I have participated in yet. I'm excited to try this level and help my team as much as possible," said Marciulionis, who is making his professional debut this season after playing in the second division NKL last season

"I don't really have individual goals in the BCL. I just want to help my team win and earn as much playing time as possible," said Marciulionis, who collected 15.3 points, 3.6 rebounds, 5.8 assists and 1.9 steals for Rytas' second flight side.

He made the jump to Lithuania's top league this season and made his professional debut on September 19, playing 5 minutes against Juventus and hitting a three-pointer.

"The one thing that I will definitely remember from my debut game is the fans. Their support for me when I entered the court was something special," said the young talent, who has averaged 3.3 points, 0.9 rebounds, 2.0 assists and 1.2 steals in nine LKL games thus far this season - highlighted by picking up 9 points, 3 rebounds, 2 assists and 5 steals in his next game against Juventus just before the FIBA national team window break.

Marciulionis' early-season performance caught the attention of Lithuania senior national team head coach Darius Maskoliunas, who invited the playmaker to the Lietuva team for the FIBA EuroBasket 2022 Qualifiers in the recent November window.

"My first thought was – this is cool," Marciulionis said in advance of the camp. "I was really excited to see the list. Of course, there will be some jitters, because the national team is a big deal. We'll have a lot of experienced guys, a lot of good players. I'm going to be a rookie, and so young as well … On the other hand, it will be very, very interesting. It's a great feeling to get this chance from the coach, probably a bit in advance with the future in mind."

Marciulionis ended up not playing in either of the games against Denmark and Belgium, though he was on the roster for the upset loss to Denmark. But it was the next step on the path to prominence.

The name will always be there

Actually, there is always a certain level of prominence wherever Marciulionis goes - and solely because of his surname. Augustas is the son of the Lithuanian basketball legend Sarunas Marciulionis, who won the gold medal at the 1988 Olympics with the Soviet Union and then was one of the leaders of the reborn Lithuanian national team that claimed bronze at the 1992 Olympics as well as silver at the FIBA EuroBasket 1995, where he was named MVP.

Sarunas retired from the NBA nearly five years before Augustas was born in 2002 and it took the younger Marciulionis a while to realize just how special his father actually was.

"I didn't realize it until I think I was 6 or 7, when I started to learn about basketball and its history," said Marciulionis, who started playing the game at 6 and began at his father's academy. "I fell in the love with the game really fast"

But Augustas looked outside the family in terms of basketball role models, listing Chris Paul, Magic Johnson, Steph Curry and Brandon Jennings as the point guards he looked up to growing up in the game.

"The first three players are some of the all-time greats at my position, so I can learn a lot from all of them," he said.

But his cheering for Jennings he says comes from him wanting to be a little bit different.

"It was back in 2015 or so. I wanted to choose my favorite player because all of my friends had one. But I didn't want to choose a superstar player which everyone roots for. So I really liked how Jennings played at that moment. He was playing in Detroit and was one of the top seven or eight point guards in the league. But sadly injuries ruined his career later," Marciulionis said.

Still, Marciulionis always had his father. And he said he still gets a lot of help from his Sarunas - a member of the FIBA Hall of Fame and Naismith Memorial Basketball Hall of Fame.

"We watch my games and NBA games, and he tries to tell me useful things that I can use on the court," he said. "We are both guards. He was more of a scorer and physical player, while I'm more of a pass-first playmaker."

Sarunas Marciulionis was well-known for his strength at the guard position, which is one trait that Augustas wishes he had from his father.  And that lack of strength was one of the main reasons Marciulionis took to the woods this summer.

But it also goes back to his participating in the 2020 Basketball Without Borders Global Camp at the NBA All-Star weekend in Chicago in February. Marciulionis was selected among the best players in the world from outside the United States to take part in the weekend of festivities and camp.

"I learned that there is a lot of work to do for me," said Marciulionis about the camp, where he noticed once again his lack of strength and athleticism on the world level - though he excelled as a playmaker and received great tips from the NBA coaches and players at the camp.

With the COVID-19 pandemic shutting down the world, including basketball, and Marciulionis flocked to the woods to work on his game and body.

"I was practising outside, mostly in the woods. I worked on my body a lot and I'm happy that I spent the quarantine time wisely. I also gained a few kilograms," he said.

The pandemic cost Marciulionis a chance to participate in two major competitions. Rytas' youth team won the Adidas Next Generation Tournament Kaunas event to qualify for the ANGT Finals at the EuroLeague Final Four in May 2020 in Cologne, Germany, which was cancelled. And the FIBA U18 European Championship 2020 was postponed, which is the qualifying tournament for the FIBA U19 Basketball World Cup 2021 - both of which were for Marciulionis' 2002-born generation.

"There was a lot of frustration because in the ANGT we had a very good team, and our goals were big," said Marciulionis, who was Rytas' captain and earned a spot on the ANGT Kaunas All-Tournament Team.

"Also playing at the FIBA U18 European Championship and competing against the best guys of your generation is a big stage to prove yourself and play for your country. But you have to deal with it and look forward," he said.

Rytas instead of NCAA

The pandemic also at least postponed Marciulionis' plans to attend college and play NCAA basketball in the United States.

"I was interested in college basketball, but in this current situation, I wanted the safe option to play for my hometown team, and I'm very happy with this decision."

Marciulionis is a Vilnius native and Rytas was always his favorite team as well. And he feels well served by being with the club. One example is the opportunity to learn from Andrew Goudelock, who has played in the NBA playoffs, the 2014 EuroCup final and 2015 EuroLeague Final Four while lining up for storied franchises like the LA Lakers, Fenerbahce, Maccabi Tel Aviv and Olimpia Milano.

"First of all, Andrew is an amazing player with elite scoring skills. But what amazes me even more is his personality, his leadership. He is a leader on the court and off the court. He is a humble and friendly person," Marciulionis said.

Playing alongside the likes of Goudelock has made things easier for Marciulionis, as does the coaching staff not heaping much pressure on the youngster.

"The coaches expect me to bring in a lot of energy on both sides of the floor," he said.

Pressure is always there just because of that last name that Augustas bears on his jersey.

"It gives some pressure, but I'm just playing basketball and trying to improve every single day," Marciulionis said.

There are no workouts in the woods that can lessen that pressure. 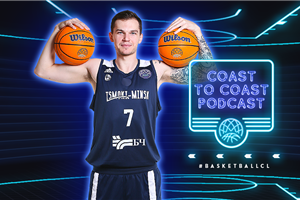