OOSTENDE (Belgium) - There are advantages and disadvantages to playing for the biggest clubs in Europe. While Mario Nakic got to grow up around some of the continent’s best players coming up through the Real Madrid youth ranks, he did not get a lot of playing time. In the end, it was the chance to continue developing while on the court and playing in the Basketball Champions League that brought Nakic to Filou Oostende.

Nakic, Real Madrid and Oostende agreed last off-season that the 19-year-old would be best served if left Spain to play on loan in Belgium under the watchful and willing guidance of Oostende head coach Dario Gjergja.

"It was important for me this year to go somewhere to play on loan so I wanted to go to a place where I would have freedom in my game and where I can improve and Oostende was one of my first choices. Mostly because of coach Dario and the way he works and helps young guys," Nakic explained.

Gjergja not only has guided Oostende to nine consecutive Belgian league crowns - as well as six Belgian Cup trophies in that stretch - he also built up a reputation as a coach willing to work with youngsters and give them a chance to play.

Nakic actually had a strong connection with Sylla as the two played for many years in Real Madrid's youth system before Sylla signed with Oostende before the 2019-20 season.

"He helped me a lot when I came here, and he said that it's great here, that young guys are working hard with Coach Dario and that he lets them play and helps them a lot," Nakic said.

That willingness from Gjergja to help young players fits well with Nakic, who has a strong desire to work on his game and get better.

"Hard work is the only way you can achieve something in life. Whatever it is you're doing, whether it's sports or business or whatever, that's the only way to succeed," Nakic said.

"He is old school, so he believes in hard work and humbleness. The more I'm doing that the more I understand why is he saying that, because it all pays off, and every day you try to be better so you don't have any regrets at the end of the road. You know you gave the best you could and that's it."

In addition to life lessons off the court, Nakic also learned plenty of things about basketball from his father. Ivo Nakic played from 1984 to 2001 and played alongside Drazen Petrovic at Cibona Zagreb and won two European Champions Cup titles in 1985 and 1986. Nakic helped teammates such as Vlade Divac, Predrag Danilovic, Aleksandar Djordjevic and Zarko Paspalj in winning the 1989 Korac Cup with Partizan, and Nakic celebrated a third European Champions Cup crown with Partizan in 1992 with Danilovic and Djordjevic.

Mario Nakic was born in 2001 in Belgrade, and he said it took a while for him to realize just how good his father was.

"To be honest, the older I get the more I realize how good he was because you hear all his ex-teammates and friends talking about how good he was and all that. But you are young and you don't understand it in that way. Now I’m starting to realize how much he accomplished in his career in that time with so many great players in that era," Nakic remarks with a laugh.

When asked what basketball skill from his father he wishes he could have, the younger Nakic said: "Oh definitely his shot. I mean if my shot was as half as good as his I would be happy. (Laughs) But hey, thank god he installed in me that work ethic and love for the game with which I go every day to the gym and work on all the things I need to improve."

Stars to learn from

The younger Nakic didn't just have his father from which to learn. During his five years at Real Madrid, there was a seemingly never-ending list of superstars in European basketball walking along the same halls in the club.

"So many great players with so many trophies and titles won. I had the pleasure to play with a few players that are for sure part of the best generation in Spanish history like Sergi Llull, Rudy Fernandez and Felipe Reyes. Every player helped me a lot - Sergi, Trey Thompkins, Jeff Taylor, Rudy, Fabien Causeur, Edy (Taveras). I mean I could name the whole roster, but yeah I'm definitely grateful for every advice I got from them," Nakic said.

Nakic was still a couple of weeks shy of his 17th birthday when Real Madrid head coach Pablo Laso called on the youngster to make his Spanish ACB league debut on May 24, 2018 against Gran Canaria.

"It was really an exciting and happy moment for me because I wasn't expecting it to happen to be honest. I was very nervous during the game and I remember Edy Tavares giving me advice, telling me it's going to be alright, you're going to do great, just have fun. And that helped me a lot. So when I got into the game, everything went away and I felt great and confident," said Nakic, who had 2 points and 1 rebound in 6 minutes in the game.

Just like Oostende, Real Madrid have also built up a reputation of giving their top youngsters a chance to play with the pro team - albeit not to the same level as the Belgian club. Luka Doncic famously played a leadership role in helping Real win the EuroLeague at 19 years old in his third season as a full-time pro. Nikola Mirotic debuted in the Spanish league a couple of weeks after his 18th birthday. Usman Garuba and Dino Radoncic were both just 16 years old when they debuted in the Spanish top flight and Boris Tisma had just turned 18 for his debut.

"It helped me a lot, like I think it helped them. I got to learn a lot, but mostly also off the court - like how much you need to take care of your body and what it's like to be a professional in every way possible," Nakic said.

He ended up playing eight ACB games during the 2019-20 season and even debuted in the EuroLeague on February 20 against Fenerbahce.

"During that period we had some trouble with injuries, so I was traveling with the team. I had been on the roster a few times for some EuroLeague games but never got a chance to get in to play. So that time in Istanbul I wasn't really expecting to play because we were playing a great opponent like Fenerbahce. Luckily, we started the game well and played good and finally I had a chance to get in," said Nakic, who hit both of his shots for 4 points. "I was nervous a little bit, but also ready. I couldn't wait to step on the court and I think I did good."

That was not the first time that Nakic had been present at a big event. He participated in the 2018 Adidas Next Generation Tournament Finals, which took place during the 2018 EuroLeague Final Four in his home city of Belgrade.

In the group stage of the U18 ANGT event, Nakic and Real Madrid lost to eventual champions Rytas Vilnius, missing out on reach the ANGT Championship Game. Nakic and many of his teammates were still a year younger, meaning they would have another chance in 2019 at the ANGT Finals at the EuroLeague Final Four in Vitoria-Gasteiz.

"It was definitely the main goal of the season. So we weren't going to let the same thing happen this time," said Nakic.

Nakic and Real Madrid took the three group games by winning margins of 43, 26 and 30 points - with the middle victory coming in the revenge game against Rytas - before meeting up with Mega Bemax Belgrade in the title bout. Nakic made sure it wouldn't be much of a game with championship game record-breaking 33 points and 41 index rating as well as 8 rebounds and 4 assists in a 95-76 rout for the club's first ANGT title since Luka Doncic won the crown in 2015.

"We wanted that more than anything because that was the stamp for the perfect season. We knew we were favorites but at the same time we wanted to beat everyone by 30 and show why we are the favorites," said Nakic, who was named MVP as he averaged 17.3 points, 6.8 rebounds, 4.8 assists and 1.5 steals. Nakic otherwise played in Real Madrid's reserve  fourth division EBA team the rest of his time with the club. That needed to change for him to take the next step. And it is happening in Belgium.

His first professional game for Oostende was actually the team's Group H opener against Darüssafaka Tekfen as the start of the Belgian league was delayed due to the Covid-19 pandemic.

"I was very excited (about playing in the BCL). I saw a lot of good teams coming to the Basketball Champions League and honestly that's what attracted my attention even more. I think it's a very good league that will get better year after year," he said.

Nakic collected 5 points, 1 rebound and 1 assist against Darüssafaka and then picked up 8 points on 11 shots to go with 3 rebounds and 3 assists in 29 minutes in the second game against reigning champions Hereda San Pablo Burgos.

"Every game was great for me, no matter how much I played because we're lucky that we have some great teams in our group: definitely two of the competitors for the title - Burgos and Brindisi. So you learn a lot from every game," Nakic said. "The Burgos game was a great experience for me playing a tough team with very experienced players and a team that's doing great in the ACB league. It was a great game for me to learn from my mistakes and gain experience on the court both offensively and defensively."

The Burgos game came after he exploded in his Belgian league debut with 25 points, 9 rebounds and 2 assists in 32 minutes against Charleroi.

"I think I had a pretty decent game. I was feeling good. I got comfortable and getting to my spots the whole game. I also tried some things I was working on in practice, and we won so it was great."

"It's been great so far minus the injuries. Everything was like I imagined. A lot of work, dedication, learning and I think I improved a lot and also have a lot more to improve on. It's great knowing I have more room to improve and that I can be even better and never satisfied."

Injury forces him to sit

Nakic is currently out with an ankle injury, which forced him to miss Oostende's Gameday 8 contest against Happy Casa Brindisi.

"It's an injury that's been following me since August. It's been troubling me the past five months, so know I'm just determined to make sure I get my ankle right and healthy."

Make sure that he gets to a point where he's ready and able to continue using the opportunity he has to develop. 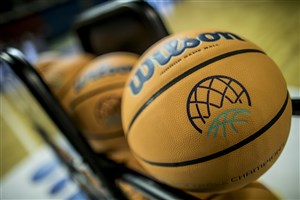 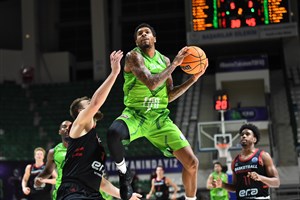