SZOMBATHELY (Hungary) - Falco Szombathely's Zoltan Perl has been named MVP of the week for Gameday 7, becoming the first Hungarian-born player to earn this accolade in Basketball Champions League history.

I've never thought about individual things, I just want to play well and help my team to win as many games as possible - Zoltan Perl

Jarrod Jones, who was born in the USA but is a naturalized Hungarian, had claimed the weekly MVP honor on Gameday 1 of the 2017-18 season.

Perl was born in Szombathely and started his career at Falco, so he has a very special bond with the BCL debutants who have turned heads in the competition.

"To be honest, I've never thought about individual things, I just want to play well and help my team to win as many games as possible," the Falco winger told championsleague.basketball.

"I’m happy [to be named MVP] but I don’t feel more responsibility because of this. We just have to keep our focus and continue working hard, like we have done until now."

The 24-year-old Hungarian international was certainly laser-focused on Wednesday night when Falco were playing host to Neptunas Klaipeda in Group D action, as he came off the bench and got the hot hand almost immediately.

Perl scored 21 points in just 21 minutes of play on 9 of 12 shooting from two-point range and added 7 assists and 5 rebounds to register an efficiency rating of 26 and guide Falco to an eye-popping 97-73 win over the formidable Lithuanian team.

"I was very motivated to come on the court. I saw that my team was already playing really well, so I just wanted to bring some extra energy to the game," Perl said.

Our fans always create a fantastic atmosphere, in which every opponent finds it hard to play - Zoltan Perl

"After my second shot went in, which was also a little bit lucky, I felt that it can be a good day. It was important that I could get into my rhythm quickly."

Just like the Hungarian champions, Perl is also making his BCL debut this season. He just missed out last season, when he was playing for Movistar Estudiantes and the Spanish team fell in the second Qualification Round.

There is nothing like your first time, they say, and the exuberant Falco fans certainly prove that to be the case, as they have helped their team to turn Szombathely into a fortress, picking up three comfy wins in as many home games so far in Group D.

"On our homecourt, we always play with really big energy, with emotion and with great aggressiveness," Perl said.

"Our fans always create a fantastic atmosphere, in which every opponent finds it hard to play.

Falco and their amazing home crowd have earned everyone's respect in the competition, but Perl is cautious not to get ahead of himself when it comes to the Hungarian team's chances to reach the Play-Offs.

They currently stand at 3-4, but the margins are so wafer-thin in Group D that three teams are tied in second place on a 4-3 record and three others, among them Falco, are tied in fifth.

"We can be satisfied with what we've done so far, but we're still only halfway through the Regular Season, so there are still lot of games left," the Hungarian winger said.

"We have the confidence that if we can keep playing like this we could have a chance to qualify." 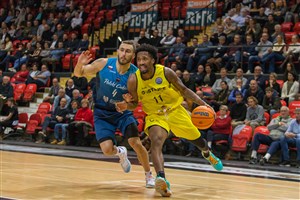 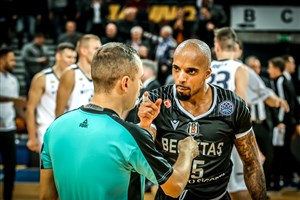