Blue 32 attempts his last free throw. The ball touches the rim, bounces and is then tapped away by Yellow 43.

Article 31.2.4 states that an interference occurs when a defensive player touches the ball while the ball is within the basket, thus preventing the ball from passing through the basket.

Article 16.2.1 states that after the ball has touched the ring on a last free throw and is legally touched by any player before it enters the basket, the goal counts 2 points.

Outcome: Incorrect decision from the referees. The ball was illegally touched by a defensive player as part of it was within the basket and below the level of the ring (basketball interference during a free throw). 1 point should have been awarded to the Blue team.

White 1 drives to the basket and passes the ball off to his teammate White 21. Defender Black 21 looks for a contact and flops, pretending to have been fouled. White 21 dunks and the referee calls a technical foul for flopping on Black 21 and awards the basket.

Outcome: Correct decision from the referees. Defender Black 21 was in legal guarding position but White 1 didn’t charge him. This is an excessive fake for flopping and was penalized with a technical foul.

The Article 10.4 states that the ball does not become dead and the basket counts if:
1. Made when the ball is in control of a player who is in the act of shooting for a field goal.
2. Who finishes his shot with a continuous motion which started before a foul is charged on any opponent player.

Black 7 is trying to play a central pick’n’roll or to set a screen for his teammate Black 11 to get an open shot. Finally, Black 11 attempts a 3 point shot and the referee calls an act of shooting foul to White 0.

Article 33.7 states that for a screen to be legal, the player setting the screen must be stationary inside his cylinder and have both feet on the floor.

Outcome: Incorrect decision from the referees. Black 7 committed a team control foul for blocking (moving screen with one foot in the air when contact occurred) and the ball should have been awarded to the White team for a throw-in at the place nearest to the infraction.

White 0 drives the ball and tries to lay up the ball. Before he releases the ball there is a contact with defender Black 12.  The referee calls a team control foul (charge).

Article 33.4 states when guarding a player who controls the balls, the elements of time and distance do not apply. The defender occupied the spot with a legal guarding position (both feet on the floor and facing his opponent) before the shooter jumped off the floor, so he didn’t violate his right to land.

In addition, the defender was not in contact with the no-charge semicircle, so this rule doesn’t apply. Finally, contact occurred on the torso of the defender, so this player is considered as having been at the place of contact first.

Outcome: Correct decision from the referees. This is a charging foul.

We have two clips in the low post play.

In the first, we can see a match-up between offensive player Blue 21 and defender White 00. First, Blue 31 extends his arms outside his cylinder restricting the freedom of movement of the defender to occupy a free spot on the court to deny the inside pass. Then, both players push each other trying to get the best position. Finally, Blue 21 hits with his arm in the face of his opponent and the referees call a team control foul.

On the second clip, we can see physical game in the same position between the same players. The referee calls a foul to the defender.

Outcome: Incorrect control and criteria in low post play. Post play is an important part of the game and it’s essential to keep it under control at all times. It can be physical within the limits set by the rules but not rough or excessive. The referees have to pay attention to these match-ups to avoid roughness or over-physical play. In order to do this, the criteria must be clearly set from the beginning and then followed consistently throughout the game. 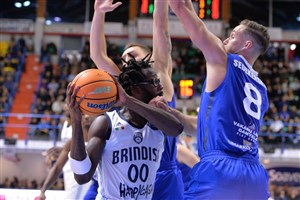 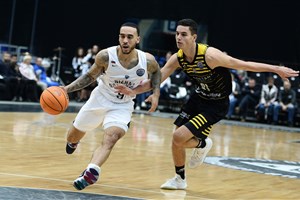