During the second overtime, Offensive player Red 11 steps into the restricted area. Defender Blue 7 gets close to him and uses his shoulder to hit his opponent with undue roughness from the back.

According to the article 37.1.1, an unsportsmanlike foul is a player contact foul which, in the judgement of an official is an excessive, hard contact caused by a player in an effort to play the ball or an opponent. And following the article 38.1, a disqualifying foul is any flagrant unsportsmanlike action by players, substitutes, coaches, assistant coaches, excluded players and accompanying delegation members.

Outcome: Incorrect decision from the referees. The contact created by Blue 7 meets the criteria to be called as unsportsmanlike and, if the referees consider it to be flagrant, Blue 7 can be disqualified.

Red 44 steals the ball, establishes a new team control and makes a long pass to his teammate Red 21. White 11 creates an illegal contact with his body against Red 21 as he receives the ball. The referees call a personal foul. After sharing information, the crew chief decides to use the IRS to decide whether the personal foul meets the criteria to be upgraded to an unsportsmanlike foul (article 46.12 – bullet 3)

Article 15.1.3 – A continuous movement in the act of shooting begins when the ball has come to rest in the player’s hand(s) and the shooting motion, usually upward, has started.

Outcome: Correct decision from the referees. The act of shooting had not started yet. This contact meets the criteria to be called as unsportsmanlike.

With 8 seconds to the end of the game, the ball leaves the court and the referee calls an out-of-bounds giving the ball to the Purple team. At the same time, the scorekeeper notifies the officials that this team have requested a time out.

Article 46.12, bullet 2 - The crew chief is authorised to use the IRS when the game clock shows 2:00 minutes or less in the fourth period and in each overtime, to identify the player who has caused the ball to go out-of-bounds.

After checking the video, the crew chief decides that it was player Purple 5 who last touched the ball before it left the court, so they decide that the throw-in will be for the White team.

Outcome:  Correct decision from the referees. Moreover, the time out shall not be granted until the review has ended, and the coach may decide to cancel the time out request, since the restarting of the game has changed completely.

White 11 receives a pass and goes to the basket. In his movement, he jumps off the floor over the semi-circle line and attempts a shot while airborne. Defender Red 18 occupied a position on the court before the offensive player left the floor and a contact occurs. The referee calls a charging foul to the offensive player.

Outcome: Incorrect decision from the referees. All the above conditions were fulfilled so there should have been no call.

The Purple team are playing a half-court offence. As the ball crosses to the opposite side, player Purple 8 makes a weak-side cut trying to receive a pass on the wing and he is guarded by White 8. The Purple team attempt to set a double screen, trying to create an open shot for Purple 8, who finally scores a three-point shot.

Article 33.7 – Illegal screening is when the player who is screening an opponent did not respect the elements of time and distance of an opponent in motion when contact occurred (to take a position so near and/or so quickly in the path of a moving opponent that the latter does not have sufficient time or distance either to stop or to change his direction).

Outcome: Incorrect decision. A team control foul for illegal screening should have been called. 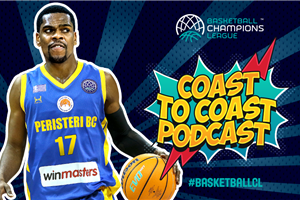