JERUSALEM (Israel) - TaShawn Thomas has been named Gameday 13 MVP, becoming the first player in the 2019-20 Basketball Champions League season to claim the accolade on two occasions.

The Hapoel Bank Yahav Jerusalem power forward earned the distinction for the first-ever time in his career three weeks previously, for this stellar performance on Gameday 10 that was rated at 32 in terms of efficiency.

The 26-year-old American managed somehow to raise the bar even higher on Wednesday. Thomas paved the way for Hapoel's 96-91 dramatic win over San Pablo Burgos by registering a BCL career-high efficiency rating of 38 as he finished with a BCL career-high 27 points and a season-high 4 blocks, adding 6 rebounds and 4 assists.

Hapoel Bank Yahav Jerusalem outlast San Pablo Burgos! It was a thriller, but the hosts prevailed, winning their 10th #BasketballCL game of the season.

"It feels great to have won MVP twice this season, I didn't get any last year or the year before (Thomas played in the BCL with UNET Holon in the 2018-19 season). It's just an honor to be paying some great basketball on a great team," the two-time weekly MVP told championsleague.basketball.

I feel that I can sustain this level of play until the end of the season, I just need to go out in every game and play my heart out and everything else will take care of itself - TaShawn Thomas

"I don't think the team should buy me dinner or come up with a new nickname for me or do anything of that sort to celebrate," he added with a laugh. "As long as we keep playing some good basketball, that's all I can ask for."

Thomas has now posted an efficiency rating of 20 or higher during a truly impressive eight-game stretch. To simply say that he is going through a purple patch would be an understatement.

"I definitely feel that I am playing the best basketball of my professional career right now. But to be honest with you I am not satisfied, I feel like I have a lot more to offer and I am just going to continue to work for the team," he said.

"I feel that I can sustain this level of play until the end of the season because it's about mental preparation, I just need to go out in every game and play my heart out and everything else will take care of itself."

We are proud of what we have achieved so far but we still have many games to play, we're far from done - TaShawn Thomas

Thomas, and Hapoel as a team, offered further proof of their remarkable mental focus and tenacity this season on Wednesday night. The win was not as valuable to the Jerusalem side, who were seeking to lock up first place in Group B, as it was to Burgos, who were hoping to secure their place in Play-Offs.

Yet when Thad McFadden caught fire from behind the arc in the final five minutes and the Spanish side turned a 10-point deficit into a 4-point lead in the blink of an eye, Hapoel didn't throw in the towel. On the contrary, the hosts used the final 100 seconds to turn the tables on their visitors once again and walk away with the victory.

"I believe what pushes us to play to the end, like we did on Wednesday, is the sort of team we have," Thomas said.

"We've been doing it a lot this year, either having to make comebacks or having a team come back on us and being able to win the game at the end.

"I definitely felt we had to protect home court, nobody wants to lose at home. It makes the fans happy and we also knew a win would secure us first place in the group, so we needed to get it."

I am staying humble, I am trying to stay ready for the next game, that's the only way we get a shot at our goal - TaShawn Thomas

An advantage of finishing first in your group is that you get to play a - theoretically - weaker opponent in the Round of 16. Thomas doesn't see it that way though.

"We are feeling more confident now that we have secured first place, but we still have to go out there and play our best no matter who we're playing," he said.

"We're not going to look past anybody, we will take it one game at a time until we reach or goal."

When Thomas earned Gameday 10 MVP honors, he stated that for Hapoel's main goal for the season was to reach the BCL Final Four and get a shot at the title.

"It's the same, we are proud of what we have achieved so far but we still have many games to play, we're far from done," he said.

"We were in a good place last year, but things didn't turn out the way we wanted.

"So I am staying humble, I am trying to stay ready for the next game, that's the only way we get a shot at our goal. 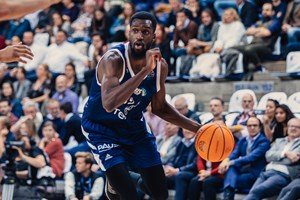