"It means a lot to me, coming from where I come, to represent my country like that," Sant-Roos told championsleague.basketball.

"But [being the first Cuban weekly MVP in the BCL] doesn't add any extra pressure, everywhere you go and play the pressure is the same, the team always wants the best from you."

On Wednesday, the versatile forward posted one of his trademark all-round performances to steer the Athens yellow-blacks to a 91-78 victory at home over Hapoel Bank Yahav Jerusalem, in a battle of powerhouses for sole leadership of Group B on the final day of action for 2019.

Lucky number 7⃣! @aekbcgr win their seventh straight game in all competitions, they are 13-1 in last 14 games in Greece and the #BasketballCL 💪

In front of a jubilant 10,000-strong crowd in the OAKA Olympic Hall in Athens, Sant-Roos finished with 18 points, 7 rebounds and 6 assists and registered an efficiency rating of 25.

If you guys want to call me something, I prefer you call me Loco. Iron Man is definitely not for me - Howard Sant-Roos

As you would expect from watching his play on the court, the altruistic forward won't even take credit for leading his team in scoring and shooting 3 of 5 from behind the arc.

"I think that a lot has to do with the fact they [Hapoel] put a lot of pressure on Keith Langford. The fact they double-teamed him created more space for the rest of us, so I would definitely give credit to Langford," the Cuban said.

Sant-Roos stayed on the floor for the entire 40 minutes, becoming the first player this season to display this remarkable stamina in two different encounters. He had also played the entire game in the reverse fixture on Gameday 2, when AEK lost 85-78 to Hapoel in Jerusalem.

Only Oldenburg's Chris Kramer, who played three entire 40-minute games and one 45-minute game in the 2016-17 season, can boast of a higher level of endurance than Sant-Roos. Kramer had been referred to back then, at least on one occasion, as 'Iron Man'.

"I don’t consider myself Iron Man, everyone knows that my nickname is Loco [Crazy in Spanish], so if you guys want to call me something, I prefer you call me Loco. Iron Man is definitely not for me," Sant-Roos said with a laugh.

I am trying to be a two-way player, but I consider myself more of a defensive player, I take pride in playing great defense - Howard Sant-Roos

"I've been doing this for a while now, this is not the first season that I play 40-minutes games, so it's got to a point where I am used to it.

"The older I get for sure it gets a bit more tiring, but I guess my stamina is abnormal," he added laughing.

The AEK forward is averaging an efficiency rating of 20.2, the fifth-highest in the league so far this season. He is leading his team in rebounds and assists, with 6.6 and 4.4 per game respectively, while averaging 13.8 points per game as AEK's second-leading scorer behind Langford.

📺 @AEKBCgr had more gas left in the tank in the final stretch of a tight game to celebrate a 91-78 victory! #BasketballCL

To many league observers, if there were a 'Best Two-Way Player in the BCL' award, Sant-Roos would be at the top of the list of candidates.

"I am trying to be a two-way player, but I consider myself more of a defensive player," he said.

"I take pride in playing great defense, I always want to do that for my team."

There isn't an award for Defensive Player of the Year, either. And there are definitely no prizes for guessing who would have been the top candidate to win it. 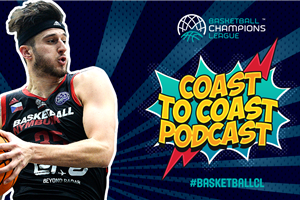 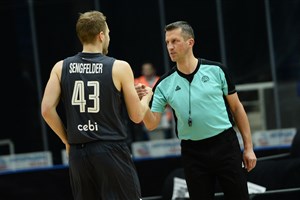