MIES (Switzerland) - Did you know that double-overtime games are a lot like buses, that Gameday 7 was the most prolific in the 2019-20 Basketball Champions League and that we have just witnessed some historically embarrassing results ?

📺 @Angola2411 scored the game-winner to lift Oostende to an 105-103 victory in a memorable double-overtime thriller! #BasketballCL

You wait for a double-overtime game for ages and then two arrive on the same Gameday! On Tuesday, Filou Oostende outlasted Polski Cukier Torun 105-103 after two extra periods and on Wednesday we had yet another double-overtime clash in which the hosts had the last word, as Casademont Zaragoza prevailed 96-93 over Happy Casa Brindisi.

Filou Oostende scored 35 two-pointers (in 59 attempts), more than any other team in a single game this season and the second-most in competition history after MHP Riesen Ludwigsburg, who made 36 shots from two-point range in their 99-56 win over Szolnoki Olaj back in November 2016.

Zaragoza meanwhile brought down 61 rebounds on Wendesday, becoming only the fourth team in competition history with at least 60 rebounds in a single game. The absolute record belongs to Iberostar Tenerife, who had 65 rebounds in their win over Opava in January 2019.

Gameday 7 was the most prolific so far this season as the 32 teams scored a total of 2,632 points, which translates into a combined score of 164.5 points per game.

This was partly down to the fact that 660 minutes were played this week, compared to the 640 minutes of a 'normal' week (we saw why above), but also due to some stellar offensive displays.

For example, JDA Dijon scored more than 90 points on the road for the first time in competition history. Dijon's 98 points in their win at Besiktas Sompo Sigorta are also the highest offensive output by a visiting team at the Istanbul side's homecourt in the BCL.

Meanwhile Hapoel Bank Yahav Jerusalem became the first team this season to have seven players scoring in double digits, in their 94-72 win over Telenet Giants Antwerp, and AEK scored more than 10 three-pointers in a third consecutive BCL game for the first time since January-February 2017.

On the other end of the spectrum, Brose Bamberg were the least productive team this week, scoring only 64 points in their loss at Iberostar Tenerife. The German side are now the team with the worse offense in the competition, averaging 71.1 points per game.

Besiktas's 33-point loss to Dijon was the Turkish team's largest ever defeat in the BCL, with the point differential twice as wide as in their previous joint-worse losses. Besiktas had lost by 16 points to Sidigas Avellino in December 2017, and to medi Bayreuth in December 2018.

Neptunas narrowly escaped the same embarrassment on Wednesday, as their 24-point loss at Falco Szombathely only matched the 24-point differential of their 102-78 defeat to medi Bayreuth in November 2018. And yes, you noticed that correctly, Bayreuth were handing out embarrassing losses like candy back in autumn-winter of 2018.

If you thought that the Jordan Davis who made his debut with RASTA Vechta on Tuesday, scoring 35 points in a losing effort against San Pablo Burgos, is just a namesake of the Jordan Davis who played for BAXI Manresa in the first weeks of the season, you have made an understandable mistake.

The American guard had scored a combined 32 points in his three games for Manresa, while his Tuesday display tied the BCL season-high of Nicolas De Jong on Gameday 4.

Chris Wright was also on a losing team this week, but the Torun guard became the first player to score 30 points or more in multiple games this season: Wright had 31 points in the Tuesday loss to Filou Oostende, and he had scored 30 points against Dinamo Sassari on Gameday 4.

🧨 Lamonte Ulmer is the first player combining for 20+PTS, 5+REB, 5+AST and 5+STL in a single #BasketballCL game ever! pic.twitter.com/FxurzXY2Hv

Dijon’s Lamonte Ulmer, who earned a spot on Team of the Week, became on Tuesday the first player in BCL history to collect at least 20 points, 5 rebounds, 5 assists and 5 steals in a single game. Ulmer's 7 steals in the win over Besiktas would have been an all-time BCL record were it not for his current team-mate Jérémy Leloup, who came up with 8 steals a game against Union Olimpija in October 2017, when he was playing for SIG Strasbourg.

Ricky Ledo of Anwil, who had 25 points and 10 rebounds in the defeat to AEK, is only the second player to register a double-double with the Polish team in the BCL. Kamil Laczynski had 10 points and 12 assists against Sidigas Avellino in October 2018. Team of the Week: Toolson, Perl, Ulmer, Margaritis and Grant 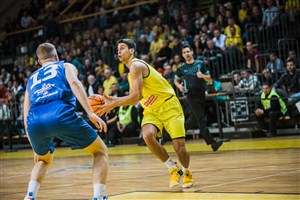