The veteran power forward was the driving force behind the 87-71 Burgos win over RASTA Vechta at home on Wednesday night. The success sealed third place in Group B and, more importantly, a berth in the Play-Offs for the Spanish newcomers.

If you lose one game in the Play-Offs it can hurt you. You cannot lose focus, you have to go out to win every game - Earl Clark

Clark finished with a double-double of 21 points and a BCL season-high 12 rebounds, also adding 4 blocks and 3 assists, for a BCL career-high efficiency rating of 28.

The 32-year-old American had previously been named on Team of the Week in the 2016-17 season, when he was playing for Besiktas, but he earns the MVP distinction for the first time in his career.

He knows by now that breaking new ground in Burgos will come at a personal cost, off the court.

"It's weird here in Spain," the Gameday 14 MVP told championsleague.basketball with a laugh.

"I got MVP twice in the Spanish league (for week 3 and week 9 in the Liga Endesa) and usually if it's your birthday or if you win an award, your teammates get you something.

"But here, I was the one who had to bring pizza! Even on my birthday I was like 'am I not supposed to get a gift'?

"So they will probably make me buy pizza or a cake or something!"

The Wednesday game unfolded for Clark in a manner as surprising as Spanish customs.

The veteran had a very discreet presence in the opening quarter, but he came back on the court in the second frame and collected 16 points, 6 rebounds and 2 blocks in the final eight-minute stretch before halftime.

"I didn't start the game the way I wanted to, I had two turnovers and so when I came out, I just went to the bench and tried to regain focus and play my game," Clark said.

"When Papi [Jasiel Rivero] got two fouls I went back in the game and I knew it was my opportunity to help the team win this important game.

It's pretty cool to be in the Play-Offs, the Burgos fans really deserve it - Earl Clark

"I felt that it was an opportunity to [lead the team], I started getting some good looks, my shot felt good, so I was just trying to do what I have been doing all season, just wait my turn and play with the flow of the game.

"I definitely wanted us to advance in the Basketball Champions League, so I just tried to play my best."

Clark has been in the Play-Offs of the competition twice before, both with Besiktas. In the 2017-18 season he was team-mates on the Turkish team Augusto Lima, and several other Burgos players have considerable relative experience.

For those who don't, Clark has a simple message with regards to what they need to think about going into the Play-Offs.

"Just cherish these moments," he said.

"If you lose one game in the Play-Offs it can hurt you. You cannot lose focus, you have to go out to win every game.

"Basically, if you win the first game then a lot of the pressure is off, so if we can do that, I think we will be in great shape."

Burgos will find out their next opponent at the Play-Offs Draw, on February 18. No matter which team they have to face in the Round of 16, Clark is certain the fans will vastly enjoy this first taste of postseason action.

"It's pretty cool to be in the Play-Offs, because the fans here really deserve it," he said.

"In Burgos we have great fans, they support the team no matter if we win or lose, so I think just for that fact, it's great."

Weather conditions in Burgos are famously windy and cold, but fans pack the Coliseum arena every night, transmitting the warmth of a 10,000-strong dedicated crowd to the players. Maybe that is why Clark does not even regard weather in Burgos to be that cold.

"I will have to say Cleveland cold is the worse, when I was there it snowed every day. It's pretty cold in New York as well, but Cleveland was both windy and cold," he said. 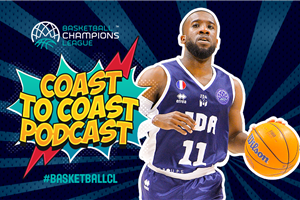 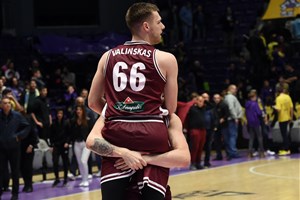